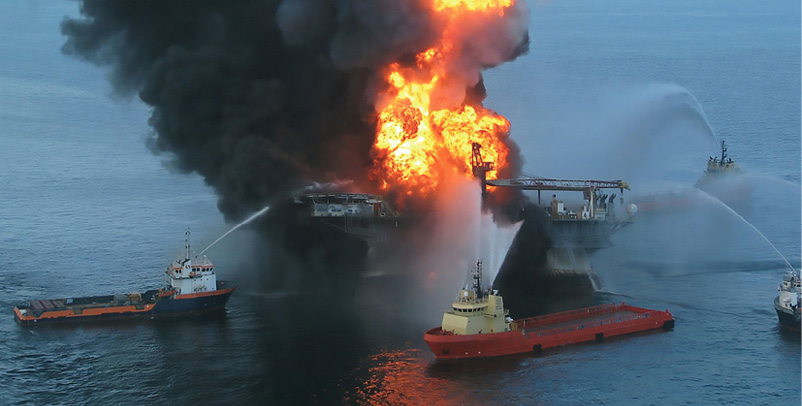 On the night of April 20, 2010, a flow of oil, gas, and mud erupted onto the floor of the Deepwater Horizon drilling vessel from the oil well below. As workers realized they were losing control of the well, they tried to activate its subsea blowout preventer, a massive device that’s supposed to sever the drill pipe and seal it shut. But the outpouring continued. A plume of gas filled the rig floor and ignited, triggering two explosions and a fast-moving fire. The crew evacuated.

Eleven people were killed and 17 more seriously injured in the disaster. During repeated efforts to seal the well over the following months, somewhere between 3 and 5 million barrels of oil gushed into the Gulf of Mexico in the worst maritime oil spill in history.

Later investigations concluded that one set of rams that should have sheared the drill pipe was never properly triggered. The other set closed on the pipe but, because the pipe had bent or buckled, failed to shear it completely.

The blowout was not contained, and the rig was subsequently lost.

One company involved in those investigations, Bastion Technologies Inc., gets most of its business from NASA. Now the Houston-based company is using knowledge gained from its years of experience with the Space Agency to prevent such disasters in the future.

Since its first contract with Johnson Space Center in 2002, Bastion has picked up work at most of NASA’s field centers, primarily working in safety, mission assurance, and structural analysis. Not long after, the company started working in oil and gas, often applying expertise and lessons learned from planning for the rigors of space travel. Bastion’s first work with offshore-drilling giant Transocean was to develop a method of connecting and disconnecting a well’s blowout preventer and its lower marine riser package, for example in the event of a storm. For that project, Bastion came up with a design based on experience it had with technology for docking spacecraft to the International Space Station.

With this experience, Bastion approached Transocean, which owned and operated Deepwater Horizon, to help analyze possible causes of the disaster and identify technology to prevent another one.

To solve the oil well problem, the company again used its experience with both NASA technology and the Agency’s rigorous systems engineering methodology.

Virtually every subsea blowout preventer relies on a series of compressed-gas tanks to power its critical systems. These tanks when triggered, push pistons that force hydraulic fluid against the rams that shear and seal the well. This was where Bastion identified a weakness. “We said, they’ve got to get away from compressed gas,” says Bastion President and CEO Jorge Hernandez.

Increased water pressure at ocean depths offsets the gas pressure in the tanks, he explains. “The deeper and deeper you get, efficiency just goes down the drain.” Another problem is that, as the gas is released, it generates steadily less pressure, and in the end, very little of the hydraulic fluid is actually ejected from the accumulator. The tanks, of which there may be dozens in a single system, are also heavy, producing increased stress on the well, and the systems simply aren’t sufficiently reliable, Hernandez adds.

“One of our NASA guys said, how about we use a propellant?”

Marshall Space Flight Center, where Bastion has worked for the last 12 years and where it serves as the prime contractor for safety and mission assurance, is where rockets are built and tested, including propulsion systems. The company also has employees at Stennis Space Center, which is primarily a rocket testing facility. “So we have quite a bit of propulsion-systems background,” Hernandez says. Many of the people Bastion has hired for a contract at the Jet Propulsion Laboratory (JPL) previously worked on the Curiosity Mars rover, Mars Pathfinder, and other systems that used solid propellant to inflate airbags or shear parachute cords.

Bastion’s idea was to replace pressurized gas with a solid propellant that would expand into gas when burned, generating a high-energy force.

“It was really just our NASA guys who worked on it,” Hernandez says, noting that these were primarily the Bastion employees who work at Johnson, Marshall, and JPL.

The team settled on a hybrid solid propellant, something between the explosive propellants used to inflate airbags and the slow-burning, lower-pressure ones used in solid rocket boosters. But it’s not a simple system, and it was the team’s NASA experience working with fuses, igniters, electronics, batteries, and software that made the idea a reality, Hernandez says. The company also brought to bear its primary NASA work of safety and mission assurance.

The first SureShear system was built in 2014, and the company was awarded a patent for it the following year. In early 2016, Bastion demonstrated the system for officials from the Bureau of Safety and Environmental Enforcement, which regulates offshore drilling, resulting in SureShear’s official recognition as a drilling safety technology. The next year, the company tested a full-scale, subsea-ready version at the Transocean test facility.

Today, Bastion continues working with drillers and operators on subsea testing and seeking other commercial partners for collaborative development and deployment.

SureShear is more than 99.9 percent reliable, Hernandez says. “The key to our system is that we’re using all the hydraulic fluid.” Because the burning propellant continues to expand into gas until the piston travels the full length of the pressure chamber, pressure never flags and all the fluid is expelled behind the rams that shear the drill pipe.

The system also generates significantly more power than conventional alternatives. Compressed-gas-based accumulators can only store gas at pressures up to around 6,000 pounds per square inch (psi), making that the most force they can ultimately exert on a drill pipe. Higher pressures would require thicker, heavier tanks, and the systems are already ungainly. Bastion’s system, on the other hand, isn’t pressurized until the propellant is ignited on the ocean floor, where the surrounding water pressure counteracts the internal pressure, ensuring the tank’s integrity. The company expects SureShear to be able to achieve pressures of at least 10,000 psi—more than enough power to sever so-called “unshearables” like drill collars, should they end up between the rams.

The system’s cutting power also allows it to be far smaller than traditional compressed-gas accumulators. A rig that might have required 10 compressed-gas-based accumulators totaling 70,000 pounds and taking up 314 cubic feet can instead use an 8,000-pound, 38-cubic-foot SureShear system. This reduces costs and increases capability for the driller, who can now drill in locations that are extremely sensitive to the weights and stresses exerted on the subsea conductor pipe. “What’s killing them is the weight of the material,” Hernandez says. “They want to keep the size down as much as possible.”

The solid propellant has a guaranteed lifetime of at least 10 years in subsea conditions. And the arming and ignition subsystems use technology proven to NASA and military reliability standards.

Jeff Cardenas, who has worked in the oil and gas industry and is now operations manager on Bastion’s JPL contract, notes that industry tends to view major investments in training, planning for an entire project’s life cycle, and taking every safety precaution—NASA’s approach—as inefficient. However, says Hernandez, “If we hadn’t had that NASA experience, we wouldn’t have been able to design and build SureShear.”

Abstract
After Bastion Technologies Inc., a company with a long history at Marshall Space Flight Center and other NASA locations, helped investigate the Deepwater Horizon oil spill, the company sought a way to prevent such a disaster. Using the knowledge of propellants, mission assurance, and structural analysis its employees gained at NASA, the Houston-based company invented its SureShear product for subsea blowout preventers. Rather than using pressurized gas, SureShear burns a solid propellant to power rams that quickly and reliably shear and seal a well’s drill pipe.

This 15,000-pound SureShear system can replace 170,000 pounds of compressed-gas tanks that power a traditional offshore oil well blowout preventer, and it can sever the drill pipe about three times as fast. 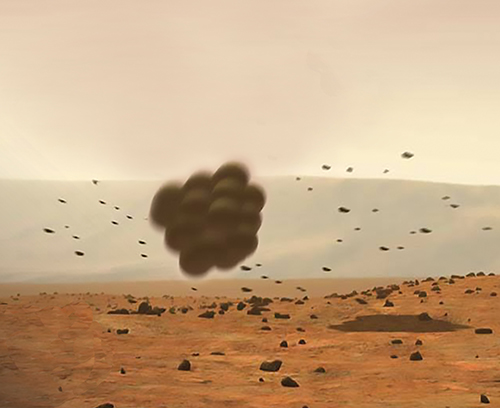 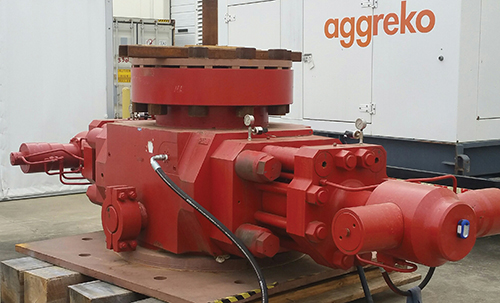 At demonstrations in late 2018 and early 2019, Bastion showed major players in the oil industry how five of its SureShear chambers could power the very blowout preventer, shown here, that failed to completely sever and seal the drill pipe in the Deepwater Horizon disaster.

Explosions that destroyed the Deepwater Horizon drilling vessel in 2010 were just the start of a disaster that resulted in millions of barrels of oil gushing into the Gulf of Mexico over the following months. Bastion Technologies helped well owner Transocean look for the cause of the debacle and ultimately came up with a way to prevent such disasters in the future, based on the company’s experience working with NASA.