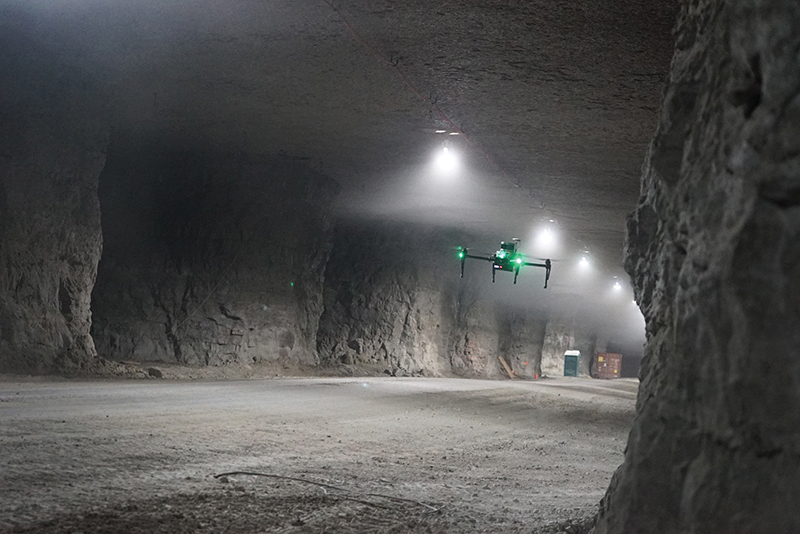 Self-piloted drone traffic may be just over the horizon, metaphorically speaking, but for now, vehicles cannot legally fly beyond the operator’s line of sight, at least not without special permission. While the Federal Aviation Administration (FAA) works to craft drone regulations and engineers work to build the features that would meet those rules, however, some of this new technology is opening up applications that don’t involve flying across town.

Using unmanned aerial systems (UAS) to inspect buildings, bridges, and other infrastructure, for example, or survey disaster sites doesn’t necessarily require FAA compliance. An impediment to this sort of application, though, has been reliance on the GPS signals that such structures can obstruct. Without GPS, drone navigation drifts, making it difficult to register data from onboard sensors and, eventually, causing instability. With NASA’s help, Pittsburgh-based Near Earth Autonomy is breaking drones’ dependency on GPS.

NASA has taken a leading role in pioneering and fostering the advances necessary for safe autonomous flight, establishing its UAS Traffic Management (UTM) project, centered at Ames Research Center, in 2015. That year, Ames granted Phase I and II Small Business Innovation Research (SBIR) contracts to Near Earth Autonomy to build the technology for safe, self-piloted takeoff and landing without the use of GPS or maps.

As the UTM project brings on commercial partners, it directs them to focus efforts on the areas of need it has identified for future autonomous air traffic, says Parimal Kopardekar, the project’s principal investigator. “One of the challenges we need to solve for drone traffic management is the ability to operate without GPS,” he says.

That’s partly because one of the FAA’s requirements will be the ability to navigate in the event of a GPS outage and because GPS signals can often be degraded at low altitudes in urban areas—exactly where the highest precision is needed.

The problem is that most automated navigation systems start by determining their location with GPS, Kopardekar says. Devising a good alternative is challenging, not least because a small drone has limited power and can’t carry much weight. “Whatever sensors we put on a drone have to have very low size, weight, and power.”

Near Earth Autonomy’s SBIR work focused on safely navigating the most difficult parts of a flight—the first and last 50 feet, says Sanjiv Singh, the company’s CEO and cofounder. In practice, this meant flying entire, short missions with no GPS whatsoever. “If we didn’t use any GPS, we can certainly deal with a GPS outage.”

The company managed GPS-free navigation with a tricky technique known as simultaneous localization and mapping. As it flies, the drone has to build a map of its surroundings while tracking its own movement through that environment. An onboard lidar scanner senses physical surroundings and their distances by measuring how long laser pulses sent in all directions take to bounce back to a sensor. Meanwhile, inertial sensors record the craft’s movements, assisted by a camera for visual tracking. Singh and his team had to create their own algorithms to continually process all of that data and “successively stitch together a map and use it to navigate,” he says.

And the company was able to do it using small, state-of-the-art commercial components, minimizing the weight and cost of the payload.

“We’ve sort of shot ahead from a technical standpoint to show you could do this,” Singh says. “This is the capability we demonstrate that gets more attention than almost anything we do.”

Kopardekar says NASA will have an interest in the technology not just for drone traffic management but also, for example, for missions over the poles, where GPS signals don’t reach.

In the long term, Singh hopes the capability to navigate without GPS will help make FAA drone regulations a reality. “We can take our results and say, ‘This is what such a system looks like, this is the complexity of such a device, what elements are involved, what conditions it works under.’”

And it could one day enable capabilities such as autonomous urban transport and delivery.

For now, though, Near Earth Autonomy has—somewhat unexpectedly—received the most interest from entities that want drones to be able to navigate near or inside large, potentially GPS-disrupting structures. A group from Japan, interested in disaster site surveillance, is working with the company. Others are interested in inspecting buildings, tunnels, bridges, tanks, and towers. The military wants to map buildings, as well as carry out drone reconnaissance that isn’t vulnerable to GPS denial.

The company has sold a few prototypes and is working with commercial and government entities to adapt the technology to specific applications and bring costs down. For different types of inspections, for example, drones will need different sets of tools and sensors. As Singh puts it, “Yes, it can fly in a building, but what’s it doing in the building? How are people using it?” These are the questions the company is working with potential customers to answer.

But Singh says he might not be asking them if not for the UTM project. “The NASA SBIRs were extremely productive, relevant, and timely. They allowed us to take some chances and develop and demonstrate this technology and get a lot of interest.”

Abstract
When regulations are issued to allow self-piloted drones to fly beyond operators’ line of sight, one requirement will be that they be able to navigate without GPS. SBIR contracts from Ames Research Center funded one company’s development of a simultaneous localization and mapping system that can do just that. Pittsburgh-based Near Earth Autonomy has sold prototypes of the technology and is working with companies and agencies to adapt it for disaster site surveillance, building and infrastructure inspection, and military reconnaissance.

Near Earth Autonomy’s simultaneous mapping and localization system builds a map of a drone’s surroundings, such as this network of tunnels, while it tracks the craft’s movement through that environment.

Outfitted with Near Earth Autonomy’s technology, a drone can navigate without GPS, letting it find its way through tunnels and other areas where satellite signals are blocked.