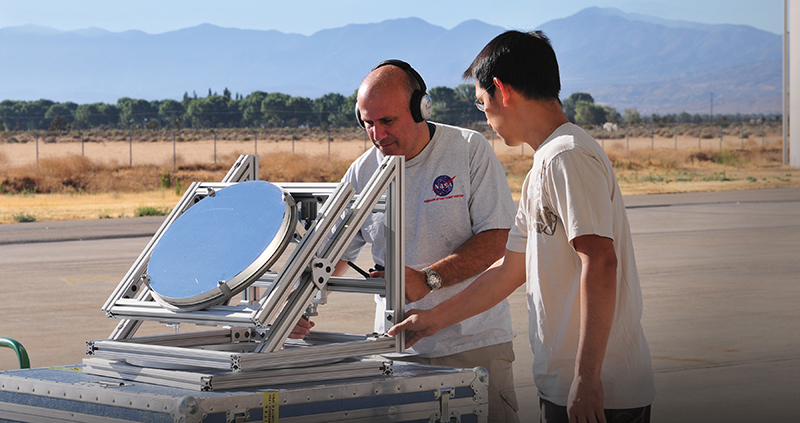 Since the invention of lasers in 1960, engineers have found countless ways to create these coherent, monochromatic beams of light and have harnessed them for just as many purposes. Light can behave in different ways, depending on its wavelength and intensity. Now, cutting-edge advances that one company made for NASA have resulted in better lasers for gas sensing, and they’re likely to improve laser-based structural monitoring and medical imaging.

To understand climate change, it’s important to monitor greenhouse gases in the atmosphere. While we have been measuring carbon dioxide from satellites, though, the technology for satellite detection of methane, a more powerful greenhouse gas, didn’t exist until recently.

By 2016, NASA engineers were working to eliminate that blind spot. Haris Riris, an optical physicist in the Atmospheric Chemistry and Dynamics Branch at Goddard Space Flight Center, had been leading a team working to develop a lidar called the Methane Sounder to measure methane. It would send a pulsed laser beam into the atmosphere and analyze the reflected light to detect the presence of methane in the air. It would be able to detect methane through most cloud cover and at night, unlike passive spectrometers that use reflected sunlight to detect the gas.

There are a few different wavelengths of light that can be used to detect methane, but the one that runs into the least atmospheric interference and delivers the best results is the near-infrared wavelength of about 1,650 nanometers, which has been difficult to generate with lasers. And the team wanted the laser to rapidly scan from a slightly shorter to a slightly longer wavelength. There was no commercially available laser that met these requirements.

A company called Freedom Photonics LLC, based in Santa Barbara, California, was working at the time under a pair of Small Business Innovation Research (SBIR) contracts with Armstrong Flight Research Center to develop a wavelength-swept laser. That means it can tune linearly across a range of wavelengths at speeds of hundreds or thousands of times per second.

The company specializes in chip-scale semiconductor lasers, which are much smaller, cheaper, simpler, and more energy-efficient than other types of tunable lasers. Riris notes that the company’s lasers are enabled by the use of specialized reflectors in the laser cavities, known as distributed Bragg reflectors, which let them rapidly tune across wavelengths without creating any adverse effects.

In 2016, NASA selected Freedom Photonics to receive funding through the Tipping Point Technologies program to build a high-power, narrowly tunable laser to support Riris’ Methane Sounder. That same year, the company won two SBIR contracts with Goddard to develop a separate, lower-powered, widely tunable laser around the same wavelength that could sense other gases in addition to methane.

For the widely tunable version, “we had to start from scratch, with a different semiconductor material, and design a device that works with its properties,” says Milan Mashanovitch, Freedom Photonics’ cofounder and CEO. “But the methods used to package the laser into a module and align the optical fiber and plug it into the system are shared.”

He says creating the narrowly tunable laser for the Methane Sounder, which is an order of magnitude more powerful than any tunable laser the company had built before, was even more of a technical challenge.

Riris says attaining that higher power meant changing the entire architecture of the laser. “There were doubts about whether it could be done,” he recalls. “But it’s all semiconductor physics, and they’ve got a good handle on it.”

He says the high power would make the methane sensor more accurate, while the semiconductor laser design makes for a simpler, smaller, cheaper lidar.

The simplicity, high reliability, and attendant low cost, size, weight, and energy consumption are the main advantages of a semiconductor laser, says Mashanovitch.

“Semiconductor lasers are made on a semiconductor wafer, and you can make thousands of those laser chips on a single wafer,” he says, noting that the result is “a 10-times reduction in cost” when compared to solid-state lasers, which typically involve multiple laser sources and other additional components.

The widely tunable 1,650-nanometer-wavelength laser built under Goddard SBIR funding is commercially available, with most customers using it in gas-sensing applications. Freedom Photonics sells its lasers to customers who incorporate them into end products. In addition to environmental monitoring, gas-sensing applications can include looking for emissions from oil and gas wells, locating leaks in gas lines, running safety checks at chemical plants, or even measuring methane output from cattle feedlots. Mashanovitch would like to see them deployed on drones, which wouldn’t be possible with larger, less-efficient traditional lasers.

He also sees a future for the laser in what’s known as fiber sensing. Fiber-optic cables on or embedded in the surface of a structure, such as an aircraft wing or a pressure vessel, are inscribed with periodic distributed Bragg reflectors—the same structures used in Freedom Photonics’ laser cavities. As a laser is shone down the length of the fiber, the Bragg reflectors bounce back only a select few wavelengths of light, transmitting the rest. By observing changes in the frequencies that are reflected or transmitted, a computer can detect changes in temperature, strain, and other characteristics of the surface, which is useful for structural health monitoring.

This was the application for which Armstrong first contracted the company. Freedom Photonics’ solution replaced a mechanically tunable laser Armstrong was using for fiber sensing with a unit that is 5 to 10 times cheaper.

Mashanovitch says customers interested in fiber sensing would benefit from the ability to extend its lasers’ ranges into the 1,650-nanometer region of the spectrum, but the company first needs a tunable laser that can bridge the gap between about 1,570 and 1,620 nanometers. “It will happen,” he says.

The wavelength-swept laser capability developed for Armstrong, which required changes to both the laser chip structure and the control electronics, will also find commercial applications. For example, fast sweeping across frequencies is necessary for optical coherence tomography, a high-resolution imaging technique used in ophthalmology, cardiology, dermatology, and other disciplines. It’s a field the company is getting into, having found several customers for lasers incorporating the chips it developed for Armstrong, and Mashanovitch says Freedom Photonics has combined the chip and control electronics for sweeping into a single module that’s available for customers to try out.

“At all wavelengths, this is going to be the highest-performance swept laser available,” he says.

“This has helped us on many fronts,” Mashanovitch says of the NASA work. “It’s an opportunity to work with expert users, helping us to become better at what we do and helping us move into these new markets more successfully.”

Abstract
SBIR and Tipping Point contracts from Goddard Space Flight Center helped Freedom Photonics of Santa Barbara, California, develop tunable lasers for sensing methane and other gases. The lasers are much smaller, cheaper, and more efficient than alternatives and have possible applications in environmental monitoring, the oil and gas industry, and other fields. Advances made under Armstrong Flight Research Center SBIR funding have helped the company develop capabilities that could be used for structural monitoring and medical imaging.

The company originally developed its 1,650-nanometer-wavelength tunable laser with SBIR funding from Goddard, and it’s now available for gas-sensing applications like monitoring the atmosphere and looking for emissions at oil wells, gas lines, and chemical plants. 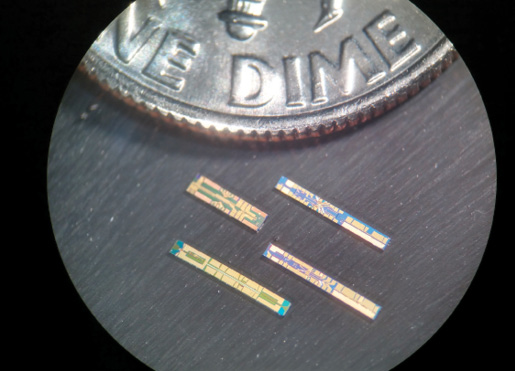 Freedom Photonics’ tiny laser chips are dwarfed by a dime.

Haris Riris, left, principal investigator for the Methane Sounder at Goddard Space Flight Center, and Stewart Wu prepare a prototype of the device before test flying it in 2011. Freedom Photonics later developed a laser for the sounder, leading to advances the company is turning into commercial products for gas sensing.