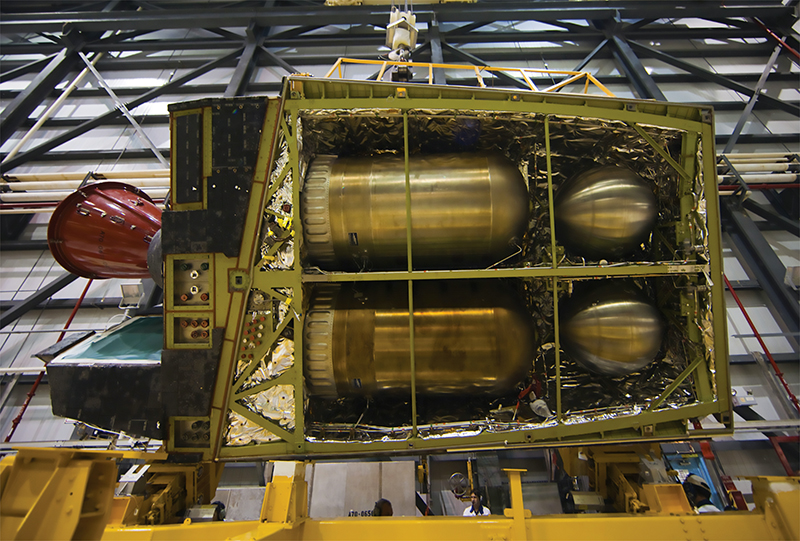 Few people will ever pass a rocket on the freeway, but anyone could soon see the “gas tank” of a liquid propulsion engine outside the passenger window. That’s because a modified design of this unique fuel tank, called a composite overwrapped pressure vessel (COPV), was approved by the U.S. Department of Transportation for use on American roads.

Pressure vessels, used in everything from spacecraft to gas grills, hold and dispense liquid or gas under pressure. Most, like the propane tank underneath your grill, are made entirely of metal and are heavy, but COPV technology promises to improve on that standard. A COPV uses only a thin metal lining to contain its contents, over which a composite fiber is wrapped. The composite provides most of the tank’s strength, and because composites are much lighter and stronger than the metals they replace, COPVs can holdat higher pressures than their all-metal counterparts. This means that a lighter and smaller tank can hold the same amount of gas as a larger, heavier metal one—or that a similar-sized COPV can hold more.

NASA pioneered COPVs in the 1960s and ’70s (Spinoff 2019), but advances in composite materials and improved manufacturing in the ’80s and ’90s inspired Tom DeLay to investigate ways to make a better COPV. Working in the Materials Lab at Marshall Space Flight Center, DeLay was the composite manufacturing team leader supporting multiple projects, including experimental airplanes, or X-planes.

The X-planes testing new technologies at that time included X-33, X-37, and X-43A, and they all needed the same thing—a lightweight tank for high-pressure gases. The higher the pressure, the more fuel a tank can hold. The more fuel a plane can carry, the more it can accomplish in a single flight. DeLay also saw that a better COPV could benefit liquid propulsion rocket engines such as those used in the space shuttle.

Early designs used a metal cylinder, usually made of steel, aluminum, or titanium. The overwrap was a fiber soaked in a resin or epoxy. The fibers provided tensile strength for structural integrity, while the resin carried shear loads in the composite and secured the position of the fiber over the vessel exterior.

The first resin-soaked material was fiberglass, but that soon gave way to lighter options such as Kevlar and carbon fiber. The resin or epoxy used to soak the fibers has also changed over time. Different “recipes” were developed to meet different requirements.

Meanwhile, DeLay’s continued research and testing at NASA improved the technology, which includes an all-composite COPV that replaced the metal liner with plastic. In various forms, these updated pressure vessels are a part of many NASA missions, used as storage tanks in the space station and the Orion crew and service modules. Today nearly all NASA missions include COPVs—rockets, launch vehicles, satellites, and landers.

In addition to making him an expert on COPVs, DeLay’s extensive experience inspired him to find new applications for the technology and pursue its commercialization through entrepreneurial efforts.

In 2008, DeLay founded Cimarron Composites LLC to take COPV development to the next level. In addition to licensing several of the original patents DeLay worked on while at NASA, the Huntsville, Alabama, company entered into a Space Act Agreement with Marshall in 2018.

“I’ve got some really nice resources at Cimarron related to manufacturing and testing with high-pressure liquid nitrogen,” he says. “But hydrogen testing is very difficult. That’s where the Space Act Agreement is nice—NASA test facilities are unique. They can handle things nobody else can deal with.”

That includes cryogenic proof tests, cycle tests, and all of the testing required for Department of Transportation qualifications of pressure vessels.

Through company work, DeLay created multiple proprietary resin and carbon overwrap systems and invented a new plastic pressure vessel, eliminating the need for the conventional metal lining. The all-composite COPV is slightly different in that the plastic lining is non-load sharing, making the system dramatically lighter. This all-composite COPV was the structure that went to Marshall for liquid hydrogen testing.

The partnership is paying off for both NASA and Cimarron, according to DeLay. “Government funds paid me to learn all of this, and I created the patents. The licensing and Space Act Agreement fees mean that initial investment is paid back, and then some.”

Numerous private-sector space companies are among those taking advantage of the improvements Cimarron is making on NASA technology. The company produces COPVs that routinely fly in a commercial launch vehicle and is developing ultra-light COPVs and composite fuel tanks for several start-up companies building smaller launch vehicles.

“There’s a miniature space race going on right now,” explains DeLay. “The knowledge NASA developed over decades for space applications is now filtering into the new aerospace companies that are popping up.”

Transportation companies in the business of moving highly volatile liquids and gases on Earth can also take advantage of these NASA-derived COPVs. Safely shipping gases such as methane and hydrogen on U.S. highways requires a vessel that has passed the rigorous certification process of the Department of Transportation. The tanks must be able to survive everything from a crash to a gunshot without fragmenting. That makes some of the testing for space seem simple, according to DeLay. Most of NASA’s COPVs are protected—encased in a rocket, inside a vehicle, or in the space station. “On Earth it has to handle all kinds of environments,” he says. “For certification, you have to set it on fire, drop it, and pressure cycle it 30,000 times. It has to last for years, not just a single use as in space applications.”

The Cimarron Jupiter COPV is the only large type-4 composite tube certified by the Department of Transportation. The 30-inch-diameter, 18.5-foot-long plastic tube has a carbon overwrap and can be used for stand-alone transportation. Or it can be stacked with multiple tubes on a trailer, making it possible for a company to haul more fuel in a single load.

Cimarron is currently developing a 7,500-pound-per-square-inch hydrogen tube called Neptune, which will be instrumental in the development of hydrogen fuel cell systems for transportation.

The same need to carry more fuel and save weight is also a priority for the water-borne shipping industry. Cimarron is currently working on a customer request to make COPVs for ships.

Abstract
The “gas tank” of a rocket holds fuel in the form of liquid or gas, and those special tanks will now be used for moving similar substances on Earth. Huntsville, Alabama-based Cimarron Composites LLC is licensing several of the original patents and leveraging a Space Act Agreement to commercialize this space technology. The new composite overwrapped pressure vessel approved for highways by the U.S. Department of Transportation started with work done at Marshall Space Flight Center.

This empty, 10-pound Cimarron Composites COPV can hold up to 25 pounds of pressurized liquid hydrogen.

NASA stores fuel in composite overwrapped pressure vessels (COPVs)—an early NASA invention—like those in the space shuttle Endeavour’s orbiter maneuvering system. A Cimarron Composites version of this technology, called the Jupiter, passed the rigorous testing mandated by the U.S. Department of Transportation for certification to travel on U.S. roads. These COPVs will also carry liquids and gases under pressure. The higher the pressure, the more a tank can hold.