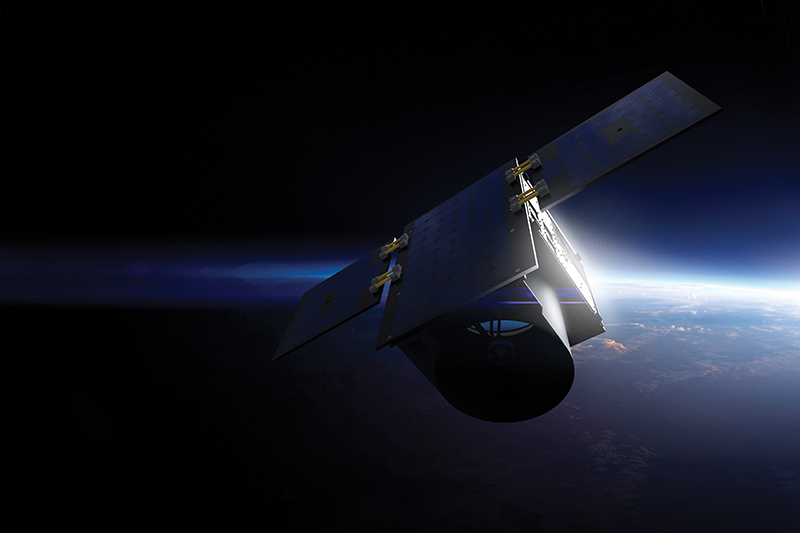 NASA has been planning for a water-powered rocket engine since the Agency’s early years. After all, water is made of hydrogen and oxygen, which have been powering the Space Agency’s rockets since the 1960s. Hydrogen produces the highest exhaust velocity of any rocket fuel, and the oxygen helps it burn. All it takes to separate water’s two elements is an applied electrical charge.

But the technology at the time was considered complex and had disadvantages, too, such as its size and weight and the limited power available for electrolysis, notes a 1997 Glenn paper detailing the performance of another, more advanced water-electrolysis engine prototype. Yet even today, the concept remains integral to NASA’s deep-space exploration plans, which rest partly on the ability to find water on other worlds or asteroids and turn it into rocket fuel.

During decades of experimentation, though, no one actually produced a practical water-electrolysis engine. Until now.

“Managing hydrogen and oxygen and superheated steam, there are a lot of materials issues, like corrosion,” says Robert Hoyt, cofounder and CEO of Tethers Unlimited Inc. (TUI). “You have to be very careful with materials throughout the device to avoid corrosion and make sure the electrolysis components are not contaminated by any other materials.”

With this in mind, and with NASA’s help, the Bothell, Washington-based company has built the first viable water-electrolysis engines. Currently, NASA’s interest in the technology stems from its effort to advance the state of technology for CubeSats—tiny, low-cost satellites built with off-the-shelf parts.

“Until the early 2000s, the smallest spacecraft up there was still over 500 pounds,” says Ames Research Center’s Elwood Agasid, who has been involved with various stages of TUI’s work on the electrolysis thrusters. Before, only major corporations built satellites, which required large investments of time, money, and R&D. But as manufacturing costs came down, and especially as CubeSat kits became available, access to space launch opened up to more players, Agasid says.

NASA now regularly carries little satellites built by universities, start-ups, and others into orbit as secondary payloads through programs like its CubeSat Launch Initiative. But the Agency is also enhancing small satellites’ capabilities to use them more in future exploration and science missions.

As part of the Space Agency’s overall effort to foster CubeSat innovation, in 2010, NASA’s Small Business Innovation Research (SBIR) program released a solicitation for propulsion systems for the mini-satellites, and TUI was one of the respondents selected to receive funding through Ames. Agasid was the contracting officer representative for the two SBIR contracts. “Their approach seemed sound and addressed the issues of water containment and generating sufficient power to enable electrolysis,” he says.

At the time, CubeSats didn’t have propulsion systems. Building small enough thrusters has been a challenge. And Agasid says there are concerns about allowing pressurized propulsion systems aboard launches. As a result, CubeSats have largely been stuck with the orbit of the primary payload they hitched a ride with, unable to change their altitude or maintain their orbit long-term.

Under NASA’s Tipping Point solicitation, the Space Agency found a corporate partner—Millennium Space Systems—to share the cost of maturing what TUI now calls its HYDROS thrusters, in exchange for three of the resulting propulsion systems for use on its Altair small satellites. Millenium wanted larger versions of the technology, known as the HYDROS-M, designed for satellites weighing between 110 and 400 pounds, which have already been delivered.

Meanwhile, NASA selected the CubeSat version, the HYDROS-C, to fly on its first Pathfinder Technology Demonstrator (PTD) project, which tries out new CubeSat technology. Agasid manages PTD at Ames, in collaboration with Glenn.

Both HYDROS versions launch with tanks carrying enough water to power them for about three years. Once in orbit, an electrolyzer powered by solar panels splits the water into oxygen and hydrogen gases, stored in separate bladders to be transferred to the combustion chamber as needed. Hoyt describes the system as a hybrid of electric and chemical propulsion—one that’s powered by solar panels but can unleash the powerful thrust of a chemical engine.

The HYDROS approach avoids the risks of sending up a pressurized system, as it’s unpressurized until it starts filling its gas bladders in orbit, says Agasid. The system is also relatively inexpensive and easy to manufacture, scalable for different satellite sizes, and fuel-efficient, he notes.

And it runs on fuel that’s harmless, both in terms of emissions and handling. “You can let undergrads play with it, and they’re not going to poison themselves,” Hoyt says.

HYDROS’ ability to deliver powerful bursts of energy and its long operating life make it ideal for any satellite that needs to move from one orbital altitude to another and then stay there long-term, he says. For example, Earth-observation satellites often fly at low altitudes to maximize imaging resolution. As secondary payloads, this might require them to make their own way to a lower orbit, where drag from the upper atmosphere then requires frequent correction to stay put.

In addition to the three units sold to Millennium, the company sold a couple of engineering models to the Air Force Institute of Technology. And although Hoyt says he doesn’t expect to be flooded with orders until the thrusters have been flight-tested, the company is receiving frequent requests for information.

“Companies that launch satellite constellations like to see NASA investing in technology like this and also doing flight tests so they know it works,” Agasid says.

But TUI has more than the short term in mind. “In the future, we’re going to bank heavily on helping to stand up an entire in-space economy, and we see water as a fundamental resource that’s key to that economy,” Hoyt says. The next generation of HYDROS thrusters will include refueling ports, extending their operational lifetimes indefinitely. And Hoyt looks forward to harvesting water for deep-space travel.

Agasid cautions that NASA is still working to determine whether it’s possible to find, recover, and sufficiently purify water in space. “But assuming you can, this technology would allow you to do deep-space exploration and never worry about running out of propellant.”

Abstract
Thrusters powered by electrolyzed water have been integral to NASA’s plans for deep-space exploration since the 1960s. With funding from SBIR contracts with Ames Research Center and through NASA’s Tipping Point solicitation, Tethers Unlimited Inc. of Bothell, Washington, has built the first practical water-electrolysis engines. Electrolysis separates water into oxygen and hydrogen, which NASA has long used for rocket fuel. It’s safe and easy to store and can likely be foraged from asteroids and other bodies in space. An early application is CubeSat thrusters.

Tethers Unlimited’s HYDROS-C thruster is intended to introduce propulsion capabilities to relatively tiny CubeSats, letting them maintain or change their orbits. It was slated to fly on NASA’s Pathfinder Technology Demonstrator 1 in 2019. 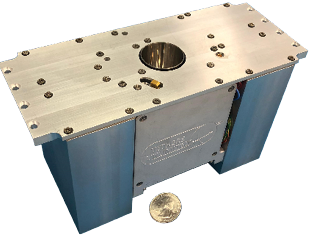 The HYDROS-M thruster is meant for small satellites weighing between 110 and 400 pounds. The tanks on either side hold water, while the central unit holds an electrolyzer and bladders for oxygen and hydrogen gas, along with avionics. The hole in the top is the thruster nozzle.