A Boon for Bone Research

Astronauts operating in a weightless environment for long periods are subject to a form of bone deterioration known as disuse osteoporosis, which can pose a serious hazard for crews on future space missions that might run two years or more. After long exposure to microgravity, weight bearing bones lose calcium and density, become very brittle and are easily fractured.

For two decades, NASA has been engaged in study and experimentation toward developing countermeasures-special nutritional/exercise programs, for example-to microgravity-induced bone deterioration. A particular need of this research was a way of making direct measurements of bone stiffness and mass; while there were available instruments for determining the mineral density of bone, an indirect indicator of bone strength, researchers became increasingly aware of the limitations of such systems in predicting fracture risk.

They turned their attention toward developing a practical, inexpensive, non-invasive way of making strength measurements, a system sensitive enough to monitor and evaluate small changes. The need for such an instrument went way beyond space flight. Since bone deterioration affects a substantial portion of the U.S. population, such an instrument offered broad utility as a research tool for studying bone abnormalities caused by disease, aging and disuse, and as a means of evaluating fracture healing.

Now, for the first time, there exists a commercially available instrument to serve those needs. Called the Mechanical Response Tissue Analyzer (MRTA), it is the result of a three-way collaboration among Ames Research Center; Stanford University, Palo Alto, California; and Gait Scan, Inc., Ridgewood, New Jersey, a small business. Beginning in 1977, NASA Ames and Stanford University teamed on a research program aimed at developing impedance devices capable of measuring the mechanical stiffness of human bones. Bending stiffness is a property of the bone that reflects the materials in the bone and its shape; stiffness can be correlated to bone density and calcium content, thereby providing useful information for research on astronaut disuse osteoporosis and related bone disorders among the general population.

After more than a decade of effort, the team came up with a workable device and conducted clinical testing at Stanford University Orthopedic Hospital. In 1989, Ames and Stanford were joined by Gait Scan, which invested its own funds in refining the technology, developing a practical and affordable instrument, and bringing it to the commercial market.

The resulting MRTA is a portable device that detects the bone's response to a brief vibratory stimulus and produces a measurement of the bending stiffness of the ulna (arm) and the tibia (lower leg), the parts of the human body directly involved in weight lifting and weight bearing activities. A technician places a small probe on the skin surface of the limb to be tested and a five-second electrically-induced vibration is applied. The frequencies from the resonating bone are detected at the same site as the stimulator and analyzed by the system's computer, which produces an accurate reading of the bone's bending stiffness.

"The major attraction of the technology," says Dr. Sara Arnaud of Ames Research Center's Life Sciences Division, "is the speed and simplicity with which the measurement gives a complete picture of bone strength." Among other advantages are its safety-MRTA uses no radiation as do some other methods of examining bone-and its cost, about $20,000, which makes it relatively inexpensive as medical systems go.

The MRTA has a wide range of potential applications. It will be used for the original purpose: astronaut postflight monitoring. Dr. Arnaud is using the device to measure tibia strength among working women at Ames. Gait Scan is pursuing applications in monitoring the effects of exercise and rehabilitation on bone stiffness and in osteoporosis, the underlying cause of some 1,300,000 bone fractures each year that involve treatment costs estimated at close to $4 billion.

An application of particular interest is MRTA's use by the Ochsner Bone Clinic, New Orleans, Louisiana, a facility dedicated to research and treatment of patients with osteoporosis and metabolic bone disorders. In a project headed by clinic co-director Dr. Alan Burshell and Dr. Steven Smith, the MRTA is being used in a study of osteogenesis imperfecta, or O.I., a disease characterized by brittle bones and increased risk of fracture.

The project involves the cooperation of six generations of a large Louisiana family, the Heberts, who have a history of hereditary O.I. More than 50 members of the family have O.I., although others are not afflicted. One single household has sustained more than 80 fractures; an individual in another family has broken more than 50 bones.

The Ochsner team uses the MRTA to measure bone flexibility, then it compares results among family members with O.I. and those without it. MRTA measurements are further compared with data from CT scans, bone density readings by other instruments, and biochemical/genetic information from blood, urine and skin analysis. Dr. Burshell hopes that this mass of information will lead to advanced treatments for O.I., osteoporosis and other bone disorders.

Abstract
NASA studies for astronaut health in long-term space missions led to the development of the Mechanical Response Tissue Analyzer (MRTA), a research tool for astronaut disuse, osteoporosis and related bone disorders among the general population. Ames Research Center and Stanford University generated a workable device and with Gait Scan, Inc., refined and commercialized it. The MRTA is a portable instrument that measures the bending stiffness of bones using electrically-induced vibration and detects and analyzes the frequencies of the resonating bone. Unlike some other methods, the MRTA uses no radiation and is fast, simple and relatively inexpensive. 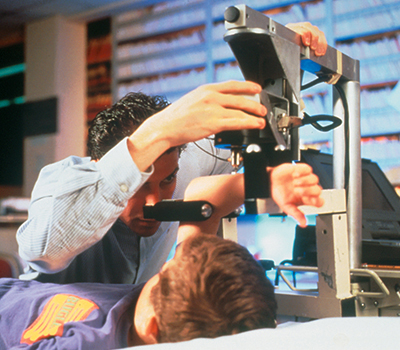 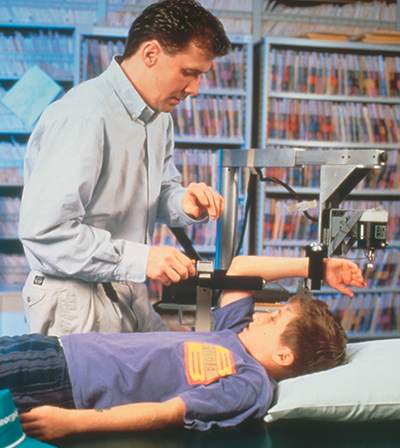 At Louisiana's Ochsner Bone Clinic, a technician is measuring the stiffness of a young patient's ulna in a research project aimed at developing advanced methods of treating bone disorders.