An advanced Trilogy™ cardiac pacemaker that incorporates multiple NASA-developed technologies provides physicians with unprecedented programming capabilities, plus more detailed information on the patient's health and the performance of the pacing system.

In the latter 1970s, Pacesetter brought to the commercial market three significant advances based on the NASA/APL/Pacesetter collaborations: the first rechargeable, long-life pacemaker battery, based on technology for spacecraft electrical power systems; the first single-chip pacemaker, a product of space microminiaturization technology that allowed a substantial reduction in the size of implantable pulse generators; and the first pacing system to utilize bidirectional telemetry, the NASA-developed technology for two-way communication with satellites that provided a way for physicians to communicate with an implanted pacemaker and reprogram it without surgery.

In 1979, Pacesetter introduced the first commercially available bidirectional telemetry pacing system and embarked upon an extensive program of research and development that established the company as a world leader in the very large bradycardia (slow heartbeat) market. Over the years, the company has developed, refined and improved a full line of cardiac pacing products. Pacesetter manufactures all the components of its pacing systems: the pulse generator, or pacemaker, which controls the heartbeat; the pacing leads, which connect the pacemaker to the heart; and the external programmer, which gathers information from the pulse generator that enables assessment of the system's performance and reprogramming.

The new Trilogy family was designed, in consultation with an international board of medical pacing experts, to address concerns that increasingly sophisticated pacemakers were becoming more difficult to program and manage. The Trilogy design features a powerful microprocessor that allows more functions to be fully automatic; this "automatic intelligence," developed by the company's advanced PDx™ diagnostic and programming software, permits a Trilogy unit to adjust many of its settings on the basis of information it gathers about heart function. The net results are enhanced diagnostics and easier programming.

Pacesetter, Inc. is developing a next generation of pacemakers, to be known as Affinity™, in which the number of circuitry components will be halved yet allow incorporation of automaticity, expanded data memory and a sophisticated, handheld PC-based programmer. Originally part of Siemens AG, Pacesetter became-in 1994-a division of St. Jude Medical, St. Paul, Minnesota, a leading manufacturer of medical devices for the cardiovascular market.

Trilogy, PDx and Affinity are trademarks of Pacesetter, Inc.

Abstract
Released in 1995, the Trilogy cardiac pacemaker is the fourth generation of a unit developed in the 1970s by NASA, Johns Hopkins Applied Physics Laboratory and St. Jude Medical's Cardiac Rhythm Management Division (formerly known as Pacesetter Systems, Inc.). The new system incorporates the company's PDx diagnostic and programming software and a powerful microprocessor that allows more functions to be fully automatic and gives more detailed information on the patient's health and the performance of the pacing systems. The pacemaker incorporates bidirectional telemetry used for space communications for noninvasive communication with the implanted pacemaker, smaller implantable pulse generators from space microminiaturization, and longer-life batteries from technology for spacecraft electrical power systems. 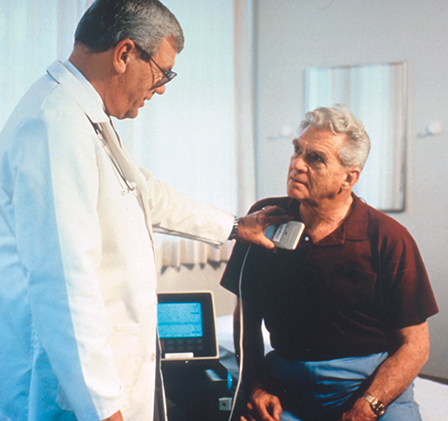