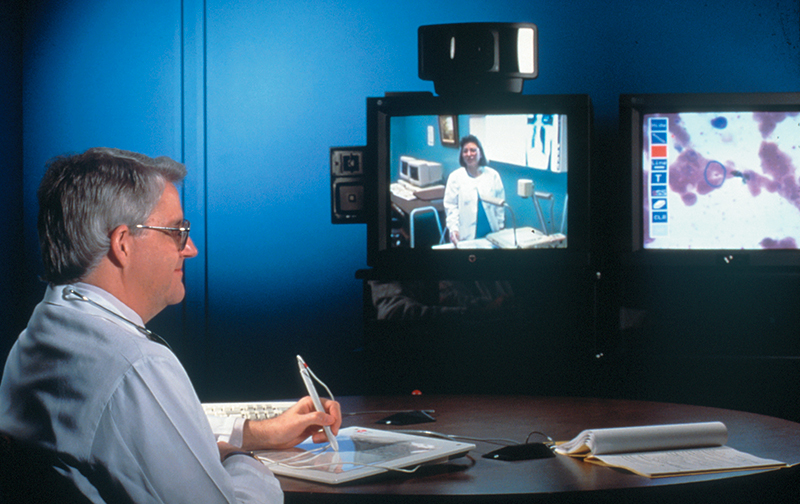 Telemedicine is the interactive transmission of medical images and data to provide better health care for people in remote or "medically underserved" locations. The concept has been around since the 1920s and its general viability has been demonstrated since the 1950s, but wide adoption was slowed by high costs and technological shortcomings.

Today the technique is burgeoning under the impetus of snowballing advances in computer, videoconferencing and digital imaging technologies that offer potentially reduced costs along with greater efficiency in transmission and display.

Since the 1970s, NASA has been in the forefront of research and demonstration in the field of telemedicine. NASA has an obvious interest because of the potential of telemedicine in care of astronauts operating beyond Earth orbit in the future. But the agency has a broader interest because it has been mandated by Congress to promote the transfer to the private sector of technologies developed in the course of aerospace research, and many of the technologies that make telemedicine possible were originally developed for acquiring visual information from lunar and planetary spacecraft. NASA is actively engaged in developing new technologies applicable to both space and Earth telemedicine and in spurring broader acceptance of telemedicine by conducting demonstrations of the technique's potential in cooperation with local governments and the medical and industrial communities.

A demonstration of particular interest is an ongoing program, started in 1995 and planned as a permanent operation, in which the University of Texas Health Sciences Center at San Antonio (UTHSCSA) is linked with South Texas Hospital, Harlingen, Texas, 250 miles distant. The South Texas area is classified as medically underserved, with a special problem in the lack of physicians and nurses trained in oncologic (cancerous) diseases. Until the program started, 80 pediatric oncology patients at South Texas Hospital were able to see UTHSCSA cancer specialists only once a month when the specialists visited Harlingen.

Now, via two-way audio/video linkage, UTHSCSA physicians can see and talk with South Texas patients, review laboratory work and consult with doctors providing primary care at South Texas Hospital. They are also conducting 80 hours a month of "teleclinics" and providing instruction in pediatric oncology nursing techniques and family counseling. In addition, South Texas Hospital is getting specialty help in treating the increasing number of tuberculosis cases in the area.

The South Texas project is the result of a broad public/private sector collaboration. In addition to UTHSCSA, South Texas Hospital and the Texas Department of Health, participants include VTEL Corporation of San Antonio, which donated two desktop videoconferencing systems, maintenance and staff support, and made available two MediaConferencing (MediaConferencing is a trademark of VTEL Corporation) systems at cost; Sprint, Inc., Kansas City, Missouri, which is providing the high speed fiber optic cable link between San Antonio and Harlingen; and Healthcare Open Systems and Trials (HOST) Consortium, Washington, D.C., an industry-based effort to provide rapid application of information technologies to improve health care quality.

NASA contributed expertise to the telemedicine system's design, integration, verification and validation, and additionally provided one-third of the funding to operate the system during its first year. The NASA effort was coordinated by the agency's Office of Space Access and Technology; Dryden Flight Research Center led the effort to integrate off-the-shelf computer and networking systems into the telemedicine link; and Johnson Space Center contributed networking and systems design expertise.

Abstract
Since the 1970s, NASA has been involved in the research and demonstration of telemedicine for its potential in the care of astronauts in flight and Earth-bound applications. A combination of NASA funding, expertise and off-the-shelf computer and networking systems made telemedicine possible for a medically underserved hospital in Texas. Through two-way audio/video relay, the program links pediatric oncology specialists at the University of Texas Health Science Center in San Antonio to South Texas Hospital in Harlingen, providing easier access and better care to children with cancer. Additionally, the hospital is receiving teleclinics on pediatric oncology nursing, family counseling and tuberculosis treatment. VTEL Corporation, Sprint, and the Healthcare Open Systems and Trials Consortium also contributed staff and hardware. 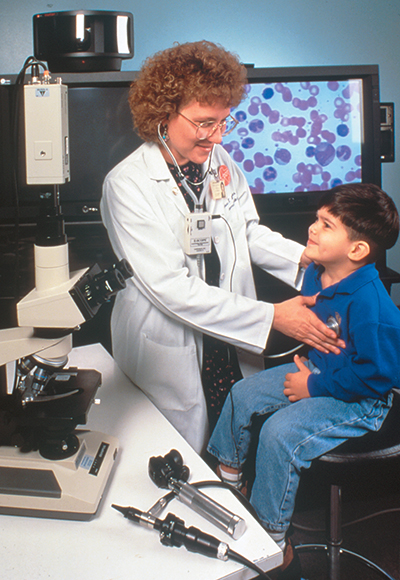 Dr. Terry Lightner transmits the sounds of a child's heart beating to a physician 250 miles away.