It is difficult to imagine a connection between planetary space flight and baby food, but the connection does in fact exist. Commercially available infant formulas now contain a nutritional enrichment ingredient that traces its existence to NASA-sponsored research that explored the potential of algae as a recycling agent for long duration space travel.

The ingredient is an algae-based, vegetable-like oil known as Formulaid®. It was developed and is manufactured by Martek Biosciences Corporation, Columbia, Maryland, which has pioneered the commercial development of products based on microalgae; the company's founders and principal scientists acquired their expertise in this area while working on the NASA program.

Formulaid is Martek's leading product. Its value as a dietary supplement lies in the fact that it contains two essential polyunsaturated fatty acids known as DHA (docosahexaenoic acid) and ARA (arachidonic acid). DHA and ARA, found in human milk but not in most infant formulas, are believed by many researchers to be associated with mental and visual development.

"DHA and ARA are the predominant fatty acids in the grey matter of the brain and DHA is particularly enriched in the retina. Children and adults obtain DHA primarily from their diets, since humans synthesize only small amounts of DHA. Infants acquire DHA and ARA initially in utero during pregnancy, and then from their diets via their mothers' milk. DHA and ARA dietary supplementation may be particularly important for premature and low birth weight infants, who may not get their full allotment in utero."

There are also reasons to believe, Martek says, that DHA-supplemented formula can be beneficial to full term infants as well as pre-terms. Two major nutritional authorities-the British Nutrition Foundation and the United Nations Food and Agriculture Organization/World Health Organization Expert Committee on Human Nutrition-support that belief; both have endorsed use of DHA and ARA as additives in both pre-term and full term infant formulas and as nutrients for women during pregnancy and lactation.

Formulaid and other Martek products had their origins in a NASA program of the early 1980s known as CELSS (Closed Environment Life Support System). Under NASA contract, Martin Marietta Laboratories, Inc., Baltimore, Maryland experimented with the use of microalgae as a food supply, a source of oxygen and a catalyst for waste disposal on future human-crewed planetary missions.

In 1985, Martin Marietta dropped out of the CELSS program when the company decided to discontinue support for bioscience research. Several of the Laboratories' scientists saw an opportunity to start a company and seek to commercialize their expertise in deriving compounds from algae and plants. In May 1985 they left Martin Marietta to form Algatex, Inc., which became Martek Biosciences Corporation in September of that year. Three of the group are still with the company: Dr. Richard J. Radmer, president and chief scientific officer; Dr. David J. Kyle, vice president, head of research and development; and Dr. Paul W. Behrens, director of physiology. Henry Linsert, Jr., is chairman and chief executive officer of Martek.

Martek has devoted more than a decade to research on microalgae, which the company calls "a biochemically rich and diverse kingdom of organisms that have been overlooked by science and commercial interests because of culturing difficulties." Now staffed by some 60 scientists representing all of the life sciences, Martek has solved many of the culturing problems and developed a number of patented products and processes, of which Formulaid is the "flagship" product.

In 1994, Martek was granted a U.S. patent for Formulaid and in the same year the company signed an agreement with Nutricia, a leading European nutritional product manufacturer, whereby Formulaid was to be added to Nutricia's infant formula for sale in Europe. Nutricia successfully introduced the formula for pre-term infants and is in process of expanding Formulaid use to formula for all infants. Martek has also concluded licensing agreements with the Swiss company Sandoz Nutrition Ltd., the Israeli firm Maaborot Products Ltd., and two American infant formula producers, American Home Products and the Mead Johnson Division of Bristol-Myers Squibb. The U.S. licensees are awaiting Food and Drug Administration approval; U.S. introduction of Formulaid for pre-term infant formula is expected in 1996 and for all-infant formula in 1997.

®Formulaid is a registered trademark of Martek Biosciences Corporation.

Abstract
Six scientists from Martin Marietta who did research for NASA on algae as food supply, oxygen source and a recycling agent for long duration space travel founded Martek Biosciences Corporation. Martek's main product is Formulaid for infants, an algae-based, vegetable-like oil containing two essential polyunsaturated fatty acids known as DHA (docosahexaenoic acid) and ARA (arachidonic acid). The acids are found in human milk but not in most infant formulas, and they are believed to be associated with mental and visual development. Formulaid is on the market in two European countries and licensed to the Mead Johnson Division of Bristol-Myers Squibb, American Home Products and others. 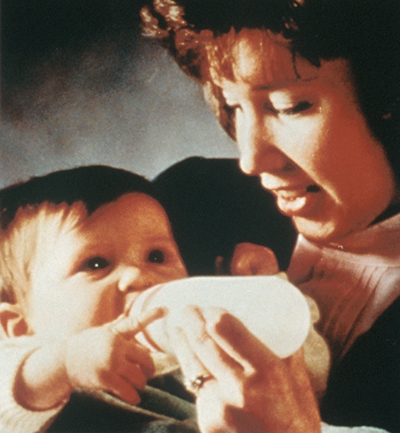 The formula being fed to the baby contains an algae-based additive highly enriched in nutrients believed to be beneficial to infant mental and visual development; called Formulaid, the additive is an offshoot of space research. 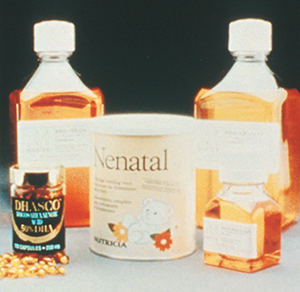 The additive has been introduced in Europe in the formula Nenatal produced by Nutricia of The Netherlands.