The posture that an astronaut's body assumes while floating in the microgravity of space has provided anthropometric data useful in designing chairs for the workplace.

Measurements recorded in orbit by NASA astronauts have shown, in its most unstressed and relaxed state, the human body assumes a trunk-to-thigh angle of 128 degrees. This zero-gravity posture was found to place the musculoskeletal system in its most rested condition. Specifically, this natural posture fosters a non-stressed muscle system, correctly aligned vertebrae, better breathing, improved digestion, and enhanced circulation.

Crew members living aboard NASA's roomy Skylab orbital station in the mid-1970s noted that in space, the human posture differs from the normal posture caused by the tug of one gravity. These findings and others were collected by the Johnson Space Center, then published in a NASA Anthropometric Source Book.

This reference material helped BodyBilt®, Inc. of Navasota, Texas, a subsidiary of ErgoBilt, Inc., to fashion controlled comfort chairs that lessen the harmful effects of gravity on seated workers. A brochure from the company puts the product into perspective: "A pressure-reducing contour that lessens the devastating effects of gravity. From space-age research, a seating system developed to support a natural, stress-free posture."

BodyBilt's ergonomically-correct line of office chairs are targeted for the average worker that sits for prolonged periods, be it in the cleanroom or the boardroom. There has been an alarming increase in back pain and muscle fatigue in workers, along with a dramatic escalation in repetitive stress injuries. In fact, U.S. Department of Labor statistics show that more than 60 percent of all occupational illnesses are now due to repetitive motion disorders, including those resulting from sitting and carrying out intensive tasks. The costs of claims by employees afflicted by these problems is on the rise. Lower back pain, exacerbated by poor seated posture and inadequate weight support, is second only to the common cold as a cause for missed work. Back problems are the number one injury for workers under the age of 45.

Crafted into BodyBilt chairs is a 10-point posture control system and pressure-reducing seat contours. These features, among others, are designed to reduce work injuries while increasing comfort and productivity.

BodyBilt's Task Series is designed for users who require a high degree of lower back support for desktop-intensive tasks. To meet a variety of workplace needs, BodyBilt also offers a Management Series chair for managers and executives. Also, one group of workers--those above-average built employees--are served by BodyBilt's Big & Tall Series chair, which is designed specifically to accommodate users up to 350-lbs. The company also offers a line of medical chairs and a new line of side chairs (guest seating).

The BodyBilt line includes a range of features, such as an adjustable backrest, pivoting seat arms, and tilt tension control. A specialized lumbar support structure can be augmented by the optional Air Lumbar™ Pump, giving each user a custom fit for highly effective lower back support. One-touch controls give the chair user quick access to the natural, stress-free posture that mimics the absence of gravity.

Air Lumbar is a trademark of BodyBilt, Inc.

Abstract
Findings published in the NASA Anthropometric Source Book by Johnson Space Center helped BodyBilt, Inc. to fashion controlled comfort chairs that lessen the harmful effects of gravity on seated workers. Crew members living aboard NASA's Skylab noted that in space the human posture differs from the normal posture caused by the tug of one gravity. There has been an alarming increase in back pain and muscle fatigue in workers, along with a dramatic escalation in repetitive stress injuries. BodyBilt's ergonomically-correct line of office chairs are targeted for the average worker that sits for prolonged periods, be it in the classroom or boardroom. Their roster of national clients lists such organizations as IBM, Microsoft, Texas Instruments, Hewlett-Packard, Eastman-Kodak, Boeing, Motorola, and Walt Disney Studios. 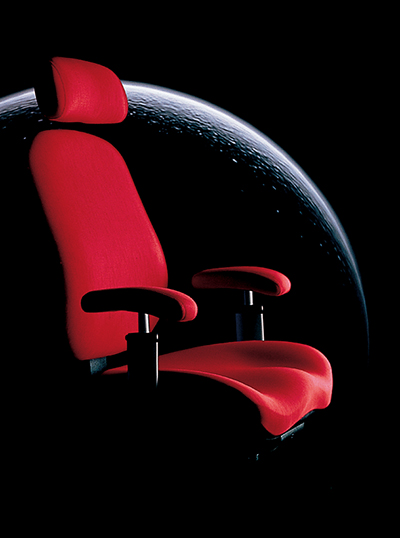 Studies of astronauts floating in microgravity have yielded data useful in the design of chairs that relieve the body of back and leg pain, as well as muscle fatigue in the workplace.