It doesn't take a rocket scientist to appreciate how a vacuum cleaner operates. But a touch of space-age engineering has made a clean sweep of the inner-workings of the house-cleaning appliance, making it far quieter and more efficient.

Under a Space Act Agreement between the Cleveland-based Kirby company and Lewis Research Center, NASA technology was applied to a commercial vacuum cleaner product line.

Of particular importance to the company was a high-tech evaluation of the firm's 1994 home care system, the Kirby G4™, the results of which contributed to the refinement of the new G5™ and future models.

Under the cooperative agreement, Kirby also had access to Lewis' holography equipment. This apparatus is normally used to analyze the vibration modes of jet engine fans. Laser beams of light can detect vibrations that cannot be discerned with the unaided eye. Using the laser, insight was gained into how long a vacuum cleaner's fan would perform.

Lewis proficiency in advanced computer software that can simulate the flow of air through fans was made accessible to Kirby engineers. Computational fluid dynamics—virtually an "electronic wind tunnel"—was employed to figure out what happens when air or any other substance flows through a passage such as a tube or fan.

The Lewis/Kirby collaboration resulted in several successes, such as fan blade redesign. The new blade was constructed from a polymer that was then configured for a substantial reduction in centrifugal force. Vacuum cleaner blades can run as high as 18,000 spins per minute, compared to just 7,000 to 8,000 in a jet engine. Higher spin rates translates into more stress on the blade. The blade redesign was 300 percent to 400 percent stronger than the previous blade used. A 75 percent noise-level reduction in certain frequencies was also accomplished.

Put into motion was a continuing dialogue between Kirby and Lewis engineers on improving air-flow traits in various nozzle designs. The overall goal is to quantify both velocity fields and particle trajectories throughout the vacuum cleaner nozzle. That information, in turn, can optimize nozzle performance in terms of "cleanability" or ability to remove embedded dirt and other particulates from carpeting or hard surfaces. Any future findings would be incorporated into Kirby's G5 and upcoming models.

The relationship forged between Kirby and NASA was striking. The merger of knowledge and need helped an American company become more competitive in the global market by the sharing of world-class knowledge and state -of-the-art equipment.

G4 and G5 are trademarks of Kirby company. 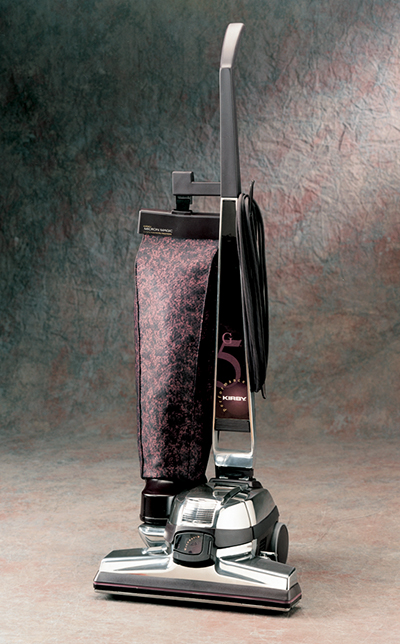 The Kirby G5 incorporates design enhancements, such as a new fan blade, made in cooperation with Lewis Research Center.