Many a Space Shuttle astronaut has been aided in orbit by the extended reach of the six degree of freedom robot arm, termed by NASA as the Remote Manipulator System or RMS.

Control systems for an RMS simulator have been merged with software and high density hardware to run an electrical stimulation medical device. This fusion of aerospace research and biomedical need is the work of Electrologic of America, Inc., based in Dayton, Ohio.

Under a Goddard Space Flight Center contract, ELA was able to refine the process of densely packing circuitry on personal computer boards. ELA was able to provide significant contributions to Goddard adaptive, closed-loop control systems for the Remote Manipulator System Simulator (RMSS). This required design and fabrication of a new computer-controlled servo system for manipulation of the six-axis, 5,000-lb. mechanical arm which simulates the RMS carried on most Space Shuttle missions.

"With several modifications, we were able to use this type of technology to incorporate it into the software used in the StimMaster FES Ergometer," explains Steven Petrofsky, ELA's Executive Vice-President. He has been the recipient of several NASA awards for outstanding hardware design and robotic control developments, and was instrumental in the software development.

Joe Mica, the NASA RMSS systems engineer and manager, said that Petrofsky's efforts were essential to the success of the RMSS. Ned Conklin of Forth Inc., an ELA subcontractor, implemented mission control software; Robert Lea of Ortech Engineering, Yashvant Jani of Hitachi and Mica together developed the RMSS fuzzy logic control design and published it in the CRC Press industry standard reference book The Industrial Electronics Handbook.

The StimMaster is used by persons with paralysis to pedal a recumbent bicycle by stimulating the leg muscles--hamstrings, quadriceps and gluteus maximi--to maintain a consistent rate of 50 revolutions per minute under resistance. Patients steadfastly using the StimMaster Ergometer have experienced diminished secondary symptoms related to paralysis.

"The results of the closed-loop, adaptive control under resistance is the reversal of atrophy, improved circulation and the relaxation of muscle spasms," Petrofsky adds.

The StimMaster incorporates sensors, located within the ergometer, that provide continuous feedback to a computer. This computer controls the rate of pedaling through muscle stimulation, thereby achieving a rhythmical pedaling motion. Because the units are designed for home as well as clinical use, a person suffering from spinal cord injury can carry out a therapy program in the privacy of their own residence.

StimMaster's advanced computer continually monitors the patient's progress every 1/40th of a second and adjusts the settings to meet the patient's needs.

ELA's work for NASA on computer circuitry has also been applied to the VST-100. This portable, electrical stimulation equipment was developed by Petrofsky exclusively for V-Care Health Systems, Inc., based in Washougal, Washington.

The state-of-the-art VST-100 can increase bloodflow to afflicted areas, rejuvenate muscles and improve recovery time of an injured person--all through electrical stimulation. When used by a person distressed by carpal tunnel syndrome, as example, the VST-100 administers electrical pulses that increase circulation in the wrist, which opens up nerve pathways. Using the muscle stimulator technology, a person can return to the job more quickly, work productivity is increased, and health-care costs are decreased.

Abstract
Under a Goddard Space Flight Center contract, Electrologic of America was able to refine the process of densely packing circuitry on personal computer boards, providing significant contributions to the closed-loop systems for the Remote Manipulator System Simulator. The microcircuitry work was then applied to the StimMaster FES Ergometer, an excercise device used to stimulate muscles suffering from paralysis. The electrical stimulation equipment was developed exclusively for V-Care Health Systems, Inc. 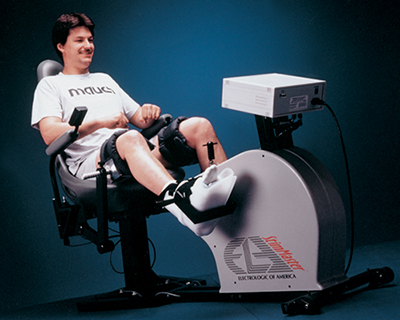 NASA work on microcircuitry to control a robot manipulator arm is incorporated into exercise devices that stimulate muscles suffering from paralysis. 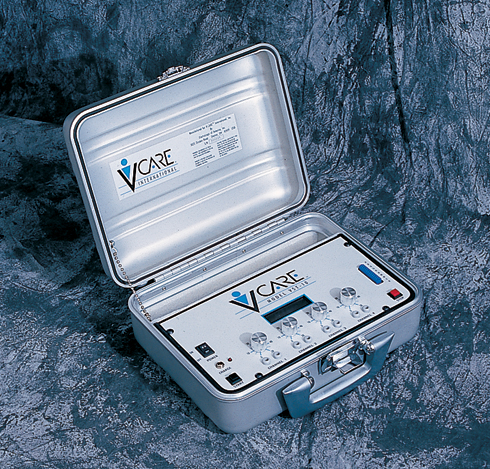