A sensitive infrared camera that observes the blazing plumes from Space Shuttle or expendable rocket liftoffs is capable of scanning for fires, monitoring the environment and providing medical imaging.

QWIPs are the brainchild of the Jet Propulsion Laboratory's (JPL) Center for Space Microelectronics Technology in partnership with Amber, a Raytheon company in Goleta, California.

A quantum well can be visualized as a small well with electrons in it at a state of rest. When these electrons are displaced by a photon—the smallest energy unit in a beam of light—electrons burst out. The current produced by the electrons is relative to the amount of infrared photon energy which struck them. By measuring that current, the photodetector can tell how much infrared light comes from various sources at the scene being imaged.

QWIP's set of infrared eyes are sensitive to heat energy in the eight to twelve-micrometer wavelength range. This is 20 times longer in wavelength (lower in energy) than visible light. That allows the camera to see radiation at wavelengths not normally visible to the human eye. Room temperature objects, observed at these wavelengths, can be seen to radiate the same way red-hot objects glow in visible light.

As a portable infrared camera, the 10-pound camera offers unrivaled sensitivity in recording objects that give off wavelengths in an outermost part of the infrared spectrum.

For infrared light detectors to function they must be maintained at cold temperatures. QWIP comes replete with a Stirling cooler, a closed-cycle refrigerator about the size of a fist. Despite its modest proportions, this motor cycles cooling gas millions of times. That processing drops the camera's temperature from room temperature to minus 343 degrees Fahrenheit—in all of 10 minutes.

The eye of the camera is a two-dimensional array of detector pixels, with each pixel converting some of the infrared photons to an electric signal. That array consists of 65,536 QWIPs to make up a focal plane of 256 by 256 pixel. Each QWIP is a pixel. Size wise, the entire camera measures 4.4 inches wide, 10.3 inches deep and 7.2 inches long. It can be plugged into a video cassette recorder.

Due to the camera's industry/government genesis and its extraordinary capabilities, QWIPs are ideal for a variety of ground and space-based applications. Night vision, early warning systems, navigation, flight control systems, weather monitoring, security and surveillance are among the duties for which the camera is suited. Its sensitivity to the distribution of different gases also adds to QWIP's role as an environmental watchdog to measure pollution and relative humidity profiles in the atmosphere. It works effectively in both daylight and nighttime conditions.

Medical applications are also expected. One QWIP camera underwent testing by surgeons at the Texas Heart Institute to see which arteries are carrying blood during heart surgery.

In late October 1996, the QWIP camera debuted as a fire-observing device. The camera hopped a news helicopter flight, courtesy of KCAL-TV, Channel 9 in Los Angeles, California. A spate of destructive fires were speeding through Malibu. JPL's Mani Sudaram, a member of the QWIP development team, used the camera to transmit live images from the helicopter. High-flying QWIPs were quick to point out hot spots in areas that appeared innocuous to the naked eye. These sites, easily discounted as hazardous on first view, are of concern for firefighters as they can flare up even after the fire appears to have subsided.

Abstract
A sensitive infrared camera that observes the blazing plumes from the Space Shuttle or expendable rocket liftoffs is capable of scanning for fires, monitoring the environment and providing medical imaging. The hand-held camera uses highly sensitive arrays in infrared photodetectors known as quantum well infrared photo detectors (QWIPS). QWIPS were developed by the Jet Propulsion Laboratory's Center for Space Microelectronics Technology in partnership with Amber, a Raytheon company. In October 1996, QWIP detectors pointed out hot spots of the destructive fires speeding through Malibu, California. Night vision, early warning systems, navigation, flight control systems, weather monitoring, security and surveillance are among the duties for which the camera is suited. Medical applications are also expected. 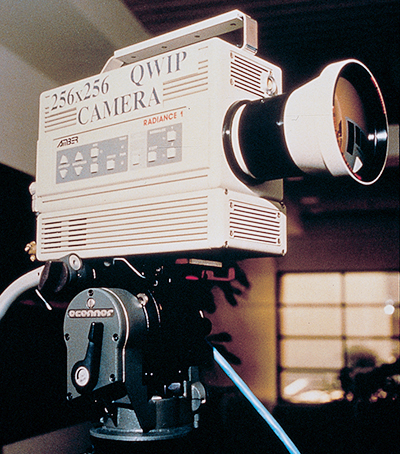 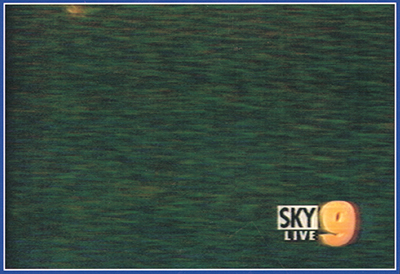 Using a visible CCD camera, the Malibu fires are not detectable. 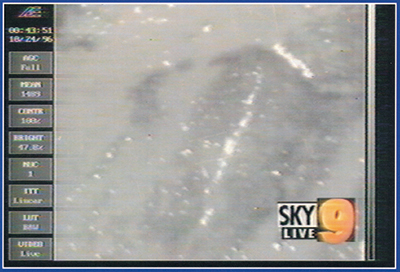 With the QWIP camera, users could see through smoke and pinpoint hotspots at the Malibu fires in October 1996.