Orbital Research has applied ORICA technology to the problem of controlling aircraft wing flutter, movement that is akin to a shimmy in an automobile. The effectiveness of the control software has been validated during wind tunnel testing at Langley. In related work, Orbital Research and NASA's Lewis Research Center have determined that the company's controller could be coupled with Lewis' high speed valve technology to improve aircraft performance.

There are three main components to ORICA. At its heart is an Identifier Module which estimates a mathematical model of the system that is being controlled. The model, which is re-identified at every time step, relates the effect of each actuator input to the output of the system. The mathematical model estimated by the Identifier Module is then used by the Predictor Module to predict the future condition of the system to be controlled. Finally, the Controller Module uses the estimated future response of the system developed by the Predictor to calculate the actuator's optimal position to meet the desired response.

To a pilot, large changes in control before action takes place, could mean the difference between life and death. The ORICA controller doesn't wait to take action. Rather, the intelligent software program anticipates and makes adjustments beforehand. As shown in Langley wind tunnel testing, the ORICA can control a small flap on a wing, nullifying flutter by regulating the flap's angle as many as 500 times per second.

Because of its computational efficiency, the superior performance of ORICA was achieved by employing a personal computer platform (Intel® Pentium®) as opposed to more expensive hardware commonly tasked for these high speed flutter suppression tests. ORICA's special algorithms require only one percent of the computations of other more expensive and complex academic controllers.

One of ORICA's first applications was in suppression of flutter of a wing subjected to speeds up to Mach 0.95 at Langley's Transonic Dynamics Tunnel. ORICA successfully reduced vibrations on the wing by an order of magnitude over a standard fixed gain controller.

The commercially available ORICA software is not strictly for use on aircraft. Future application areas for ORICA include control of robots, power trains, systems with arrays of sensors, or regulating chemical plants or electrical power plant control.

Intel and Pentium are registered trademarks of Intel Corporation. 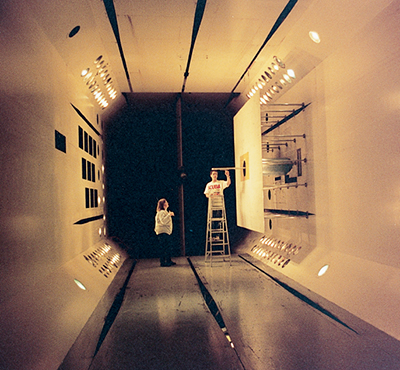 Wind tunnel testing of ORICA intelligent control software has shown it to be highly responsive in damping out wing flutter. Application to commercial aircraft could result in safer and more cost-effective jet travel.