The parts count for a Space Shuttle is a whopping number in the millions. Take for instance a Shuttle orbiter's protective veneer of heat shield tiles. Each of the thousands of tiles is catalogued as to size, type of tile, and location on the vehicle. To identify, track, and record keep these tiles, digital data matrix technologies were developed at the Marshall Space Flight Center.

Today, individual heat shield tiles on the fleet of orbiters are marked with a high data density, two-dimensional, machine-readable symbol. This NASA-developed technology helped to launch a new commercial endeavor in product coding.

Through a NASA Space Act agreement, CiMatrix Corp. of Canton, Massachusetts has been able to commercialize the product coding idea by establishing the Symbology Research Center (SRC) of Huntsville, Alabama. Opening its doors for business in August 1997, SRC is commercially marketing a new method of identifying products with invisible and virtually indestructible markings. These laser-etched markings are termed "compressed symbologies."

No longer does a company have to face missing paper labels--labels that can fall off a high-value part or product due to heat, cold, rain, wind, and other inhospitable conditions.

The permanent digital data matrix codes work on practically any surface, be it steel or metal, even plastics, glass, paper, fabric, ceramics, or other material. Compressed symbologies can withstand extreme fluctuations of temperatures, up to 2,200 degrees Fahrenheit and an air flow exceeding 18,000 miles per hour. That is the heat load and speed associated with a Shuttle orbiter during a space mission.

The coding technology provides up to 100 times as much information as linear bar coding symbology in the same or less space. Markings can range in size from a mere four microns (read microscopically) to as large as two square feet (read telescopically). Commercial uses for the new labeling technology abound. According to Donald Roxby, SRC's Director, the marking system is attracting a varied clientele with a range of commercial interests. "Everything from electronic parts to pharmaceuticals to livestock," Roxby reports. He sees a growing need for an identification system that can be placed directly on a product, regardless of that product's shape, size, color, and other features.

Additional commercial markets for the marking technology have been targeted. These include counterfeit fasteners that can be discovered and removed without replacing every fastener on the product. Engine parts can be accurately tracked during the product's entire lifetime. Delicate and expensive items can be easily and more accurately inventoried and guarded against theft.

The growing list of customers for laser-etched symbol coding already includes major companies in the automotive business, such as General Motors, TRW, and Borg Warner. In the electrical and semiconductor business sector, Hewlett Packard, Intel, and Motorola are customers. Pharmaceutical suppliers Johnson & Johnson, Eli Lilly, and Parke Davis also use symbol coding on their products.

Quick solutions for overcoming marking problems are available from the Symbology Research Center. Considered the most advanced 2-D symbology research and development laboratory in the world, SRC maintains the country's most comprehensive materials marking database. The center has an ongoing Space Act Agreement with NASA to further advance this 2-D technology. Any governmental or commercial entity can request assistance on a specific product identification problem by submitting a problem statement through the Marshall Space Flight Center Technology Utilization Office or directly through the SRC.

Abstract
Under a NASA Space Act Agreement with Marshall Space Flight Center, Symbology Research Center commercialized a new method of identifying products with invisible and virtually indestructible markings. This digital data matrix technology was developed at Marshall Space Flight Center to identify the millions of parts that comprise space shuttles. The laser-etched markings are seen as the next generation of product bar codes."" 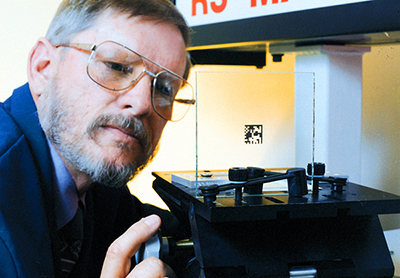 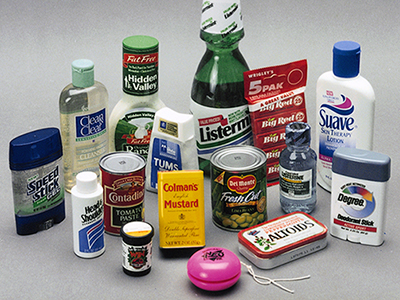