Joy of a Joystick

Computer games can now be played with all the precision and sensitivity needed for a safe and soft Space Shuttle touchdown. And for good reason. A game controlling joystick for personal computer-based entertainment has been designed after the flight controllers used onboard NASA's piloted spacecraft.

ThrustMaster, Inc. of Hillsboro, Oregon introduced in 1997 an unusual type of joystick. Its design mirrors the action of the Rotational Hand Controller (RHC) built for the Johnson Space Center and Lockheed Martin by ThrustMaster. Crafted for use in Space Shuttle training simulations, the RHC is utilized by astronauts on the ground to practice runway touchdowns, as well as in orbit to sharpen maneuvering and landing techniques.

ThrustMaster produces highly realistic and innovative game controllers. The company has evolved a broad product line that includes action, adventure, sports and arcade peripherals. For some products, ThrustMaster controls have been designed after real military aircraft, giving the company an edge in several fully-functional products for computer-based flight simulators now on the market. Another market segment was met by the company with the development of auto racing controllers for driving and racing simulations.

Providing computer game enthusiasts with action on the ground and in the air, it would only seem natural that ThrustMaster would take its customers to new heights--the final frontier of space.

Lockheed Martin contracted ThrustMaster in 1996 for ten Space Shuttle control sticks and twenty electrical interface circuit boards to be used by Johnson Space Center. A specially engineered controller gleaned from the firm's Space Shuttle work is now available, featuring many new product firsts, not only for ThrustMaster, but for the gaming industry as well. The system literally brings technology from NASA's Space Shuttle program into a game player's hands. "We are creating attractive, high-quality, affordable products positioned to appeal to a more diverse user base," explains ThrustMaster CEO, Stephen Aanderud.

As a derivative of the controller built for the NASA Shuttle program, the product hosts classic features. It is touted as the next generation 3-D action game controller. Microprocessor-controlled optical sensors permit the controller's user to customize program joystick axes and buttons. The unit features four programmable axes, six programmable buttons and is completely digital. Digital technology makes the controller easy to install. Being 100 percent digital, the controller sports added advantages--smooth movement and faster response time.

The controller's most unique feature is the movement of the hand grip itself. The grip pitches forward and back from the central point of the joystick handle, allowing users to make the most of their natural hand movements for optimal game play. Along with pitch and roll control, a third axis of the joystick gives an individual the ability to yaw, emulating aircraft rudder pedals. In addition, the interactive controller features a four-way hat switch, five programmable buttons, a trigger, and a slide throttle control.

Whether there is need for immediate shields up, avoiding an errant asteroid or two, or split second shifts to light speed, this versatile action controller is sure to give any computer game aficionado a real hands-on feel for the space program.

Abstract
With Lockheed Martin Aeronautical Systems as the prime contractor, ThrustMaster, Inc., developed shuttle controls for NASA's Shuttle simulators. ThrustMaster developed an authentic and operational reproduction of the Rotational Hand Controller used to control the space shuttle. It will also be used by shuttle astronauts during ground training. It will additionally be used as onboard simulators to practice shuttle landings while still in orbit. Their newest product, the Millennium 3D Inceptor, is a digital 3D joystick, based on the controller built for the NASA shuttle program. 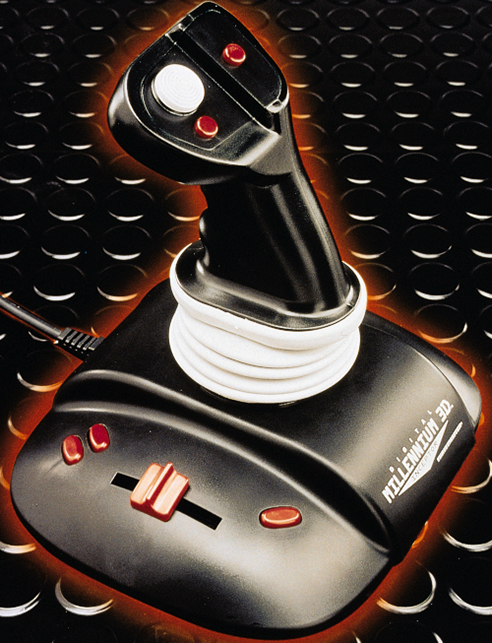 A ThrustMaster, Inc. computer game joystick is derived from the firm's work on a Space Shuttle hand controller.