Space medical specialists have long been intrigued by how and why microgravity affects the immune system. Preliminary evidence from Space Shuttle flights suggests that immunity is depressed. To help decipher this medical mystery, NASA sought hardware development of a machine that could separate and examine cells rapidly. Space engineers quickly ran into a snag. The device to do the work, a flow cytometer, was far too big and cumbersome--about the size of a pool table--to loft into orbit on a space station.

NASA, with the Kennedy Space Center as the lead center, and the American Cancer Society (ACS) teamed in 1989 to develop a far more compact flow cytometer.

A Memorandum of Understanding was signed, establishing a means by which space technology could be formally transferred to the medical profession. The NASA Technology Applications team at the Research Triangle Institute supported this partnership in the first systematic approach to matching a list of medical needs with space technology.

NASA researchers were delighted with the joint research endeavor to develop an advanced flow cytometry instrument. This kind of device could support biomedical experiments aboard the space station while advancing medical knowledge in cancer detection and treatment here on Earth.

Flow cytometry, the initial project undertaken by the partnership, is a process in which cells in suspension flow through a sensing region where light signals--indicating important biologic properties--are generated and evaluated by photodetectors. The cancer-fighting benefits of flow cytometry include the ability to evaluate cancer cells very early and to determine several important features, including the sensitivity of those cells to different chemotherapy drugs, the ability of the cells to grow, and their capacity for spread. Better and more timely strategies in the fight against cancer was a main objective of the research.

The challenges in developing multichannel flow cytometry were addressed in a NASA/ACS workshop. Technical improvements needed were improved signal processing for multichannel analysis of optical emission spectra; reductions in complexity, size, power requirements; and numbers of optical sensors, simplification of sample preparation, and expert system software. The University of Miami was instrumental in defining requirements and early testing of prototypes.

One outcome of the long-standing cooperation between NASA and the ACS led to a new tool—a high-resolution flow instrument designed specifically for DNA analysis of solid human tumors.

RATCOM, Inc., of Miami, Florida, started offering the DNAnalyzer®, the first commercial instrument stemming from the NASA/ACS partnership, the Space Station In-Flight Cytometry Project. RATCOM pioneered a new triangular flow cell technology. This work bestows the DNAnalyzer with twice the resolution and three times more uniformity on a day-to-day basis than results on the same samples from older flow cytometer technology. Testing of the new instrument in 1997 fully confirmed the advancement in flow channel design.

"There has been a major improvement in resolution and reproducibility," says Richard A. Thomas, President of RATCOM. "This translates into a better understanding of the nature of the patient's tumor, and therefore better treatment. The improvement is not marginal. The instrument allowed positive confirmation of tumors, which were only suspicious by the older technology in twenty percent of the cases in the 170-patient study," he says.

Advanced flow cytometry has the potential to become a significant tool in fighting cancer. Other potential uses involve the clearing of cancer cells from bone marrow prior to retransplantation of the patient's own bone marrow after chemotherapy. Patients who have leukemia or AIDS may also be followed by means of flow cytometry to determine the effectiveness of treatment.

Thomas gives credit to the cooperative project with NASA, enabling him to commercialize a flow cytometer for cancer diagnosis.

Abstract
Ratcom, Inc., has joined NASA Johnson Space Center in an active program to develop cytometry capabilities for space station freedom. This agreement results from a cooperative program that NASA entered into with the American Cancer Society to aid in cancer prevention, diagnosis, and treatment. The flow cytometer is used by cancer researchers to make cellular measurements. 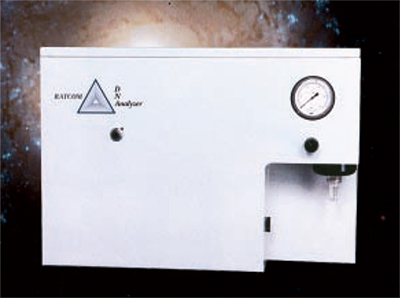 NASA cytometer project for the Space Station spurred the development of this instrument—important for cancer diagnosis—that can properly classify tumors.