Three-dimensional (3-D) simulation software for virtual reality applications has found new utility in the airline industry. Thanks to the efforts of Steve Lakowske, founder of SimAuthor Inc. of Boulder, Colorado, a flight data visualization system called FlightViz™ has been created for NASA's Aviation Performance Measuring System (APMS), resulting in a comprehensive flight visualization and analysis system. The visualization software is now capable of very high-fidelity reproduction of the complete dynamic flight environment, including airport/airspace, aircraft, and cockpit instrumentation.

Lakowske is a ten-year NASA veteran, formerly employed at the Ames Research Center. He attributes much of his success to the years of NASA work in computational human performance modeling. His NASA experience in simulation technology began at Ames in 1979, working as an electronics engineer in the Electro-Systems Engineering Branch.

Flight data are routinely analyzed by many non-U.S. carriers to measure the safety, training, and efficiency of their fleet operations. There are many ways of using digital flight data for these purposes. One of the specific goals of the APMS research project cites the need for enhancing and facilitating animated playback of data from individual flights to assist data analysts, and to provide effective feedback for training and self-assessment of air crews.

The innovation prompted by the APMS work centered on the fact that current, commercial-off-the-shelf technology to animate flight data was designed for accident investigations, not for crew feedback. The fidelity of this animation, therefore, was not satisfactory for the objectives of APMS.

Lakowske is quick to point out that multimedia tools and techniques are often used today to address a wide variety of training and corporate communications needs. But even these high-tech software tools can be enhanced, he says. Two additional enabling technologies can extend the virtues of multimedia approaches: High-fidelity, fully-articulated, interactive, 3-D real-time computer-generated graphics; and high fidelity, real-time physical device simulation modeling.

Pilots, instructors, human factors researchers, incident investigators, maintenance personnel, flight operations quality assurance staff, and others can utilize the software product to replay flight data from a flight data recorder or other data sources, such as a training simulator. The software can be customized to precisely represent an aircraft of interest. Even weather, time of day, and special effects can be simulated.

Among the key benefits of the software product is its ease of use. Drawing from simulator databases of airports and public domain cockpit instrumentation, the software lessens user training time due to intuitive graphical user interfaces. 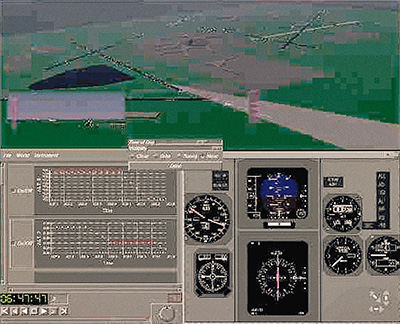