The requirement for low-cost, compact imaging systems used in spacecraft has made cameras the size of a computer microchip possible. Applications of this state-of-the-art technology include personal computer video conferencing, digital still cameras, medical instruments, toys, and various automotive applications.

CMOS-APS technology enables the integration of a complete imaging system, including pixel array and control area, onto a single piece of silicon. One benefit is that it greatly reduces power consumption and lowers the number of parts needed in finished imaging products. Furthermore, by combining all camera functions—from the capture of photons to the output of digital bits—CMOS sensors offer enhanced reliability, facilitate miniaturization, and allow on-chip programming of frame size, exposure, and other parameters. Unlike conventional charge-coupled device (CCD) technology, CMOS sensors use the same manufacturing platform as most microprocessors and memory chips. Therefore, the CMOS devices are more cost-effective and easier to produce in comparison to CCDs.

Photobit, an entrepreneurial spinoff firm established in 1995 and based upon the JPL work, obtained the licensing rights to the CMOS-APS technology with the goal of furthering and marketing the revolutionary solid state image sensor. In early 1999, Photobit announced the issuance of a broad U.S. patent for camera-on-a-chip technology. The company's priority now is demonstrating the superior nature of the CMOS technology over CCD technology introduced in the 1970s. High-performance digital sensors that use CMOS architecture have been created at Photobit, "to set new performance standards for videoconferencing, digital still cameras, broadcast television, medical, agricultural, and children's applications," says Photobit's CEO and founder Sabrina Kemeny.

Two new products in Photobit's line of off-the-shelf videoconferencing chips were unveiled in 1999. The new sensors produce color or monochrome full-frame 8-bit digital video at 30 frames per second. They feature electronic pan, tilt, and zoom, auto-exposure (with manual override), and full programmability via a serial interface. Besides videoconferencing, the devices will be used in video cell phones and other small-format applications.

Photobit offers a unique choice of off-the-shelf and custom products. Officials at Photobit are confident about the commercial use of the technology, as image capture markets are expected to expand exponentially in the next few years. Photobit is aiming this technology at new markets where small size and low power consumption are needed, such as digital cameras, PC video conferencing, camcorders, and portable PC video phones. Other areas being pursued by the company include the automotive industry, where Photobit devices can provide night vision enhancement. For instance, image sensor technology would be used in rear view mirrors that dim in proportion to the amount of headlight glare from trailing vehicle headlights.

In the medical market, CMOS-APS technology can be tapped for x-ray products, including bone mineral density measurements. This allows a physician to track the onset of osteoporosis with less than one-hundredth the dosage of a dental x-ray to the patient.

Abstract
The Jet Propulsion Laboratory's research on a second generation, solid-state image sensor technology has resulted in the Complementary Metal-Oxide Semiconductor Active Pixel Sensor (CMOS), establishing an alternative to the Charged Coupled Device (CCD). Photobit Corporation, the leading supplier of CMOS image sensors, has commercialized two products of their own based on this technology: the PB-100 and PB-300. These devices are cameras on a chip, combining all camera functions. CMOS active-pixel" digital image sensors offer several advantages over CCDs a technology used in video and still-camera applications for 30 years. The CMOS sensors draw less energy they use the same manufacturing platform as most microprocessors and memory chips and they allow on-chip programming of frame size exposure and other parameters." 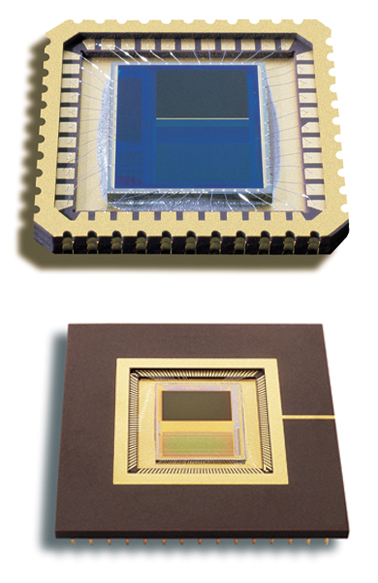 Photobit Corporation's camera-on-a-chip is the result of a license granted to use NASA's CMOS-APS technology.