Recent statistics published by the American Cancer Society show that approximately one in nine women in the United States will develop breast cancer. Now, early detection has a new weapon. An advanced method for screening breast cancer using technology developed at NASA's Jet Propulsion Laboratory (JPL) is expected to be widely available in U.S. medical facilities and in selected foreign markets by the end of the year. In December of last year, OmniCorder Technologies, Inc., of Stony Brook, New York, received 510K clearance from the Food and Drug Administration (FDA) to market the company's innovative BioScan System.™

The BioScan System has been used to locate and confirm the presence of a cancerous breast lesion by detecting the cancer's ability to recruit a new blood supply--one of the hallmarks of a malignant lesion. Studies have determined that cancer cells exude nitric oxide. This causes changes in blood flow and temperature in tissue surrounding cancer, which can then be detected by the extremely heat-sensitive BioScan System sensor.

OmniCorder owns the exclusive, worldwide licenses to use the quantum well infrared photodetector (QWIP) sensor for biological applications, including disease detection. The digital sensor detects the infrared energy emitted from the body and, therefore, "sees" the minute differences associated with the local increase in blood flow changes. In addition to the BioScan System, the QWIP sensor, originally designed for planetary exploration and terrestrial surveillance, has also been useful in locating hot spots during fires and while observing volcanoes. The camera can see radiation at wavelengths invisible to the human eye.

As a cancer-detection device, the detector is sensitive to temperature differences of less than .01 degrees Celsius and detects the slightest rise in temperature in tissue surrounding cancer cells. Just like having your picture taken with a video camera, it causes no discomfort to the patient and uses no ionizing radiation.

"Since we announced the BioScan System's clearance by the FDA, we have been inundated with requests to install and test the unit in clinics and hospitals across the country and overseas for a variety of cancer, as well as other disease applications," says OmniCorder's president and CEO, Mark Fauci.

At the moment, not only is the BioScan System being used to detect cancerous legions, but it is also being tested as a monitoring device during cancer treatment. The Dana-Farber Cancer Institute in Boston, Massachusetts, is testing several new classes of anti-cancer products that are designed specifically to inhibit the growth of cancer by greatly reducing the blood supply to it. Dana-Farber doctors are using the BioScan System to detect important treatment-induced changes in an array of cancerous lesions of the breast and skin, among others.

Unlike mammography, which detects calcification associated with cancer cells after they are well into development, the BioScan System detects blood flow differences associated with cancerous cells. Blood flow differences are known to occur in the earliest stages of cancer development. The goal of this technology is to reduce the amount of time it takes to detect a lesion, allowing for much earlier treatment intervention and, therefore, better the survival rates.

BioScan System™ is a trademark of OmniCorder Technologies, Inc.

Abstract
The BioScan System was developed by OmniCorder Technologies, Inc. at the Jet Propulsion Laboratory. The system is able to locate cancerous lesions by detecting the cancer's ability to recruit a new blood supply. A digital sensor detects infrared energy emitted from the body and identifies the minute differences accompanying the blood flow changes associated with cancerous cells. It also has potential use as a monitoring device during cancer treatment. This technology will reduce the time taken to detect cancerous cells and allow for earlier intervention, therefore increasing the overall survival rates of breast cancer patients. 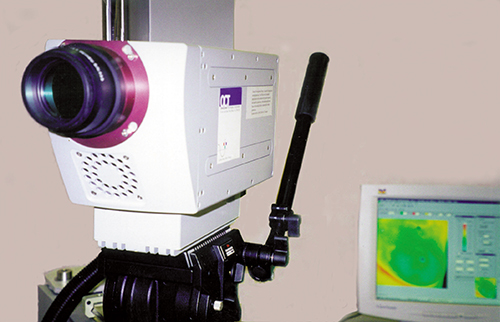