NASA's scientific research, which benefits people everywhere, would not get very far without the rocket fuel that powers the Space Shuttle flights. A Utah company is now taking that rocket fuel and using it to benefit millions around the world in a whole new way. Thiokol Propulsion is using NASA's surplus rocketfuel to produce a new flare that destroys land mines safely and easily.

Through a Memorandum of Agreement between Thiokol and NASA's Marshall Space Flight Center, Thiokol is allowed to make use of scrap Reusable Solid Rocket Motor (RSRM) propellant. Such an arrangement benefits both parties, as NASA is able to reduce propellant waste without negatively impacting the environment, and Thiokol is able to access the materials needed to develop the flare at a low cost. The result is a Demining Device, developed by Thiokol in collaboration with DE Technologies, Inc., which neutralizes land mines in the field without setting off their explosive materials.

NASA always makes sure they have a small excess of propellant than they will actually use for each Shuttle mission to provide a margin of error in case extra fuel is required. Rocket fuel must be used quickly once it is mixed or it begins to solidify. Once it solidifies, it cannot be used for another launch. However, in its solid form, the rocket fuel is the perfect ingredient for the Demining Device.

It is estimated that between 60 and 120 million active land mines are scattered around the world in approximately 70 countries. Every year, 26,000 people, usually women and children, are killed or maimed by a land mine. Two techniques commonly used to disarm mines are a direct, attended operation or a remote operation using high explosives. The direct approach poses considerable risk to the military or humanitarian agency personnel who serve on the detonation teams, as well as to civilians. Remote detonation, which creates a high order detonation of the mine by detonating an explosive charge, can produce shrapnel, which may damage buildings or increase minefield contamination.

Thiokol's approach provides a more affordable and safer method of defusing land mines. The technique involves placing a Thiokol-produced flare next to the uncovered land mine. The flare is then ignited using a battery-triggered electric match. Using the solidified rocket fuel as an incendiary, the flare burns a hole in the land mine's case and ignites the explosive contents. With the explosive material burned away, the mine is disarmed and no longer poses a threat.

Occasionally, the mine will detonate before the explosive material has been burned away. According to Thiokol's project manager, Charles Zisette, even when this occurs, the resulting explosion is more controlled and minimized than other disarmament techniques.

So far, Thiokol has sold over 700 units for use in the field in Kosovo and Jordan. Thanks to NASA's rocket science, hundreds of thousands of innocent lives will be saved or protected from permanent disabilities.

Abstract
Thiokol Propulsion uses NASA's surplus rocket fuel to produce a flare that can safely destroy land mines. Through a Memorandum of Agreement between Thiokol and Marshall Space Flight Center, Thiokol uses the scrap Reusable Solid Rocket Motor (RSRM) propellant. The resulting Demining Device was developed by Thiokol with the help of DE Technologies. The Demining Device neutralizes land mines in the field without setting them off. The Demining Device flare is paced next to an uncovered land mine. Using a battery-triggered electric match, the flare is then ignited. Using the excess and now solidified rocket fuel, the flare burns a hole in the mine's case and ignites the explosive contents. Once the explosive material is burned away, the mine is disarmed and no longer dangerous. 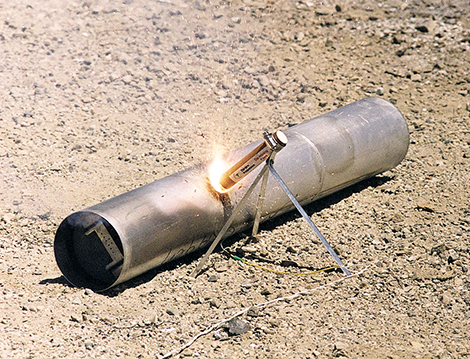 Thiokol Propulsion's demining flare burns through the outer casing to neutralize the explosive agents inside.