An innovation from Moller International, of Davis, California, will make engines cleaner and more efficient. Through Small Business Innovation Research (SBIR) funding from NASA's Glenn Research Center, the company created a new coating for rotary engines used for industrial applications, watercraft, and other performance-demanding machines. These coatings significantly improve the fuel consumption of a vehicle while reducing emissions. The new coatings are offered in the new Rotapower® engine, which is produced and distributed by Moller subsidiary, Freedom Motors, Inc. It is this innovative coating that allows the Rotapower engine to function smoother than other models, reducing wear and protecting the engine.

The PS200 plasma-applied engine coating was developed at Glenn Research Center. The engine uses a unique piston-free design that incorporates this advanced rotor coating, which is applied to the housings of the engine and serves to reduce cooling requirements and improve thermal efficiency.

The Rotapower engine has the ability to operate on a variety of fuels, including gasoline, natural gas, diesel, alcohol, and kerosene. Typically, most engines are piston-driven and operate on unleaded gasoline, but the new engine can be easily adapted to run successfully on certain alternative fuels with only minor adjustments.

Also unique to the Rotapower engine is its low number of two moving parts, which are on roller bearings and move in one circular direction. This elegant simplicity reduces vibration and supports engine efficiency. The optional module has only one moving part so that horsepower can be added without increasing the complexity associated with typical modification kits. Another unique feature of the engine is its charge cooling capability, which reduces the need for cooling components such as pumps, regulators, radiators, and more. These original and effective elements ensure smooth engine operation, leading to a long engine life span.

The clean running Rotapower engine is environmentally appealing, because it eliminates over 98 percent of the total emissions given off by traditional piston engines. Fewer pollutants are spewed into the air, making it especially attractive in areas where air pollution is a major problem. Due to the clean-burning nature of the engine, it meets the stringent standards set by the California Air Resources Board.

The engine also has numerous commercial benefits in several types of recreational, industrial, and transportation applications, including personal watercraft, snowmobiles, portable generators, and pumps. Through the efforts of Moller International and Glenn Research Center, the Rotapower engine will continue to change the face of engine-powered products--making them cleaner, cheaper, and more efficient.

Rotapower® is a registered trademark of Freedom Motors, Inc. 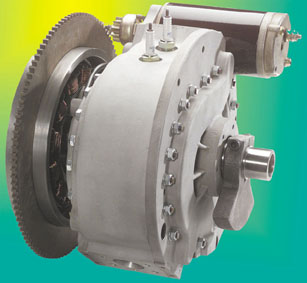 Incorporating NASA technology into the Rotapower® engine gives it the ability to run cleanly and efficiently on a variety of fuels.