An estimated one million people worldwide have heart conditions that would benefit from a heart transplant. However, the number of donor hearts available is extremely limited, with less than 3,000 total transplants performed each year in the United States. Fortunately, for people with such heart problems, a unique collaboration between NASA, Dr. Michael DeBakey, Dr. George Noon, and MicroMed Technology, Inc., has resulted in a lifesaving heart pump for patients awaiting transplants. The MicroMed DeBakey VAD® is a ventricular assist device that functions as a "bridge to heart transplant" by pumping blood throughout the body to keep critically ill patients alive until a donor heart is available.

The concept for the tiny pump grew from conversations between Dave Saucier, an engineer at Johnson Space Center, and Drs. DeBakey and Noon, famed heart surgeons at Baylor College of Medicine. They discussed creating a heart pump that would benefit patients with congestive heart failure. Saucier and a team of Johnson engineers joined with DeBakey, Noon, and colleagues at the DeBakey Heart Center at Baylor College to develop the initial design. The Johnson team built several versions of the device, based on the criteria and feedback supplied by DeBakey's medical team.

To solve these problems, help came from researchers Cetin Kiris and Dochan Kwak in the NASA Advanced Supercomputing (NAS) Division at Ames Research Center. Kwak, chief of the NAS Applications Branch, explained that they were asked to help because of their "experience with simulating fluid flow through rocket engines." According to Kiris, "The speed of fluid flow through a rocket engine is faster than blood flow, but very similar in many ways."

Using NASA supercomputers and computational fluid dynamics technology, which models the fuel and oxidizer flow through rocket engines such as the Space Shuttle main engine, the Ames researchers analyzed blood flow through the battery-powered heart pump. Based on the results, they suggested design improvements that reduced red blood cell damage to an amount well below acceptable limits. The improved blood flow pattern also reduced the tendency for blood clots to form by eliminating the stagnant regions. According to Kwak, "There are three groups who made this initial engineering effort successfulthe medical team led by Dr. Michael DeBakey and Dr. George Noon, the systems engineers at Johnson Space Center, and the Ames computational team that used NASA supercomputer know-how to help develop the VAD."

The road to commercial success for the VAD began in 1996, when NASA patented the heart pump and licensed it exclusively to MicroMed Technology, Inc., of Houston, Texas. MicroMed, organized by President and Chief Executive Officer Dallas Anderson to further develop the pump for critically ill heart patients, faced the challenge of converting the engineering device into a medical appliance that could be implanted. Within 2 years, MicroMed obtained international quality and electronic standards certifications, developed the ancillary components of the system, and received regulatory permission to begin clinical trials in Europe. In November 1998, a 56-year-old male was the first patient implanted with the MicroMed DeBakey VAD. According to Anderson, the pump functioned normally and to design specifications.

After 135 implants in Europe, MicroMed's product is commercially available at 12 European heart centers. In the United States, 25 patients successfully received the VAD as part of the 178 implants planned for clinical trials approved by the U.S. Food and Drug Administration (FDA).

The device presents several advantages for recipients. Weighing less than 4 ounces and measuring 1 inch by 3 inches, the MicroMed DeBakey VAD is approximately one-tenth the size of other currently marketed pulsatile VADs. This makes it less invasive and ideal for smaller adults and children. Because of the pump's small size, less than 5 percent of the patients implanted developed device-related infections, compared to an approximate 25-percent infection rate for larger VADs. Additionally, MicroMed's VAD can operate up to 8 hours on batteries, giving patients the mobility to do normal, everyday activities.

Currently, over 160 patients have received the MicroMed DeBakey VADwith no incidence of pump failure. Having successfully implanted the device lasting for periods over 1 year in individual patients, MicroMed is planning to launch its DELTA ONE™ study to provide evidence of its VAD as a heart transplant alternativewhich is also referred to as "destination therapy." MicroMed is the first company to use a next-generation, miniaturized device to conduct a clinical trial to address the use of a VAD for long-term destination therapy. Upon FDA approval for its investigational device exemption application, MicroMed will begin its clinical study, which is projected to include 65 patients at up to 20 U.S. sites. With new advances broadening the scope of the life-saving VAD, which won the 2001 NASA Commercial Invention of the Year award, thousands of individuals with heart problems stand to reap enormous benefits.

The MicroMed DeBakey VAD® is a registered trademark of MicroMed Technology, Inc.

DELTA ONE™ is a trademark of MicroMed Technology, Inc. 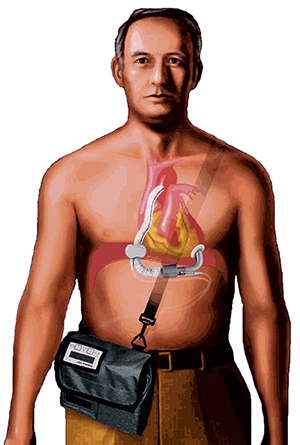 The MicroMed DeBakey VAD® functions as a “bridge to heart transplant” by pumping blood throughout the body to keep critically ill patients alive until a donor heart is available. 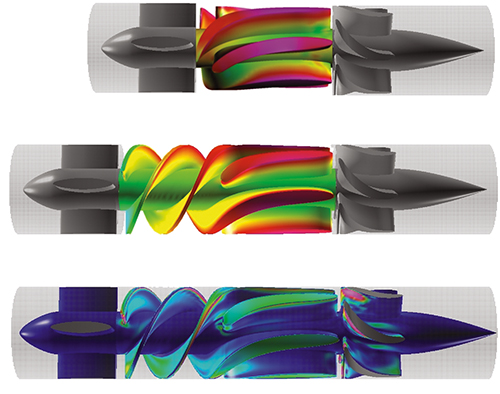 These illustrations show a visual comparison of the original ventricular assist device, top, and the unit after modifications by NASA researchers, center and bottom. Adding an inducer to the MicroMed DeBakey VAD® eliminates the dangerous back flow of blood by increasing pressure and making flow more continuous. The device is subjected to the highest pressure around the blade tips, shown in magenta. (Image courtesy NASA/Cetin Kiris)