While most parents would agree that playing video games is the antithesis of time well spent for their children, recent advances involving NASA biofeedback technology are proving otherwise.

The same techniques used to measure brain activity in NASA pilots during flight simulation exercises are now a part of a revolutionary video game system that is helping to improve overall mental awareness for Americans of all ages, including those who suffer from Attention Deficit Hyperactivity Disorder (ADHD). For years, scientists from NASA's Langley Research Center have researched and developed various physiological methods for assessing sustained attention, engagement, awareness, and pilot stress in laboratory flight simulators. Such tests are crucial to maintaining the focus of pilots, taking into consideration that the task of flying a plane can sometimes be monotonous.

One of the most progressive physiological methods to spawn from Langley biofeedback research is known as Extended Attention Span Training (EAST). As a modification of biocybernetic technology used to increase the mental engagement of pilots, EAST transcends conventional neurofeedback systems by taking the form of a video game that responds to brain electrical activity and joystick input.

Langley awarded CyberLearning Technology, LLC, of Plymouth Meeting, Pennsylvania, an exclusive license to transform the EAST technology into a fun and exciting video game platform that could safely improve brain functioning for individuals with attention disorders, as well as those who endure high stress and anxiety. In 2003, CyberLearning Technology released the S.M.A.R.T. (Self Mastery and Regulation Training) BrainGames system, an interactive, at-home training tool that is completely compatible with off-the-shelf Sony PlayStation® video games, including such popular titles as Gran Turismo,® Tony Hawk's Pro Skater,™ and Spyro the Dragon.™ The S.M.A.R.T. BrainGames product uses electroencephalogram (EEG) neurofeedback to make a video game respond to the activity of the player's body and brain. Signals from sensors attached to the player's head and body are fed through a signal-processing unit, and then to a video game controller. As the player's brainwaves come closer to an optimal state of attention, the video game's controller becomes easier to control. On the contrary, if a player becomes bored or distracted, the brainwaves stray from the desired stress-free pattern, and controlling the game becomes more difficult. This encourages the player to continue producing optimal patterns or signals to succeed at the game.

For example, if an individual is engaging in a race car game in which the goal is to post a fast time to qualify for the next race, it is important for him or her to maintain both speed and control. As the user improves focus, the S.M.A.R.T. BrainGames system will allow for faster speed and easier steering; if the user's focus wanders, the race car will lose ground and not qualify. In essence, the brain acts as the "accelerator," and the calmness acts as the "steering," notes CyberLearning Technology. In the case of ADHD, where relentless distractions and/or impulsive behavior take over, the biofeedback technology behind S.M.A.R.T. BrainGames has displayed great results in helping those with the disorder to concentrate and self-regulate.

After forty 1-hour sessions, both groups showed significant improvements in everyday brain-wave patterns, as well as in tests measuring attention span, impulsiveness, and hyperactivity. The key difference in the outcome, however, was motivation. According to Alan Pope, Ph.D., a psychologist from Langley's Crew/Vehicle Integration Branch and co-inventor of EAST, the video game group experienced fewer no-shows for testing and no drop-outs. Additionally, Pope adds that the parents were more satisfied with the results of the video game training, and the kids seemed to have more fun. He is also quick to note that violent video games are not recommended, but rather that car racing, skateboarding, and other skills-type games are best suited for the interactive technology. By adapting to today's most popular video games, S.M.A.R.T. BrainGames fully preserves high-tech entertainment value, unlike previous biofeedback methods that had a propensity to be too repetitive and simplistic. These training methods typically employed "go-no-go" games, in which animation or computer graphics would move along a predetermined path, lacking interactivity or user control over the game itself.

S.M.A.R.T. BrainGames' motivating and mind-expanding capabilities are also helping to deflect parental criticism regarding the negative influences of video games, such as their ability to keep children away from their homework, or from outdoor playtime activities that are valuable to their social development (CyberLearning Technology's clever answer to such concern is that it is now okay to tell kids to "go play your video games before your homework"). More so, the game system is a viable alternative to frontline medicine for ADHD patients, such as the stimulant Ritalin. Although Ritalin treatment has had great success in controlling the symptoms of ADHD, physicians generally agree that the drug is over-prescribed. CyberLearning Technology stresses that the S.M.A.R.T. BrainGames product should be viewed as an adjunct treatment to medicine, not as a competitor.

Pope notes that this spinoff could have "spin-back" applications for NASA. The Agency has future plans to use the video game concept to train pilots to keep their heart rates calm during emergencies, since a racing heart can affect decision-making. Researchers are also planning applications in attention management and peak-performance training in aviation.

CyberLearning Technology is working to introduce its product in other health-related sectors where biofeedback training may have benefits. This could possibly include a new type of therapy for aggressive driving behavior, otherwise known as "road rage."

Tony Hawk's Pro Skater™ is a trademark of Activision, Inc.

Spyro the Dragon™ is a trademark of Universal Interactive, Inc. 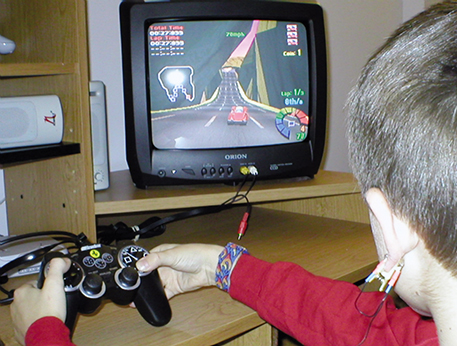 From flight simulation to brain stimulation: The S.M.A.R.T. BrainGames system uses electroencephalogram neurofeedback to make a video game respond to the activity of the player's body and brain. 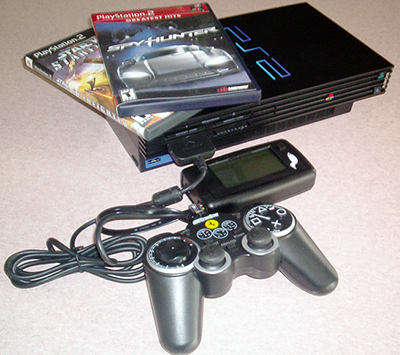 Compatible with off-the-shelf Sony PlayStation® video games, the interactive, at-home video training tool fully preserves high-tech entertainment value, unlike previous biofeedback methods that had a propensity to be too repetitive and simplistic.