Twenty-six years ago, Adam Kissiah delivered a medical wonder to the world that has resulted in restored hearing for thousands of individuals, and allowed thousands of others born deaf to perceive sound for the very first time.

Driven by his own hearing problem and three failed corrective surgeries, Kissiah started working in the mid-1970s on what would become known as the cochlear implant, a surgically implantable device that provides hearing sensation to persons with severe-to-profound hearing loss who receive little or no benefit from hearing aids. Uniquely, the cochlear implant concept was not based on theories of medicine, as Kissiah had no medical background whatsoever. Instead, he utilized the technical expertise he learned while working as an electronics instrumentation engineer at NASA's Kennedy Space Center for the basis of his invention. This took place over 3 years, when Kissiah would spend his lunch breaks and evenings in Kennedy's technical library, studying the impact of engineering principles on the inner ear.

Unlike a hearing aid, which just makes sounds louder, the cochlear implant selects speech signal information and then produces a pattern of electrical pulses in a patient's ear. A microphone picks up sounds and transmits them to a speech processor that converts them into digital signals. Although it is impossible to make sounds completely natural, because a mere 22 electrodes are replacing the function of thousands of hair cells in a normal hearing ear, the implant still serves as an excellent rehabilitative mechanism for hearing damage caused by disease, drugs, trauma, or genetic inheritance.

In 1977, NASA helped Kissiah obtain a patent for the cochlear implant. Several years later, he sold the rights of the technology to a company named BIOSTIM, Inc., for commercial development of the innovation. Although BIOSTIM is no longer in business, numerous hearing aid manufacturers have applied Kissiah's patented concept to their cochlear implant products. As the inventor himself puts it, the cochlear implant "only works one way."

It was not until just recently that Kissiah, now retired, started receiving the long-overdue recognition he deserves for this remarkable finding. Kennedy's awards liaison officer, Pam Bookman, who encourages the Center's employees to report their significant contributions, submitted Kissiah for a Space Act Award when she found out his research was drawn from engineering skills honed while with NASA. In 2002, he earned the prestigious award, which included a signed certificate from NASA Administrator Sean O'Keefe and $21,000, the largest monetary award ever given to a single inventor in Kennedy's history.

Perhaps just as rewarding was the opportunity for Kissiah to meet fellow Space Act Award recipient Allan Dianic, an ENSCO, Inc., employee who works with NASA's Applied Meteorology Unit. Dianic's 2-year-old daughter, Victoria, regained full hearing after receiving a cochlear implant just 2 months before the ceremony. It was discovered that Victoria was deaf when she was 9 months old. Now, she can hear for the first time.

In April of 2003, Kissiah was officially inducted into the Space Foundation's U.S. Space Technology Hall of Fame for his invention. Administrator O'Keefe, former astronaut Donald McMonagle, and former astronaut and NASA Administrator Vice Admiral Richard Truly were on hand for the activities; Kennedy Director Roy Bridges, a former astronaut and retired Air Force Major General, accepted the award on behalf of Kissiah and Kennedy (Bridges has since been named director of Langley Research Center). In the face of the latest attention surrounding his technological development, Kissiah has remained extremely humble about his role. "Regardless of what level of participation I had, it is nice to know I contributed to making many lives better," he noted.

The Cochlear Implant Association estimates over 66,000 patients have received an implant, creating what is today a $1.65 billion industry. The American Speech-Language-Hearing Association further states that cochlear implantation consistently ranks among the most cost-effective medical procedures ever reported. In early 2002, popular radio talk show personality Rush Limbaugh revealed during a live broadcast that the "medical marvel" allowed him to hear his show again for the first time since learning he was suffering from near total deafness several months earlier. Limbaugh told his nearly 20 million listeners in October of 2001 that an autoimmune inner-ear disease caused him to lose 100-percent hearing in his left ear and 80-percent hearing in his right ear. Despite this damage, Limbaugh continued his daily broadcasts, responding to callers with the aid of a teleprompter and assistance from his staff.

Heather Whitestone McCallum, who became the first deaf woman to be crowned Miss America in 1995, received a cochlear implant in 2002 and is hearing sounds she never heard before, including the voices of her children. Amy Ecklund, a longtime actress on the daytime soap opera "Guiding Light" and deaf since the age of 6, also regained her hearing with assistance from a cochlear implant in 1999.

Sprung from the mind of an engineer, this medical miracle is a perfect example of how NASA knowledge is boundless and can touch the lives of many in ways unimaginable. 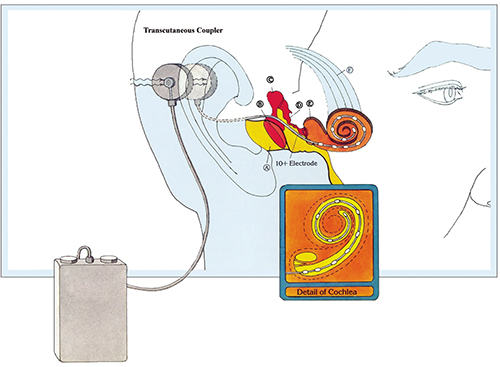 The cochlear implant selects speech signal information, transmitted to it from a microphone and speech processor, then produces a pattern of electrical pulses in a patient's ear. 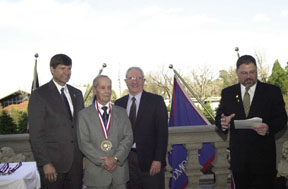 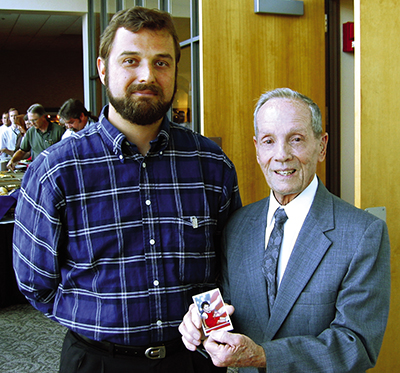 Adam Kissiah (right), a retired Kennedy Space Center engineer, shows a photo of Allan Dianic's daughter, who has benefited from a cochlear implant that Kissiah developed while at NASA. Dianic (left) is a software engineer with ENSCO, Inc., and a member of NASAs Applied Meteorology Unit. Kissiah received an exceptional category NASA Space Act Award for his technology breakthrough during a technology awards luncheon held at Kennedy's Visitor Complex Debus Center in 2002.