A Robot to Help Make the Rounds

What employee never takes a vacation or a break, never calls in sick, works around the clock 365 days a year, has more than 3 million hours of experience, and is qualified to work in dietary services, radiology and medical record departments, pharmacies, central supply, and laboratories? The answer is a competent, cost-effective robotic courier that enables hospitals to redirect staff to more valuable roles.

The HelpMate trackless robotic hospital courier was designed by Transitions Research Corporation, a think-tank company formed in 1984. Over the course of 10 years, Transitions Research Corporation received funding for this developmental effort from NASA, through seven Small Business Innovation Research (SBIR) awards with Johnson Space Center. Notably, Johnson granted the company Phase I and Phase II SBIR funding in 1995 to support the conception of the two-armed, mobile, sensate research-robot, projected to allow development and demonstration of robotic support tasks for NASA on-orbit mechanisms.

In 1997, Transitions Research Corporation went public, and changed its name to HelpMate Robotics, Inc., to emphasize the one product by the same name that was to be introduced to the commercial marketplace. Two years later, Pyxis Corporation, the San Diego, California-based Automation and Information Services division of Cardinal Health, Inc., purchased the assets of HelpMate Robotics, Inc., subsequently acquiring the rights to the HelpMate robotic courier technology.

Known today as the Pyxis HelpMate® SecurePak (SP), the 4-foot-tall, 600-pound trackless robotic courier has evolved significantly from the original design blueprint. According to Cardinal Health, the Pyxis HelpMate SP is the first system of its kind to navigate autonomously through hospitals and other medical facilities—including independently calling and using elevators—without the use of external guidance systems such as fixed tracks or guide wires. It offers an extremely reliable and less expensive replacement for human couriers, while allowing nursing and pharmacy staff and other skilled health care workers to spend less time running errands and more time providing patient care.

The Pyxis HelpMate SP is battery-operated and employs state-of-the-art technology, wireless radio, and proprietary software to guide it from point to point. With a 200-pound payload and various lockable compartments for storage, the robotic courier is capable of smoothly transporting pharmaceuticals, laboratory specimens, equipment and supplies, meals, medical records, and radiology films back and forth between support departments and nursing floors. In a laboratory setting, it delivers test results back to clinicians in a timely manner, leading to more accurate diagnoses and treatments. Its proven track record for seamless deliveries also helps to eliminate concerns regarding biohazard spills. In the pharmacy, the courier reduces delivery costs, increases productivity, and provides tighter security for medications and supplies.

Pyxis HelpMate SP's easy-to-use color touch screen entitles its human operators to send it to virtually any location in a hospital. Facilities using multiple couriers can centrally manage the robots through a monitoring system to determine location, status, and project destination arrival times. Because they are equipped with radio antennas, the couriers are capable of communicating with each other directly or via a radio frequency Ethernet system.

The source of vision for the original HelpMate was a structured-light vision system, comprised of a camera that sought out objects up to approximately 8 feet in front of the robot. The camera differentiated between obstacles at different distances and altered the course of the robot to maneuver around them. Two infrared strobe lights, positioned 6 inches and 18 inches off of the floor, provided planes of lights for the camera to detect the objects in front of it. A laser scanner replaced the structured-light system in Pyxis HelpMate SP. The new laser scanner provides a wider field of view (180º as opposed to 60º with the camera), finer resolution, and improved reliability. Turn signals, emergency-stop buttons, and contact bumpers are also included as added safety mechanisms.

To date, nearly 100 Pyxis HelpMate units have been sold to hospitals within the United States. The technology presents hospitals and other medical organizations with the financial options necessary to cost-effectively align fiscal goals and strategies, especially when faced with increased labor shortages, fluctuating patient census, and the economic challenges that are currently impacting the health care field.

HelpMate® is a registered trademark of Cardinal Health, Inc. 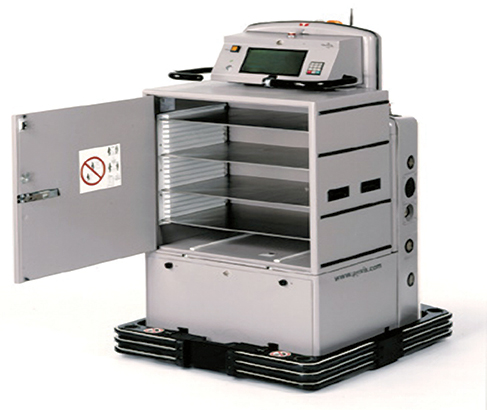 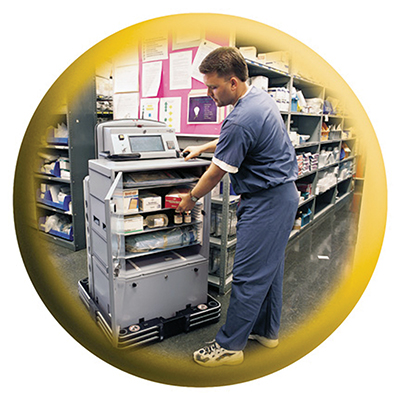