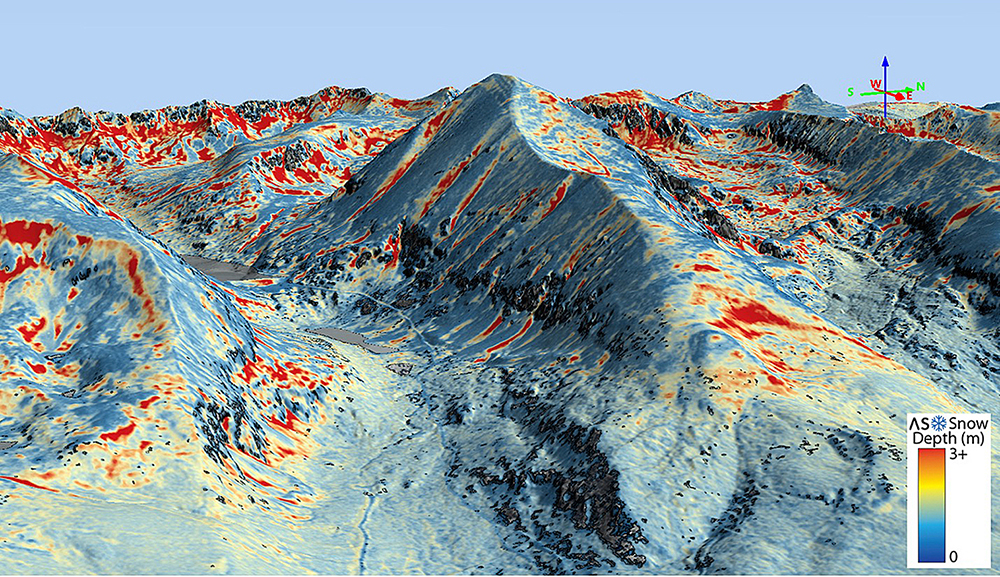 How much water is in mountain snowpack? That’s a question science has been attempting to solve for decades. Finally, NASA-developed technology provides an accurate answer, using a cutting-edge airborne sensor system and sophisticated software that also predicts when snow will melt. For NASA, this is another step toward measuring frozen terrain elsewhere in the solar system, such as Saturn and Jupiter’s icy moons. Meanwhile, it’s already supporting flood prevention, drought mitigation, and sustainable farming on this planet.

Calculating how much water is contained in snowpack is not easy. There have been numerous attempts to use satellites for the task, but measurements from imagery gathered at about 400 miles above the ground are not very accurate – and field measurements on the ground can only provide snapshots of particular locations.

However, around the world, human populations depend on snow for freshwater. And as climate change wreaks havoc on precipitation patterns, those communities have become increasingly unable to predict how much water is coming their way. It’s like turning on a faucet and not knowing if you're going to get a trickle or a month's worth of water blasting out, explained Tom Painter, CEO of Airborne Snow Observatories Inc. (ASO)

Painter is the former lead scientist for the Airborne Snow Observatory mission at NASA's Jet Propulsion Laboratory in Southern California. There, he was instrumental in developing remote-sensing analyses and modeling with lidar and spectrometer sensors on an airplane to measure snow depth and melt rate. After successfully collecting and analyzing data for the Tuolumne River Basin in California, the Uncompahgre River Basin in Colorado, and elsewhere, Painter cofounded a company that uses this unique system to measure snow around the world.

Formed in 2019 in Mammoth Lakes, California, ASO uses the technology developed at NASA to provide mountain snowpack data in the United States and abroad to farming organizations, municipalities, state agencies, hydroelectric utilities, researchers, universities, and consulting groups in addition to federal agencies, including the Bureau of Reclamation and the U.S. Geological Survey.

Seasonal snow covers approximately 31% of Earth's land area. The snow on mountain ranges like the Himalayas in Asia, the Zagros in the Middle East, and the Andes in South America feeds rivers that provide drinking water to more than 1.5 billion people.

With climate change making it hard to rely on historical trends for accurate predictions, the communities that rely on snowmelt need accurate real-time measurements to plan and adapt, said Dan Berisford, who was flight coordinator for the original team at JPL. He now works part-time for ASO.

Referring to the NASA mission, he said, “We collected a data point per square yard for an entire mountain range.” The result was several million times as many data points as were collected previously from automated stations and field measurements.

The JPL team started by creating a 3D map of each mountain before it snowed. These were generated with airborne lidar sensors, which work like radar but use light instead of radio waves. The time it takes for a laser pulse to reach the surface and bounce back to the plane measures the distance. Subsequent flights during the snow season also took lidar measurements. By comparing the two, scientists measured the depth of snow.

The team also used an imaging spectrometer to determine how reflective the snow is because darker snow absorbs more sunlight and therefore melts faster.

An End to Guessing

ASO licensed the software developed for the NASA mission from the California Institute of Technology, which manages JPL. This lets the company combine flight data with field measurements and other information such as weather conditions. The result accurately shows the snow depth, snow-water equivalent, and how long it will take the snow to melt.

Wes Monier, chief hydrologist for the ‎Turlock Irrigation District in California, worked with NASA during test flights and is now an ASO customer. His department relies heavily on the company’s computer models to supply adequate water to residents, businesses including 5,000 farms, and the ecosystem. Monier compared traditional field measurements to using a thermometer and ASO data to an MRI.
“You get a three-dimensional image of the whole landscape,” he said. That knowledge about watershed health makes it possible to plan for wet and dry months throughout the year, as well as periods of drought or flood.

During a drought, that means preparing for the impact on hydroelectric systems and ensuring farmers can irrigate crops. Conversely, knowledge about heavy runoff can prevent devastating flooding and optimize hydroelectric power production.

Scientists at research institutions around the world also buy ASO’s datasets to support areas of study from mountain habitats to downstream ecosystems, because the data is comprehensive and proven. Representatives from Nepal, India, South America, and numerous other regions have been working with ASO to build programs for assessing the changes to snowpack.

Abstract
Calculating the amount of water in mountain snowpack is now possible with NASA-developed technology. Airborne Snow Observatories Inc. measures the depth and quality of snow to accurately calculate when and how much water will be available downstream. 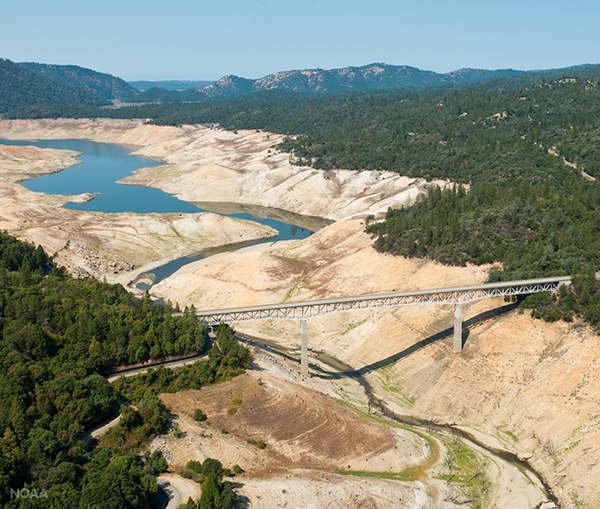 Both drought and flooding cause significant damage in a river basin, so it’s important to know the volume of water that will reach a dam during snow melt. The Oroville Dam lake on the Feather River in the Sierra Nevada foothills experienced both extremes. Airborne Snow Observatories provides snowpack data to help municipalities, residents, and businesses prepare for winter runoff. Credit: NOAA

Measuring snow depth and quality in the highest elevations of a mountain chain requires special sensors. NASA collected hyperspectral and lidar data from several mountain chains, using the technology to accurately measure snow depth and snow quality to calculate the amount of water contained in the snowpack. Credit: NASA