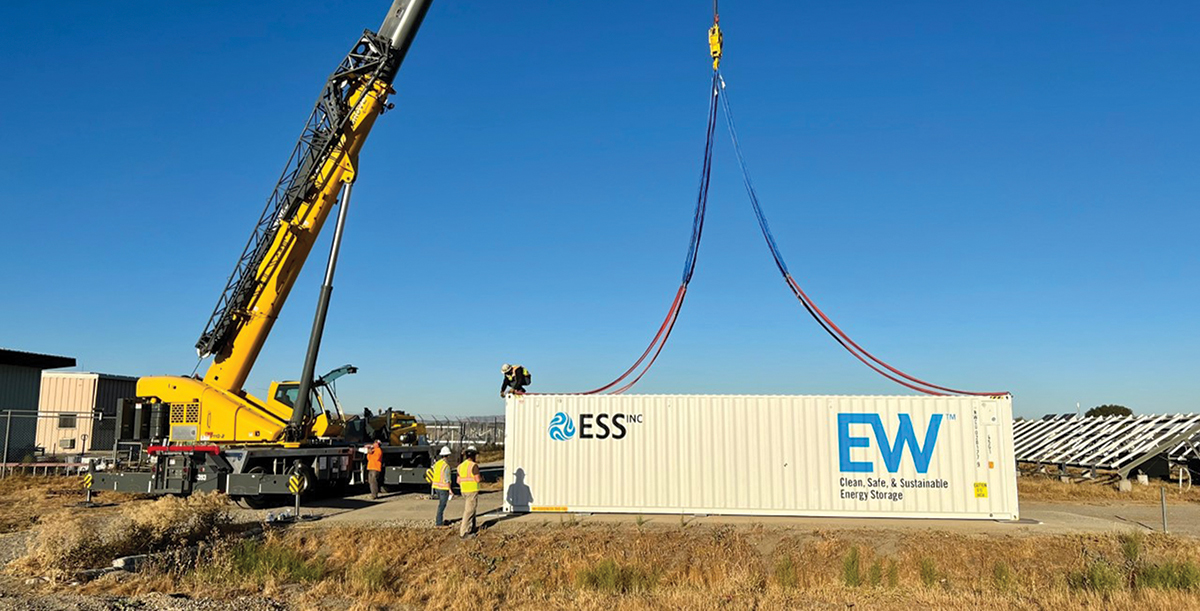 Solar power is abundant – when the Sun is shining. Wind power is steady – when the wind is blowing. And a power grid is extremely convenient – until there’s an outage.

But creating a steady supply of electricity from intermittent power sources is a challenge.

NASA was focused on this problem more than 45 years ago, when the agency designed a new type of liquid battery during the energy price shocks of the 1970s.

And while engineers continued over the following decades to develop flow batteries, as they’re called, the technology has drawn even more attention in recent years, with the urgency of climate change powering a larger-scale transition to renewables like solar and wind.

Wilsonville, Oregon-based ESS Inc. built on NASA’s early work as the company developed its own flow batteries using only iron, salt, and water.

Requiring no heavy-metal mining or disposal, the systems are among the safest energy storage solutions available, according to the company. With no corrosive parts, they provide like-new performance after daily use for more than 20 years and necessitate only simple upkeep to go longer. They can easily be scaled up as needed.

NASA’s decades-old work on flow batteries, much of which is public-facing and easy to access, provided the ESS team with creative ways of looking at common problems with the technology, said Craig Evans, the company’s founder and president.

“It always goes back to research,” he said. “If you don’t have to reinvent the wheel, you can certainly get things done faster.”

It’s probably fair to say that all flow batteries today owe something to the major push the technology got in the 1970s and ’80s, when a NASA team of chemical, electrical, and mechanical engineers developed an iron-chromium flow battery (Spinoff 1985, 2008) at Lewis Research Center – now Glenn Research Center – in Cleveland.

The NASA system, which won agency awards, involved two tanks of liquid electrolyte solutions, one infused with iron chloride and the other with chromium chloride. These electrolytes were pumped through the battery cell, triggering a chemical reaction through a membrane that separated the two solutions inside the battery.

During charge, electrical energy was converted to chemical energy and stored in the electrolyte liquid. To discharge the energy, the process was reversed.

When the ESS team began developing its own flow battery in 2011, the company founders wanted to use iron, the most abundant element on Earth, as NASA had. They found they could pair it with a simple salt solution, which was cheaper to obtain and easier to work with than the chromium mixture NASA had used.

A Boon for Companies

ESS flow batteries are designed for grids that are increasingly powered by intermittent wind and solar generation. The company’s systems store up to 12 hours of energy and discharge it when needed. They have been deployed, for example, by San Diego Gas & Electric in a microgrid designed to provide backup power to critical community facilities, fueled by an on-site solar array.

They also work at stand-alone businesses and factories – for example, Sycamore International, a commercial facility in Pennsylvania – where they help to level out energy captured from rooftop solar panels, for instance. This enables factories to store energy generated by the panels during peak sunshine hours and use it throughout the day.

Such installations can also end up functioning as an alternative to, say, a backup diesel generator that keeps a building operating during power outages or power safety shutoff events, which are increasingly common on the West Coast during wildfire season.

Diesel generators emit harmful pollutants, and they are fire hazards themselves. Another technology, lithium-ion batteries, which are commonly used in electronics, can be scaled up to grid- or microgrid-size installations, but they present fire hazards, are not viable options for storage durations beyond a few hours, and require lithium, which is environmentally problematic.

“The ability to install a technology like ours, which is nonflammable and clean from cradle to grave — that’s a huge boon for companies looking to stay up and running during an outage,” Evans said.

ESS went public in late 2021 and, in 2022, announced that it would be expanding in Europe, with its two battery products: the Energy Warehouse, a turnkey battery system built inside a shipping container, and the Energy Center, a larger, utility-scale “battery-in-a-building.”

The company expects to ship between 40 and 50 systems in 2022 and said it had additional orders beyond that.

Lessons from the Past

To increase the amount of energy that can be stored in a liquid flow battery, one simply needs to add more electrolyte solution – an advantage of this technology. To increase the power, one can stack additional battery cells through which the electrolyte is pumped.

But as the electrolyte travels through the system, it loses energy between each battery cell, an inefficiency called shunt losses. NASA worked to mitigate shunt losses in its flow battery system and published research on the issue in 1982. ESS drew from that work to make its own system more efficient.

Pulling research from the agency’s website and libraries, ESS also referred to NASA guidance on handling hydrogen (which results from a side reaction in the ESS system and then is reincorporated back into the system) as well as research on the membrane that separates the electrolyte mixtures.

Thomas Miller, a research engineer at Glenn who worked on the flow battery project as an undergraduate in the late 1970s, recalled that all of the system hardware was custom built, developed through trial and error.

After the flow battery project, which was funded by the U.S. Department of Energy, Miller said some of the knowledge gained went on to inform NASA’s work on regenerative fuel cells and other technologies.

“NASA is funded by taxpayers, so we’ll do the research and then turn it over to industry to take it from there,” Miller said. “This is a good application of our basic research.”

Abstract
A large, nontoxic battery that can store energy from the wind or sun was developed by Wilsonville, Oregon-based ESS Inc., which drew from flow battery research and development conducted in the 1970s and '80s at what is now the Glenn Research Center in Cleveland. 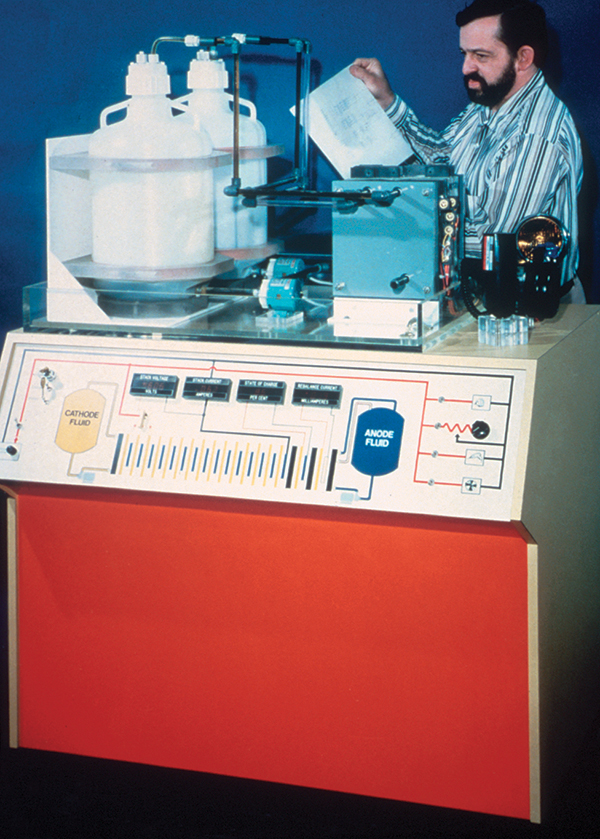 In developing its flow battery, ESS drew from groundbreaking research and development conducted by the space agency more than 40 years ago. Pictured here, a 200-watt demonstration unit of the flow battery NASA built in the 1970s and 1980s. Credit: NASA

ESS flow batteries enable a steady supply of electricity from intermittent energy sources, such as wind and solar. They store up to 12 hours of energy and discharge it when needed. They can be built in shipping containers, like the one being installed in the picture here, or larger installations can be housed in a building. Credit: ESS Inc.