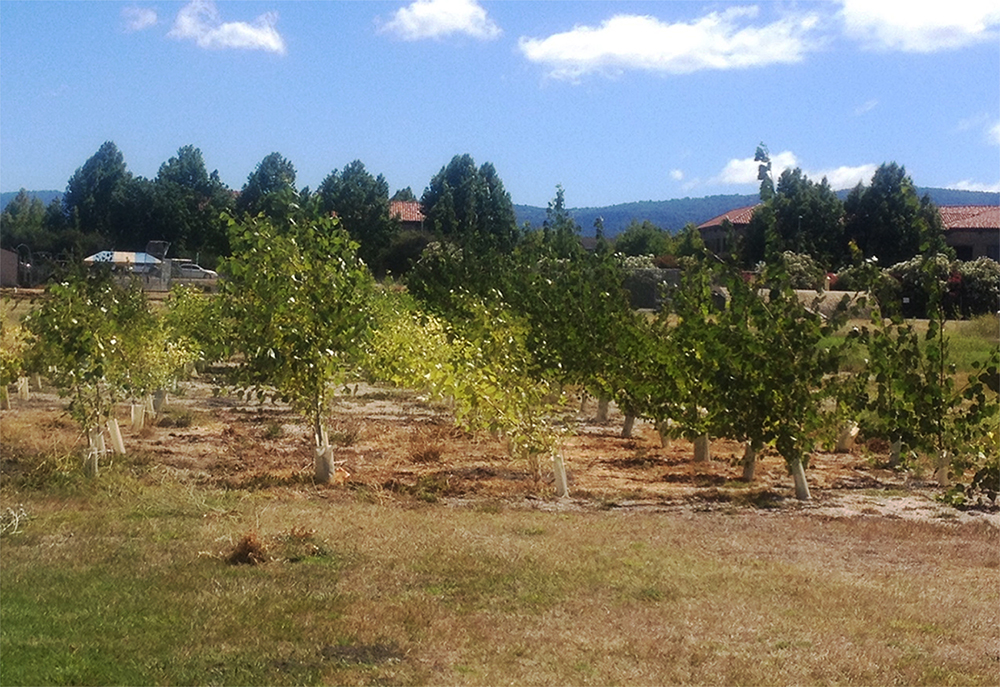 NASA explores outer space, but it’s also owner and steward of hundreds of square miles of planet Earth. Populated with scientists and engineers, the space agency’s field centers have experimented with various methods to preserve the land they sit on, several of which have found use around the rest of the planet.

The latest of these – first field-tested at Ames Research Center in Silicon Valley, California, and now in use at about 30 environmental remediation sites around the country – originates entirely in biology. About a thousand trees at Ames eliminate decades-old industrial contamination with the help of symbiotic bacteria. The bacteria, a strain known as PDN3, and their poplar tree hosts work better than the costlier and more labor-intensive system of pumping out and treating the contaminated groundwater.

The concept had been proven in a laboratory, but before it could be deployed on a large scale, it had to be tested in actual trees in the field.

At the time, Dr. John Freeman was the science test lead for space station seedling growth experiments and other work inside Ames’ Space Biosciences Division as a contractor with Intrinsyx Technologies Corporation, an engineering and biosciences company and NASA subcontractor located at the center’s NASA Research Park. But he also had experience with phytoremediation – the use of plants to remove and break down environmental contaminants.

Freeman was interested in the work of University of Washington professor Dr. Sharon Doty, who was working on inoculating plants with specific strains of symbiotic bacteria, known as endophytes, that would eliminate contaminants more efficiently and help the plants thrive while doing so.

Her technique had never been tried outside a laboratory, and Ames was the perfect field trial location.

New Solution to an Old Problem

Since the 1990s, Ames has been working on cleaning up groundwater contamination from a computer chip manufacturer that used to be located next door. The main pollutant is trichloroethylene (TCE), a solvent commonly used in metal parts degreasing, dry cleaning, and other applications until it was found to have adverse health effects. It’s one of the most widespread contaminants at environmental cleanup sites around the world.

Freeman and Edenspace Systems Corporation, another company with offices at Ames Research Park, approached the Ames Environmental Management Division about setting up a pilot project to put Doty’s lab work to the test.

“Dr. Freeman was already an expert in phytoremediation,” said Ahsan Ali, who was then director of business development at Intrinsyx Technologies, “but we had to learn how best to inoculate poplar trees, the best ways to deploy them, and how to monitor or quantify the results.”

“If it worked, we could replace pump-and-treat and cut back on the cost of cleanup,” said Don Chuck, the division’s chief. He helped convince center leadership to grant clearance for the project, and a spot was chosen based on data Ames had compiled on the contamination.

“It took quite an effort,” said Joe Lukas, manager of the Ames Environmental Restoration Program for support contractor Earth Resource Technology (ERT) Inc. This included selecting the location with the highest incoming contamination for the tree plots and then planting and growing hundreds of trees. The project was carried out at no official cost to NASA, but Ames employees, contractors, and interns helped Freeman plant and water the trees, install a drip irrigation system, maintain the plots, and even end a gopher infestation that threatened the saplings at one point, Lukas said.

As the poplars grew large and their roots reached the water table, ERT personnel installed two test wells to take groundwater samples – one where the groundwater flow enters the grove and the other where it exits – and tested the water from both wells for contamination. The results were dramatic.

Poplar trees were chosen in part for their deep, thirsty root systems and because they can grow from unrooted cuttings. At Ames, the cuttings were soaked in a solution containing the endophyte bacterial inoculum before planting. Rows of uninoculated cuttings were also planted as a control group.

“At the end of the first season, the inoculated trees were big and green,” said Freeman. “The control trees were visibly stunted and yellow.” Although poplar trees have long been recommended for removing groundwater contaminants, the job often sickens them, hampering their growth and effectiveness or outright killing them as pollutants accumulate, he said.

But the bacteria thrive on eating TCE and similar compounds, consuming the molecule’s carbon backbone and exuding chloride ions that end up as a harmless by-product in adjacent soil. Trunk core samples later taken from the trees found barely detectable levels of TCE in the inoculated trees, while those in the control group had tree core concentrations almost as high as the contaminated groundwater.

And by 2016, the groundwater collected from the test wells at each end of the grove told its own story. While samples from the well where contaminants entered the grove contained TCE at concentrations of 280 to 300 parts per billion (ppb), concentrations in the outflowing water were below the Environmental Protection Agency’s standard of 5 ppb for acceptable levels in drinking water.

By this time, Edenspace had dissolved, and Intrinsyx Technologies started a new division called Intrinsyx Environmental, located in Mountain View, California, which took over the project. With Freeman as its chief science officer and Ali as chief operating officer, Intrinsyx Environmental took what it had learned and went into the endophyte-assisted phytoremediation business.

Its first customer was Ames, which purchased another 500 inoculated poplars in 2017.

“It’s definitely much more effective and less expensive to maintain and weed between the trees and groves than it is to run pump-and-treat 24/7,” said Lukas. He estimated that putting a grove in place cost about half a year’s budget for pumping and treating groundwater, “and once it’s in place, it just sits and does its thing.”

Freeman said the partnership benefited both parties. “It’s one thing to know it works in a greenhouse or petri dish, but how’s it going to perform inside a tree in the field? Is it really going to clean it up? And now, thanks in part to our collaboration with NASA, we know the answer is yes,” he said. “NASA did a great job helping us with setting up the test plots and planting the trees and collecting the analytical well water data, and without them we’d be much further behind.”

Ames also helped broadcast the results of the pilot project, getting the word out to regulators and engineers, Freeman said.

Intrinsyx Environmental now has stands of poplars, willows, and other trees inoculated with endophyte bacteria that consume TCE as well as petroleum products at dozens of sites around the country. The Arbor Day Foundation is even working with Intrinsyx to get endophyte-enhanced trees in the ground nationwide. These are expected to include new endophyte strains selected for explosives and two other common contaminants known as 1-4 Dioxane and polychlorinated biphenyls or PCBs.

Intrinsyx is also in talks with other NASA field centers where groundwater contamination is an issue. And the successes with combining plants with helpful endophytes led to another spinoff company, Intrinsyx Bio, which is using a different set of tree endophyte bacteria to help crop plants better capture nutrients for modern agricultural purposes. It’s a technique that has broad application for agriculture on Earth but is also of interest to NASA for growing plants in spacecraft and, eventually, on the surface of the Moon or Mars, said Freeman, noting that the company plans to work with Ames’ leading plant physiologist, Dr. David Bubenheim, to test strains of microbes for both agricultural and advanced life-support applications.

“The endophyte work completed by Intrinsyx so far shows real promise for improving the efficiency of nutrient uptake in a wide range of plants, especially in stressful environments,” said Bubenheim.

Abstract
The use of symbiotic bacteria to help trees eliminate environmental contaminants got its first field test at a NASA center, leading to the formation of Moffett Field, California-based Intrinsyx Environmental. The company’s trees are now cleaning up pollution across the country. 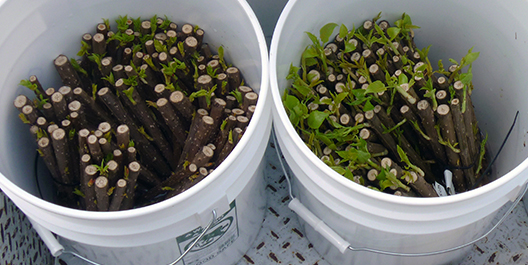 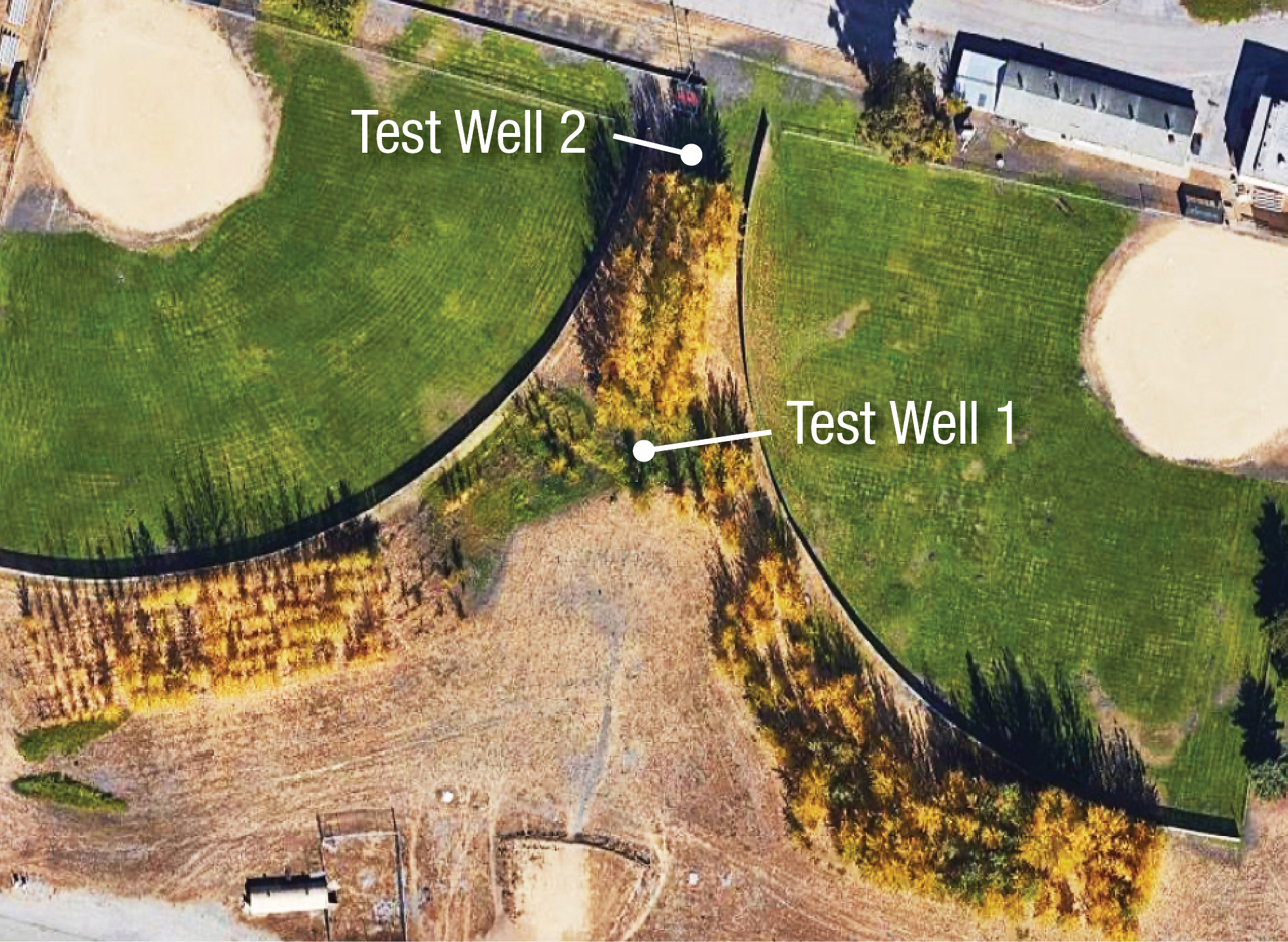 The first grove of inoculated poplars and uninoculated control trees was planted between two baseball fields at Ames. As the trees took root, center personnel installed a test well at each end of the plot to compare contaminant levels in groundwater flowing into the grove against water coming out. The results were so dramatic that the center purchased two more stands of inoculated poplars, seen here just south of each baseball field. Credit: Google Earth 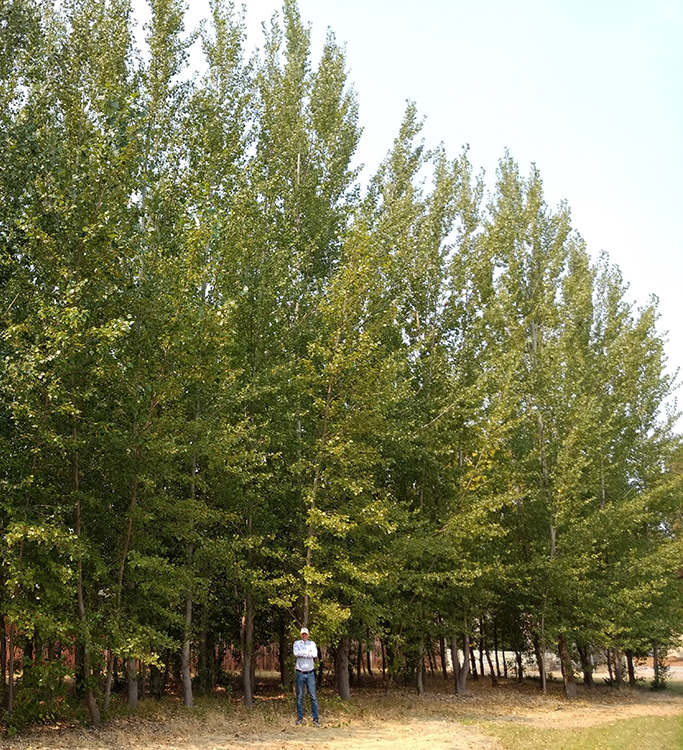 In 2014, one year after planting at Ames, the rows of poplars inoculated with microbes to help them break down a contaminant present in the groundwater are noticeably larger, greener, and healthier than the rows of uninoculated trees forming the control group. Credit: Intrinsyx Environmental