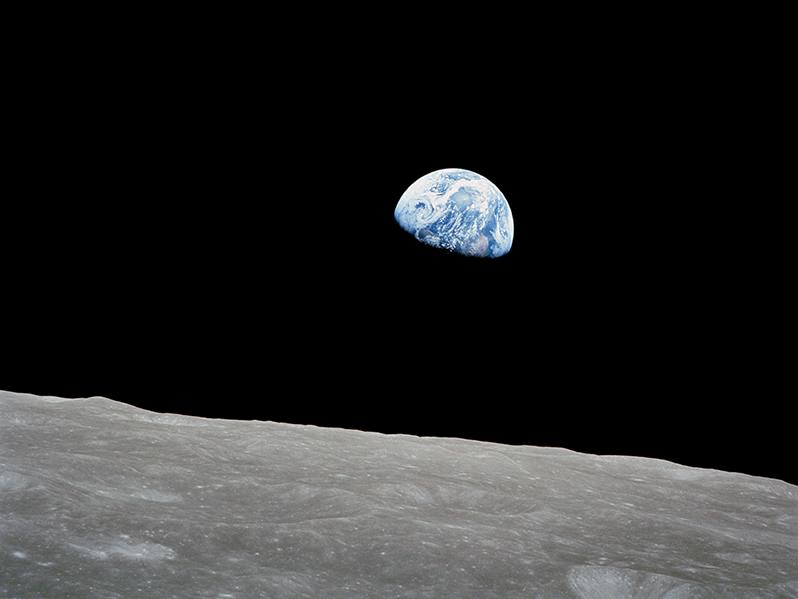 The number of illegal gold mines in the Amazon is increasing so fast that activists have turned to satellite imagery to identify them. Still, with thousands of new mines a year, the work was overwhelming scientists at Earthrise Alliance – they needed more hands on deck. That’s how ninth graders in Weston, Massachusetts, began locating illegal mining activity in Brazil’s protected Yanomami territory.

Earthrise is one of numerous organizations getting Earth-observation images, data, and analysis – much of which NASA makes available for free – into the hands of people working on sustainability projects. These efforts by many different aid groups are tracking illegal mining, deforestation, and groundwater resources and informing the decisions of small farmers and governments trying to support them in regions that are feeling the worst effects of climate change.

Earthrise was working with Survival International, a group that has been reporting on illegal mines in the Yanomami territory for years. Miners bring disease, like malaria and tuberculosis, which can devastate local tribes that have had little contact with people outside their communities, according to Survival International. The highly contagious novel coronavirus now also threatens the region. In addition, the mines themselves pollute the land and waterways with mercury and other toxic substances.

Earthrise illustrated a striking rise in the number of new mines in the area in a graphic for Survival International. A few months later, shortly before schools across the United States closed in early 2020 amid the global pandemic, Earthrise asked Weston High School freshmen to comb Earth-observation data for environmental stories.

Examining satellite imagery from NASA, the European Space Agency, and the company Maxar Technologies, the students identified previously unreported illegal mines. The program is part of the Earthrise Education initiative, which provides students with an internet-based tool to use satellite imagery to investigate real problems that are in the news.

Headquartered in Washington, D.C., the Earthrise Alliance was founded in 2019 by former NASA officials as a merging of several projects that were using space resources to improve environmental conditions on Earth. The organization’s chief technology officer, Dan Hammer, previously worked as a presidential innovation fellow with NASA’s chief technology officer for information technology, where he made NASA data more accessible to the public.

“We offer additional perspective, which was the idea of Earthrise in the first place,” said Hammer, referring to the Apollo 8 photo for which the organization is named. Taken during the first crewed mission into lunar orbit, the photo shows Earth rising over the Moon’s horizon, giving humanity a first glimpse of the home planet from another celestial body.

NASA has been looking back at Earth since the agency was established. In 1960, the agency began sending satellites into orbit to capture Earth images to improve weather predictions and maps. In 1961, Alan Shepard caught a view of Earth as the first American in suborbital space with Project Mercury.

Astronauts in the Apollo program in the 1960s and ’70s received photography training, not only to learn how to use the equipment, like cameras bracket-mounted to their spacesuits, but also to develop an eye for science images. These efforts led to the Earthrise photo and other famous images, including the iconic Blue Marble shot.

Images from these early Mercury and Apollo missions were the inspiration for the Landsat Program, which in 1972 launched the first satellite tasked specifically with observing and collecting data on Earth’s landmasses. The program has been in continuous operation since then, in partnership with the U.S. Geological Survey, which currently operates Landsat 8.

Today NASA has a fleet of satellites gathering Earth data, in addition to ambitious airborne and ground-based observation campaigns. Other governments and private companies have billions of dollars’ worth of satellites looking back at Earth. NASA also has the resources to process this data and develop predictive models and analysis.

The agency makes its Earth data available for free to the public. In some cases, organizations are working directly with NASA, benefiting from the agency’s computing power, modeling, and analysis. Organizations can also access the rapidly increasing Earth-observation data from the space agency and other governments and companies around the world.

The problem of illegal gold mines isn’t unique to Brazil. It’s a global phenomenon that gets worse when gold prices rise.

Davis Adieno, who oversees the collaboration from Nairobi, Kenya, where he is program director for the Global Partnership for Sustainable Development Data, said the project is also forward-looking.

“The Ghanaian government is using this data to communicate the impact of illegal mines, but also, more importantly, how areas that have already been impacted could be recovered,” he said.

Working with the Global Partnership and other partners, NASA’s Brian Killough produced the initial data cube platform for five African countries – Ghana, Kenya, Sierra Leone, Senegal, and Tanzania – tailoring it to specific projects and training initial users. The successful model has now been scaled up for Digital Earth Africa, which makes free Earth-observation data available and usable in an increasing number of countries across the continent.

Data cubes are stacks of satellite data configured to allow the use of powerful cloud computing and rapid analyses, Killough explained. Satellite data from many days or years can be organized into a cube, with dimensions of space (latitude and longitude) and time. These cubes are made of small pixels that hold data at a scale of 30-meters – about the size of a baseball diamond – which is Landsat’s resolution. Once in a cube, it is much easier to analyze and apply the data.

Killough and his team at NASA’s Langley Research Center in Hampton, Virginia, work directly with the users of the data resources they’ve created.

“We help them interpret the data and adjust the tools for their needs,” he said. “We also conduct training in each country, where we give people an understanding of the data and tools and let them use it on their own.”

Adieno said Killough “introduced what is possible – what type of data is available, the duration, what you can actually do with the infrastructure, with the algorithms that are available – which helped the countries identify who was best-placed to use it.”

In most cases, the satellite data tools are being used by people who have already been working with satellite imagery, but with less powerful capabilities and extremely cumbersome and often untenable downloading and processing times.

Adieno said officials in Senegal purchased private data for their project but then later moved to the data cube infrastructure for their analysis. “The results were more or less the same, which means they didn’t need to spend that money,” he said. “The value here is access to free, open source satellite data that’s analysis-ready.”

Killough agreed. “People in the developing countries we’ve been working with recognize that satellite data could have a huge impact,” he said. “But they have struggled with the preparation and the understanding of how to directly apply it to their applications. That’s where I think we’ve made great progress.”

Addabor worked with Killough to use Landsat data to identify the rate at which small farmers in the country’s north are adopting new growing techniques, like using drought-resistant seeds. This type of information helps the government determine the best ways to support small farmers in remote areas who are making decisions individually while also playing a major role in the country’s food security.

Indeed, unlike large agricultural producers in Europe and the United States, the vast majority of farmers around the world are working small plots of land, feeding much of Earth’s population without coordination. These farmers are disproportionately affected by decreasing water resources and rising temperatures.

“In many places, if farmers don’t make that one right decision, it can mean the whole year is incredibly challenging for them. It can mean that the kids don’t go to school or families don’t have enough to eat,” said Eliot Levine, director of the Environment Technical Support Unit at Mercy Corps.

The Portland-based organization has been providing humanitarian relief around the world for decades and, more recently, is working with NASA on a partnership that uses satellite data to support science-informed policy and sometimes deliver information directly to people who need it.

Mercy Corps and NASA are collaborating in Kenya to reach farmers with a combination of precise weather and agronomic information. The work is part of Mercy Corps’ AgriFin program, which focuses on building the capacities of smallholder farmers, using cellphones and texting technology to deliver information about weather forecasts, seed types, financial products, market prices, and other relevant resources.

“Through our partnership with NASA, we are providing farmers with information and tools they have never had access to before,” Levine said.

“Should you plant now or wait? Water now or wait because rain is coming? Farmers need access to information,” Levine said. “We envision a future where every smallholder farmer prospers in a digitally interconnected world.”

The effort is part of a growing collaboration between NASA and Mercy Corps, a partnership that began in 2015 with an early project to map groundwater resources in Niger and was formalized in 2019 with a Space Act Agreement.

Shanna McClain, global partnerships manager at NASA Headquarters in Washington, said the agency was looking to “engage with partners that it hasn’t worked with in the past in the hope of achieving new ways of understanding complex human and environmental challenges.”

As the collaboration with Mercy Corps matured, McClain and Levine saw increasing possibilities for future work, as they had hoped they would.

“We didn’t just want to work with a new type of partner,” McClain said. “We wanted to see the magic that comes only from partnership.”

The formal agreement “essentially helps recognize our interest in doing this work as a shared endeavor,” she said, noting no money is changing hands. “We’re putting in an equal amount of funding and capacity.”

NASA scientists have worked with Mercy Corps from their desks and at the sites of international projects. The agency provides Earth science insights, in addition to data and analysis that Mercy Corps wouldn’t be able to produce on its own.

Together, NASA and Mercy Corps are helping to strengthen the resilience of communities around the world.

Earthrise estimates that more than half a trillion dollars has been spent on public and private satellites looking back at our own planet, primarily for military intelligence and profit-driven fields like commodity trading.

Earthrise, along with Digital Earth Africa and Mercy Corps, is repurposing this technology.

“There’s value that filters down when you’re fundamentally aware,” said Earthrise’s Hammer. “We’re leveraging the hundreds of billions of dollars of existing investment for Earth literacy.”

With Earth-observation data, people can assess how their own lands are changing and what they can do to alter the direction of the change.

The first photo of Earth rising over the horizon of another celestial body was captured on December 24, 1968, by astronauts on Apollo 8, the first crewed mission to the Moon. “That original image alone was able to shift the perspective of a lot of people,” says Earthrise Alliance CTO Dan Hammer. Credit: NASA

A legal gold mine in Ghana shows some of the effects mining has on the landscape and environment. Illegal mines, which operate without environmental oversight, are often situated close to legal ones, and the water pools are more irregular or divert to small rivers. Ghanaian officials have shut down illegal gold mines they identified using NASA satellite data and NASA-developed analysis tools. Credit: Jordi Perdigó/Global Partnership for Sustainable Development Data 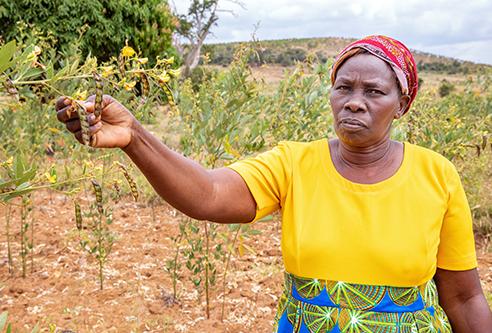 Patricia Nthenge, a farmer in Kenya who is participating in Mercy Corps’ AgriFin program, stands among her pigeon pea crop. In collaboration with NASA, AgriFin is incorporating precision satellite weather data into the information and resources it delivers to smallholder farmers in Africa. Credit: Mercy Corps

Analyzing NASA satellite imagery can give organizations a fresh perspective and important data that enables them to help more people on the ground. Credit: Africa Regional Data Cube