Harnessing the Power of the Sun

The Environmental Research Aircraft and Sensor Technology (ERAST) Alliance was created in 1994 and operated for 9 years as a NASA-sponsored coalition of 28 members from small companies, government, universities, and nonprofit organizations. ERAST’s goal was to foster development of remotely piloted aircraft technology for scientific, humanitarian, and commercial purposes. Some of the aircraft in the ERAST Alliance were intended to fly unmanned at high altitudes for days at a time, and flying for such durations required alternative sources of power that did not add weight. The most successful solution for this type of sustained flight is the lightest—solar energy. Photovoltaic cells convert sunlight directly into electricity. They are made of semi-conducting materials similar to those used in computer chips. When sunlight is absorbed, electrons are knocked loose from their atoms, allowing electricity to flow.

Pathfinder is a lightweight, remotely piloted flying wing aircraft that demonstrated the technology of applying solar cells for long-duration, high-altitude flight. Solar arrays covering most of the upper wing surface provide power for the aircraft’s electric motors, avionics, communications, and other electronic systems. Pathfinder also has a backup battery system that can provide power for between 2 and 5 hours to allow limited-duration flight after dark. It was designed, built, and operated by AeroVironment, Inc., of Monrovia, California.

On September 11, 1995, Pathfinder reached an altitude of 50,500 feet, setting a new altitude record for solar-powered aircraft. The National Aeronautic Association presented the NASA-industry team with an award for 1 of the “10 Most Memorable Record Flights” of 1995.

Pathfinder was succeeded by Helios, a remotely piloted flying wing aircraft also developed as part of ERAST. It, too, was originally designed and manufactured by AeroVironment with high-efficiency solar cell arrays across the wing, as well as navigation and emergency lights, improved avionics, and more efficient propellers.

The two primary goals of the Helios prototype development were to demonstrate sustained flight at an altitude near 100,000 feet, and to fly nonstop for at least 24 hours, including at least 14 hours above 50,000 feet. In 2001, the Helios prototype achieved the first of the two goals by sustaining flight above 96,000 feet for more than 40 minutes on a test flight near Hawaii, during which it reached an unofficial world-record altitude of 96,863 feet. On a later flight in 2003, intended to evaluate a hydrogen fuel cell system designed to provide power at night for extended flight duration, Helios became uncontrollable, broke up, and crashed into the Pacific Ocean. The mishap resulted from the inability to predict the aircraft’s increased sensitivity to atmospheric disturbances, such as turbulence, following all of the vehicle configuration changes.

SunPower Corporation, of Sunnyvale, California, created high-efficiency silicon cells for the NASA/AeroVironment Helios and Pathfinder solar-powered aircraft under the now-concluded ERAST Alliance. These photovoltaic cells were the most advanced silicon-based cells available for terrestrial or airborne applications and, over time, evolved into the mass-produced A-300. The A-300 is an efficient, high-performance, low-cost, single crystal silicon solar cell, with a unique, all back-contact design. It offers up to 50 percent more power than conventional solar cells.

SunPower first became involved with NASA when the Lawrence Livermore Laboratory, in California, transferred a solar aircraft project under the Ballistic Missile Defense Organization program to Dryden Flight Research Center. SunPower had been making high-efficiency solar concentrator cells for the laboratory. These cells quickly became the solar cells of choice for the prototype aircraft, now named Pathfinder and Helios. SunPower’s cells were selected for the program because of their high-efficiency performance and lightweight design.

Out of these experiences, SunPower gained the confidence to begin making cells on a much larger scale for terrestrial applications. At the behest of NASA, however, SunPower began to drive costs down, while retaining the high-performance efficiency of its products. Eventually, the company was able to bring costs down to be competitive with conventional cells.

At this stage, SunPower partnered with Cypress Semiconductor Corporation, of San Jose, California, which brought the capital resources and expertise in high-volume manufacturing to the business picture. The first ground installation that involved Cypress funding was at Dryden, where SunPower was able to conduct field tests and performance comparisons on its products through a small solar power demonstration site that provided power to one of Dryden’s buildings, and several dimensions of insight came from the experience. The first was the progressive evolution of cost reduction. The installation also helped SunPower to identify uses and performance advantages that would enable the company to get more firmly rooted in large-scale commercial applications.

The Dryden solar power demonstration installation includes three systems: a traditional array and two arrays with SunPower cells. One of the SunPower arrays is mounted on a structure tilted to a fixed angle, while another is installed in a “tracker” that follows the courseof the Sun during the day. Staff can review output data and dynamically compare the performance of the side-by-side systems. Together, the systems produce up to 5 kilowatts of direct current power on a sunny day, which is equivalent to powering several average California homes.

According to SunPower, typical commercial-grade solar cells are in the range of 12- to 15-percent efficient at converting sunlight to electricity, while its A-300 cells are at least 20-percent efficient in a ground application, or up to 50-percent better than the older technology. The efficiency improvement is largely due to the routing of cell electrical connections behind the cells, which was required in the original design for the solar-powered aircraft to maximize the limited space available atop the wings.

The demonstration system permits easy comparison of the advantage of tracking over the fixed-tilt array, verifying the effectiveness of models for predicting array output, and the effect of dust on the arrays. Array efficiency is monitored remotely on a computer. Currently, it is providing supplemental power to Dryden’s 7,870-square-foot Public Affairs and Commercialization building.

Long-term plans for this project could include construction of a solar “farm” at Dryden that would power up to one-third of the Center’s electrical power needs.

Consumers can also purchase these same solar cells from SunPower, as many people have elected to do. Homes across the country are now being outfitted with the modern, space-age solar power. The solar panels were even featured on the ABC television show, “Extreme Makeover:Edition,” which highlighted a team of carpenters and designers who built afor a family in Flagstaff, Arizona. The donated SunPower panels supply a significant portion of that home’s electricity needs.

Solar panels appeal to consumers, because they preserve the environment, save money on electricity bills, and insulate them from escalating energy costs. Some customers consider solar energy patriotic power: a local power source that does not rely on imported fuels.

SunPower’s solar panels have no moving parts, creating pollution-free electricity with no noise and virtually no maintenance. Furthermore, both SunPower’s all-back contact solar cells and its high-tech, high-performance solar panels perform better than most other solar panels—even in overcast or very hot conditions.

In addition to the test facility at Dryden and home-consumer uses, SunPower has recently partnered with SOLON AG, Germany’s largest solar photovoltaic module manufacturer, to open the first phase of the world’s largest solar electric plant in Bavaria near Arnstein, Germany.

Solarpark Gut Erlasse is a 12-megawatt solar electric plant located in a working agricultural field and can serve the electricity needs of thousands of customers each year. SunPower’s solar cells are used in SOLON’s “Mover” electricity generation system, designed for deployment in multi-megawatt solar power plants. Movers automatically tilt and rotate during the day to directly face the Sun at all times, similar to the concept utilized at Dryden.

By combining SunPower’s industry-leading, high-performance A-300 solar cells with the Mover’s ability to maximize daily energy production, each square foot of solar cells can generate up to double the annual energy of a fixed solar array using conventional solar cells. At Solarpark Gut Erlasse, SunPower’s cells are used only in about one-third of the Movers, but generate a higher proportion of the energy there, due to their high performance.

Now that SunPower has achieved commercial success with its mass-produced solar cells and modules, the company is working with the U.S. Department of Energy’s National Renewable Energy Laboratory on further improvements in module design to reduce costs for solar power. In addition, SunPower is working with several partner companies on specialized, mass-produced, building-integrated solar products that would leverage its A-300 cell’s attractive all-black appearance. Roof tiles that include solar cells and can be installed like regular roofing are one example. SunPower is even looking at other consumer products as a possible next step to making solar energy successful in a variety of markets.

Abstract
The Environmental Research Aircraft and Sensor Technology (ERAST) Alliance was created in 1994 and operated for 9 years as a NASA-sponsored coalition of 28 members from small companies, government, universities, and nonprofit organizations. ERAST's goal was to foster development of remotely piloted aircraft technology for scientific, humanitarian, and commercial purposes. Some of the aircraft in the ERAST Alliance were intended to fly unmanned at high altitudes for days at a time, and flying for such durations required alternative sources of power that did not add weight. Solar energy was one solution. Under the ERAST Alliance, two solar-powered aircraft, Pathfinder and Helios, were developed. SunPower Corporation created high-efficiency silicon cells for the solar-powered aircraft. These photovoltaic cells were the most advanced silicon-based cells available for terrestrial or airborne applications and, over time, evolved into the mass-produced A-300. The A-300 is an efficient, high-performance, low-cost, single crystal silicon solar cell, with a unique, all back-contact design. It offers up to 50 percent more power than conventional solar cells. The company was able to bring costs down to be competitive with conventional cells. Consumers can purchase these same solar cells from SunPower. Homes across the country are now being outfitted with the modern, space-age solar power. 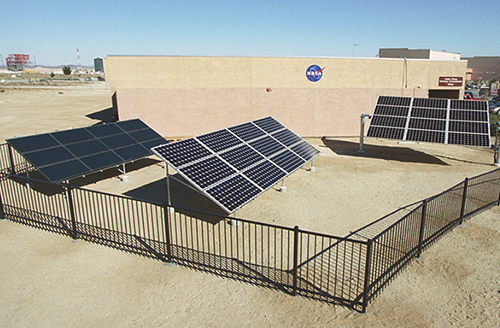 The experimental site at NASA’s Dryden Research Center consists of two fixed-angle solar arrays and one single-axis Sun-tracking array. Together they produce up to 5 kilowatts of direct current power on a sunny day, which is equivalent to powering two or three average California homes. The Sun-tracking array tilts to follow the Sun using an advanced real-time tracking device rather than normal pre-programmed mechanisms.