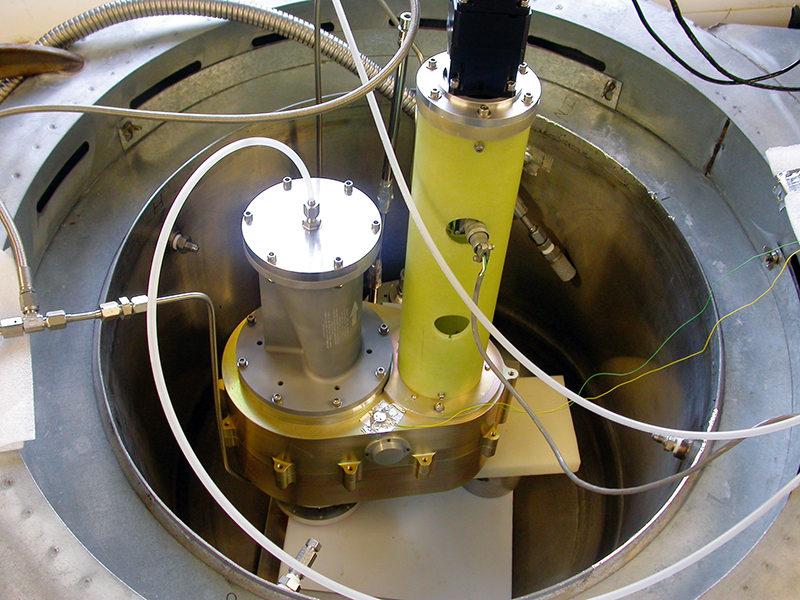 The past, present, and future of NASA launch and space travel technologies are steeped in the icy realm of cryogenics. NASA employs cryogenics, the science of generating extremely low temperatures and the behavior of materials at those temperatures, in a variety of fluid management and low-temperature applications including vehicle propulsion, high-pressure gas supply, life support equipment, food preservation and packaging, pharmaceutical manufacturing, and imaging devices. Most prominently, cryogenic liquid hydrogen fuel is used by the space shuttle as its primary means of achieving orbit.

Looking to the future, NASA’s Constellation Program, which is focused on developing next-generation launch vehicles for planned trips to the Moon, Mars, and beyond, is incorporating cryogenics into the upper stage of the Ares I crew launch vehicle, the core stage and Earth departure stage of the Ares V cargo launch vehicle, and other systems. In support of this work, NASA’s Cryogenic Fluid Management (CFM) Project is performing experimental and analytical evaluation of several types of propellant management systems to enable safe and cost-effective exploration missions. The CFM Project is led by Glenn Research Center, with support from Marshall Space Flight Center, Johnson Space Center, Ames Research Center, Kennedy Space Center, and Goddard Space Flight Center.

Cryogenic propellants have been favored for their high-energy, high-efficiency performance; however, cryogenic propellants have not been used in extended-duration space missions since they are difficult to maintain in their highly dense liquid form at the low temperatures common in space and on the Moon. Performance requirements for the Earth departure stage, as well as the lunar lander descent and ascent stages, point toward the use of cryogenic engines and propellants for missions of up to 210 days on the surface of the Moon.

CFM team research is focused on the storage, fluid distribution, liquid acquisition, and mass gauging of cold propellants. These tasks will reduce the development risk and increase the ability of advanced subsystems to store and distribute cryogenic propellants required for long-term exploration missions. CFM utilizes the development of prototype CFM hardware, the creation and use of analytical models to predict subsystem performance, and the execution of ground-based tests using liquid oxygen, liquid hydrogen, and methane to demonstrate the performance, applicability, and reliability of CFM subsystems.

Big Horn Valve Inc. (BHVI), of Sheridan, Wyoming, won a series of Small Business Innovation Research (SBIR) and Small Business Technology Transfer (STTR) contracts to explore and develop a revolutionary valve technology based on cryogenically proven Venturi Off-Set Technology (VOST). In 2001, BHVI first worked with Kennedy on an SBIR contract, “New and Innovative Valving Technology for Cryogenic Applications.” In 2003, BHVI’s proposal, “Low-Mass VOST Valve,” was selected from a field of 2,696 other entries nationwide to receive a Phase I SBIR contract, sponsored by Marshall under the Next Generation Launch Technology Program. This project developed a low-mass, high-efficiency, leak-proof cryogenic valve using composites and exotic metals, and had no stem-actuator, few moving parts, with an overall cylindrical shape. The valve geometry reduces launch vehicle complexity and facilitates assembly and testing. This valve also enhances reliability and safety, due to the inherent simplicity and leak-proof characteristic of the design.

According to principal investigator Zachary Gray, the work with NASA helped BHVI gain “ . . . a lot of experience with extreme environments. We gained a lot of contacts in the aerospace and cryogenic community. By attempting to solve NASA’s unique problems, we have greatly simplified the valve design while at the same time demonstrating that VOST worked well from half-inch diameters up to a 4-inch diameter.”

The precise control, inherent simplicity and durability, and demonstrated abilities of the VOST system afford many commercial applications, including petroleum refining, specialty chemical and high-purity pharmaceutical production, and the manufacture of industrial flow-control valves and food processing equipment. The VOST design is a magnetically actuated system in which internal magnets are used to close, open, and throttle the valve. This innovative stemless design, the only one commercially available, is emission-free with no external leakage of vapors or fluid and allows for superior fluid handling features (such as throttling, low-pressure drop, and axial envelope) within a single device structure. The VOST system has potential application in all valving environments and represents a new concept for a tradition-bound industry.

In December 2003, BHVI was selected to exhibit the VOST technology at the 2004 World’s Best Technologies Showcase, in Dallas, Texas. The 75 exhibitors selected came from the Nation’s most advanced research facilities, top universities, and entrepreneurs. The technologies displayed are considered the best of the best.

The first commercial MagVOST was installed March 16, 2006, at Windsor Energy Inc.’s methane coal gas field, east of Kaycee, Wyoming. Future applications are expected to include in-flight refueling of military aircraft and high-volume gas delivery systems such as liquefied natural gas (LNG). Big Horn is also exploring opportunities that require extreme attention to safety, such as with hydrofluoric acid in the petroleum refining industry and in the nuclear industry, and received an SBIR contract from the U.S. Navy to develop a bi-directional VOST valve for use as an isolation valve on ships.

VOST™ and MagVOST™ are trademarks of Big Horn Valve Inc. 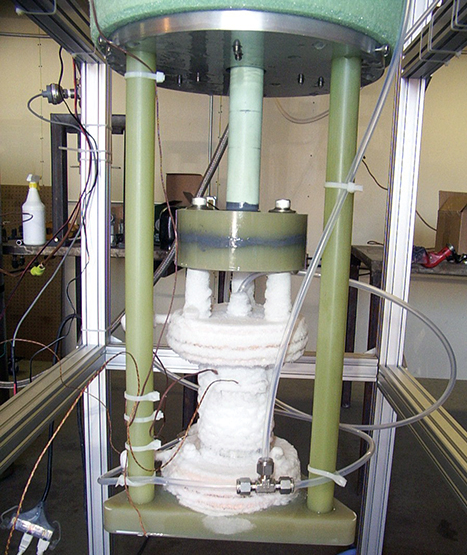 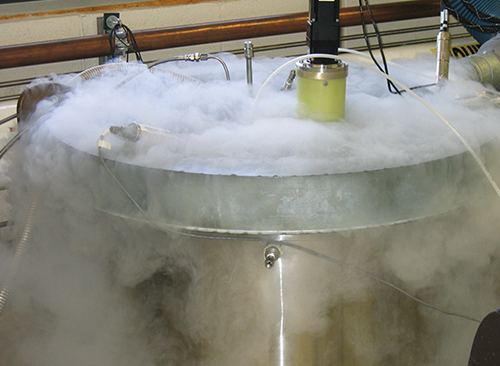 A 4-inch valve undergoing cryogenic testing in a tank as part of the SBIR work with Marshall Space Flight Center.