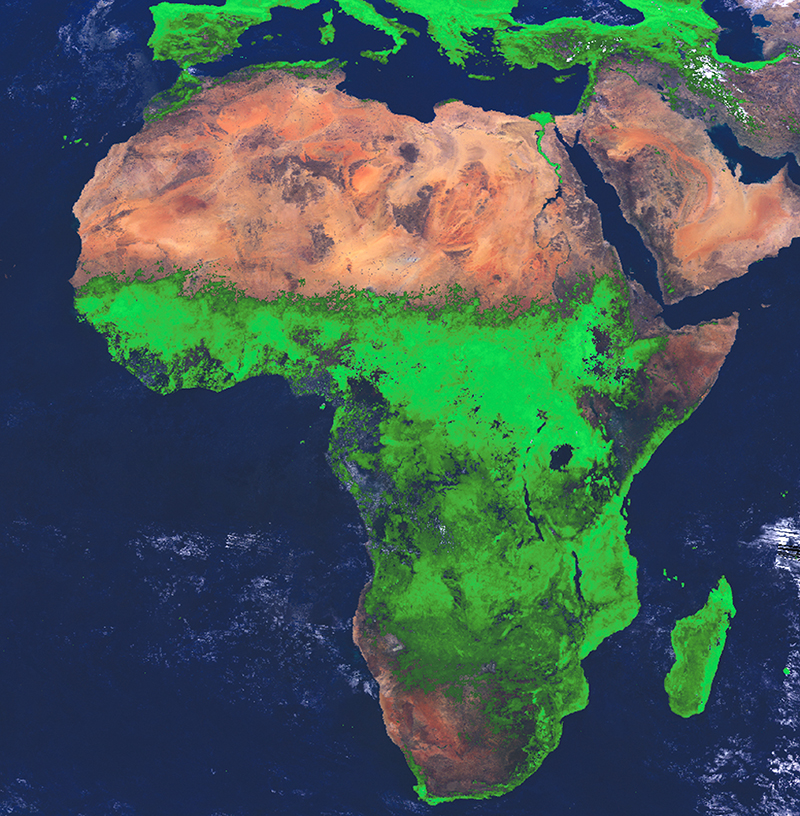 On December 7, 1972, roughly 5 hours and 6 minutes after launch, the crew of Apollo 17 took one of history’s most famous photographs. The brilliant image of the fully illuminated Earth, the African and Antarctic continents peering out from behind swirling clouds, came to be known as the “Blue Marble.” Today, Earth still sometimes goes by the Blue Marble nickname, but as the satellites comprising NASA’s Earth Observing System (EOS) scan the planet daily in ever greater resolutions, it is often the amount of green on the planet that is a focus of researchers’ attention.

Earth’s over 400,000 known plant species play essential roles in the planet’s health: They absorb carbon dioxide and release the oxygen we breathe, help manage the Earth’s temperature by absorbing and reflecting sunlight, provide food and habitats for animals, and offer building materials, medication, and sustenance for humans. As part of NASA’s efforts to study our own planet along with the universe around it, the Agency’s EOS satellites have been accumulating years of valuable data about Earth’s vegetation (not to mention its land features, oceans, and atmosphere) since the first EOS satellite launched in 1997. Among the powerful sensors used is the Moderate Resolution Imaging Spectroradiometer (MODIS) on board the NASA Terra and Aqua satellites. MODIS sweeps the entire Earth every few days, beaming back information gathered across 36 bands of visible and infrared light, yielding images that let scientists track how much of Earth is green over the course of seasons and years.

Monitoring the density and distribution of vegetation on Earth provides a means of determining everything from the impact of natural and human-induced climate change to the potential outbreak of disease. (Goddard Space Flight Center and U.S. Department of Defense researchers have determined, for example, that vegetation density can be used to pinpoint regions of heavy rainfall in Africa—regions ripe for outbreaks of rainfall-correlated diseases like mosquito-borne Rift Valley fever.)

While the Space Agency is continually seeking to upgrade the power and scope of its satellite sensors, it is also finding ways to bring that potent information-gathering capacity down to Earth. Scientists at Stennis Space Center developed one such tool that is placing some of those sensor capabilities in the hands of farmers and agricultural researchers on the ground.

In 1998, Mike Thurow, president of Plainfield, Illinois-based Spectrum Technologies Inc., met with Stennis scientists and learned about a new technology the Center had recently patented: a hand-held plant chlorophyll meter developed from Stennis work on satellite sensors. The meter measures two wavelengths of light—700 nanometers (nm) and 840 nm—to determine a plant’s chlorophyll content. Chlorophyll, the pigment found in green plants and algae that allows for the production of energy from light (photosynthesis), comes in two varieties: a and b. Chlorophyll a absorbs 700-nm light, while 840-nm light is unaffected by the chlorophyll but helps indicate the reflectiveness of a leaf’s physical surface. The NASA meter compares the ratio of 700-nm and 840-nm available light to the ratio of the same wavelengths of reflected light, arriving at a chlorophyll index value. Chlorophyll levels are strong indicators of health in green plants; the meter’s Stennis inventors demonstrated that, by detecting chlorophyll amounts, their technology could reveal plant stress caused by factors like heat, insects, disease, and lack of water or nutrients—up to 16 days before visible signs emerged.

The following year, Spectrum—a leading provider of agricultural measurement instruments in the areas of weather monitoring, nutrient management, integrated pest management, and soil properties—licensed the meter from NASA. Initially marketed as the Observer (featured in Spinoff 2001), Spectrum’s commercial chlorophyll meter featured enhancements to the NASA invention, such as a built-in ambient light sensor, dual high-power targeting lasers, a data logger, and a hardware encasement with a pistol grip for easy use.

Spectrum now offers its NASA-derived technology as the FieldScout CM 1000 meter, which the company views as a powerful nutrient management tool.

“In the world of nutrient management, nitrogen is one of the key elements for growers to manage,” says Thurow. Nitrogen is a main component of chlorophyll; plants with low chlorophyll levels are thus indicators of poor nitrogen levels in the ground. Growers can respond by providing health-boosting doses of nitrogen fertilizer.

Whereas some chlorophyll meters attach to individual leaves like a clothespin, the FieldScout meter is a point-and-shoot tool that can take measurements from individual leaves or across a plant canopy, making it a fast and accurate way to survey chlorophyll levels not only for crops like cotton or corn, but also for turf (like athletic fields and golf courses) and long grasses like wheat and rice.

“With the NASA-developed meter, from 5 to 6 feet away, you can look at a canopy of close to 7 inches in diameter,” says Thurow. “It integrates a larger sample than other meters, making it faster and easier to use.”

The FieldScout meter takes individual readings with the click of the trigger and also supplies a running average. To provide an extra level of value to the meter’s readings, the user can also log the latitude and longitude of each reading with an optional GPS device and upload this information into Spectrum’s SpecMaps Web-based software utility. SpecMaps then produces a map showing the spatial variability of chlorophyll levels based on the meter’s readings. This helps the user more accurately determine the cause of less-than-ideal readings—perhaps poor soil quality in certain areas—and employ a targeted solution, such as providing fertilizer to only those areas low in nitrogen, allowing for maximum economic yield.

Spectrum also now offers a FieldScout CM 1000 NDVI meter, which measures red (660 nm) and near-infrared (840 nm) light reflectance to calculate a Normalized Difference Vegetation Index (NDVI) for an enhanced analysis of the meter’s spectral data. NDVI was originally developed by Goddard for use measuring the health of plant life from space-based sensors.

Currently, Thurow says the meters’ main users are researchers working with small grains, turf, and rice, and Spectrum is aiming to grow a larger market base among agricultural consultants and growers. Since the NASA-derived meter was introduced by Spectrum in 2001, the company has sold 350 units, resulting in $700,000 of revenue—good numbers for a specialty product, Thurow says. He credits the product’s success to the benefits of partnership.

“I have a strong belief in partnering,” he says. “In our case, NASA had a basic, validated technology that we were able to finish developing. It gave us the opportunity to offer a product that we would never have created on our own. It’s a win-win deal.”

FieldScout® is a registered trademark of Spectrum Technologies Inc.

SpecMaps™ is a trademark of Spectrum Technologies Inc.

Abstract
Spectrum Technologies, headquartered in Plainfield, Illinois, licensed a hand-held plant chlorophyll meter developed from Stennis Space Center's research on satellite sensors. The meter measures light to determine a plant's chlorophyll content-a strong indicator of plant health. Spectrum improved the NASA technology and commercialized it as its FieldScout meters. Growers and agricultural researchers can now use the meters to determine the nutrient needs of crops like wheat, rice, cotton, and corn. The meters are also effective nutrient management tools for turf grass, making them ideal for the maintenance of golf courses and athletic fields. 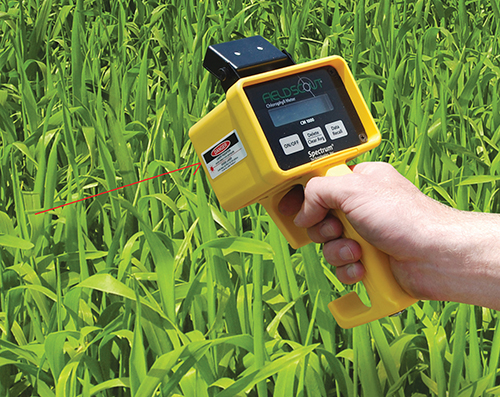 The NASA-derived, point-and-shoot FieldScout meter can take chlorophyll measurements from individual leaves or across a canopy, providing valuable information for nutrient management of crops and turf grass.