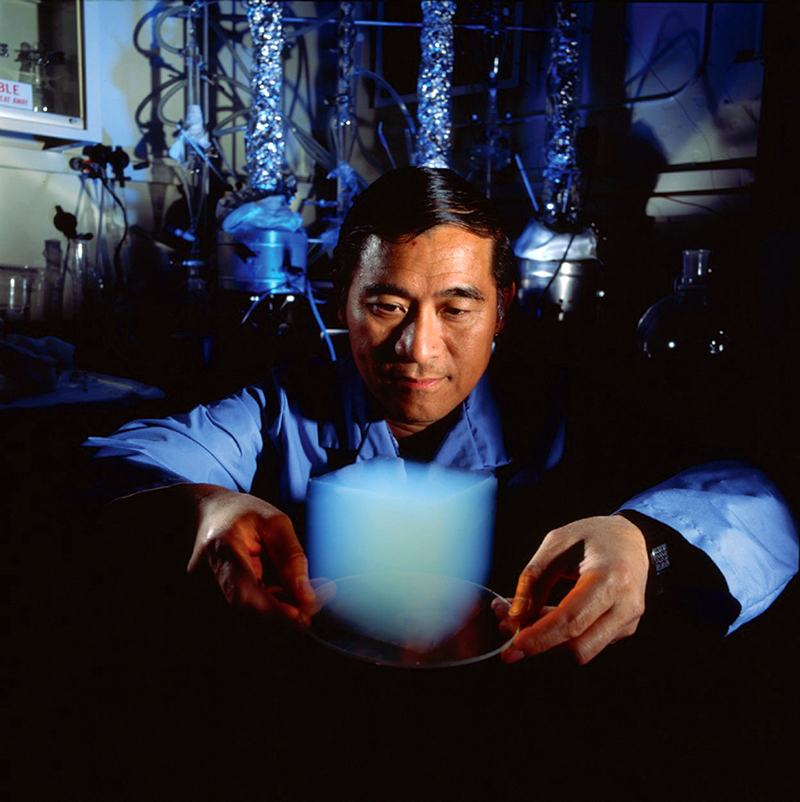 Launching the space shuttle involves an interesting paradox: While the temperatures inside the shuttle’s main engines climb higher than 6,000 °F— hot enough to boil iron—for fuel, the engines use liquid hydrogen, the second coldest liquid on Earth after liquid helium.

Maintained below 20 K (-423 °F), the liquid hydrogen is contained in the shuttle’s rust-colored external tank. The external tank also contains liquid oxygen (kept below a somewhat less chilly 90 K or -297 °F) that combines with the hydrogen to create an explosive mixture that—along with the shuttle’s two, powdered aluminum-fueled solid rocket boosters—allows the shuttle to escape Earth’s gravity.

The cryogenic temperatures of the main engines’ liquid fuel can cause ice, frost, or liquefied air to build up on the external tank and other parts of the numerous launch fueling systems, posing a possible debris risk when the ice breaks off during launch and causing difficulties in the transfer and control of these cryogenic liquid propellants. Keeping the fuel at the necessary ultra-cold temperatures while minimizing ice buildup and other safety hazards, as well as reducing the operational maintenance costs, has required NASA to explore innovative ways for providing superior thermal insulation systems. To address the challenge, the Agency turned to an insulating technology so effective that, even though it is mostly air, a thin sheet can prevent a blowtorch from igniting a match.

Aerogels were invented in 1931 and demonstrate properties that make them the most extraordinary insulating materials known; a 1-inch-thick piece of aerogel provides the same insulation as layering 15 panes of glass with air pockets in between. Derived from silica, aluminum oxide, or carbon gels using a supercritical drying process—resulting in a composition of almost 99-percent air—aerogels are the world’s lightest solid (among 15 other titles they hold in the Guinness World Records), can float indefinitely on water if treated to be hydrophobic, and can withstand extremely hot temperatures (from 1,100 °F to 3,000 °F depending on the type of aerogel) down to cryogenic levels, making this “frozen smoke” ideal for use in space. Because of its low weight and ability to withstand temperature extremes, an aerogel was even used as the space-based catcher’s mitt to trap comet particles and space dust for NASA’s Stardust mission, launched in 1999.

All of this remarkable technology’s characteristics were ideal for NASA’s purposes except one: The aerogels were extremely brittle. Through a long-term partnership between Kennedy Space Center and Aspen Aerogels Inc., of Northborough, Massachusetts, researchers developed a flexible, durable form of aerogel that NASA has since used as cryogenic insulation for space shuttle launch systems. Through Aspen Aerogels, the technology has made oil pipeline insulation, extreme weather clothing, and infrared shielding for combat helicopters.

Aspen Aerogels, which developed the “R&D 100” award-winning flexible aerogels under Small Business Innovation Research (SBIR) contracts with Kennedy, approached Acoustiblok Inc., of Tampa, Florida, to perform acoustical testing on its Spaceloft flexible aerogel to explore the potential for enhancing the aerogel’s sound-muffling capabilities. Acoustiblok is an industry leader in acoustical insulation (one-eighth of an inch of Acoustiblok, the company’s proprietary acoustical insulation, reduces more sound than 12 inches of concrete when added to a stud wall) and has previously conducted research with NASA on floor resonance—reducing sound from one floor of a building to the next. Impressed by the aerogel’s qualities, Acoustiblok considered aerogel products for enhancing energy efficiency that could take advantage of the company’s expertise in providing sound insulation for buildings and other applications.

While a great deal of energy conservation efforts focus on transportation, “Estimates are that over 50 percent of the energy in the United States is used within buildings,” says Lahnie Johnson, Acoustiblok’s president and founder. He also notes that energy consumption in buildings results in an estimated 46 percent of the Nation’s carbon emissions. Because of this, Acoustiblok saw great potential in engineering a narrow strip of flexible aerogel to be applied to wall studs in buildings to break the thermal transfer (thermal bridging) between the interior and exterior of building walls. The companies arranged for Acoustiblok to take over the production and marketing of this aerogel application.

Thermal bridging is an acute problem when it comes to insulating buildings, says Johnson. Over 30 percent of the energy used for temperature control in buildings escapes through walls, more than through the floor, windows, or roof, which is why Johnson foresees a significant impact from his company’s aerogel product: Thermablok.

“We see Thermablok as having incredible market potential and providing a benefit to people all over the world,” he says.

Manufactured by Acoustiblok, Thermablok is a thin, 3/8-inch-thick by 1½-inch-wide strip of flexible aerogel in a plastic casing with a peel-and-stick adhesive backing. The strips are 100-percent recyclable, comprised of more than 30-percent recycled material, and allow low-cost, low-emissions shipping due to their virtually weightless composition. According to tests conducted by the U.S. Department of Energy, a ¼-inch-thick strip of Thermablok applied to wall studs before the installation of drywall increases the wall’s insulation factor by 30 percent; a 3/8-inch-thick strip produces an increase of 42 percent. As an example, Acoustiblok notes that a typical 2,400-square-foot Midwest(16-inch, on-center stud framing; standard insulation; wood siding) outfitted with Thermablok would save over $700 annually in energy costs with an accompanying 3.9-ton reduction in carbon dioxide emissions. The strips can be easily cut to any length and applied using the adhesive backing or staples.

Johnson says Acoustiblok is currently acquiring numerous construction contracts and getting Thermablok, which is also available in sheet form, specified into public and commercial buildings. Thermablok’s hydrophobic qualities (which also render it age-resistant) make it suitable for marine applications as well. Johnson says Thermablok will see use in industrial and commercial boats and in oil rigs and refineries, where piping that is both extremely loud and extremely hot will benefit from Thermablok and Acoustiblok layered together. Lumber yards and commercial chain stores likeDepot and Lowes are expressing interest in selling the product, as well.

Acoustiblok also plans to take advantage of the popularity of its acoustical insulation in the Middle East, where privacy is highly valued, to meet the need there for superior thermal insulation. Johnson anticipates developers specifying Thermablok into mega building projects in the region.

“This is a U.S. product, a U.S. patent,” says Johnson. “It will bring significant cash flow into the U.S. while also benefiting people in other countries.”

Johnson traces Thermablok’s potential worldwide impact back to NASA research and development. “NASA is doing things that we just can’t afford to do here in free enterprise,” he says. “It’s important people realize the real benefits of NASA’s work and how it trickles down into many aspects of our world today.”

Spaceloft® is a registered trademark of Aspen Aerogels Inc.

Thermablok® and Acoustiblok® are registered trademarks of Acoustiblok Inc.

Abstract
Flexible aerogel technology developed by Aspen Aerogels, of Northborough, Massachusetts, under SBIR contracts with Kennedy Space Center is now being employed in a building insulation application by Tampa, Florida-based Acoustiblok Inc. The company's Thermablok flexible aerogel strips-easy-to-install and environmentally friendly-are applied to wall studs in buildings to break the thermal bridging between the interior and exterior walls, boosting the insulation factor by as much as 42 percent. 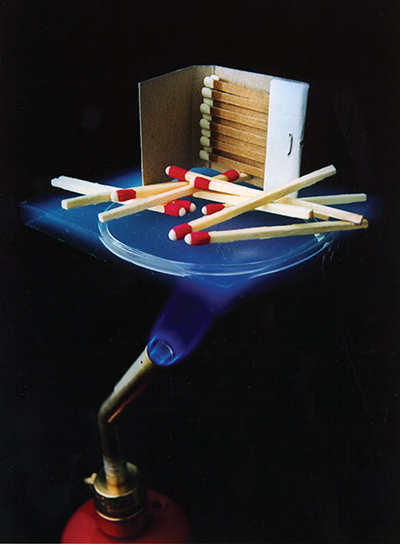 The remarkable insulating properties of aerogels have made them the focus of significant NASA research. 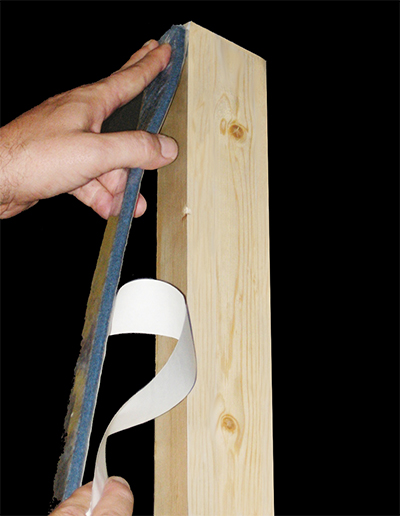 Thermablok strips are easily applied to wall studs, providing an affordable and environmentally friendly boost to a wall’s insulation factor.

Despite a ghostly appearance like a hologram, aerogels feel like Styrofoam. A NASA partnership led to flexible aerogels found in commercial applications today.