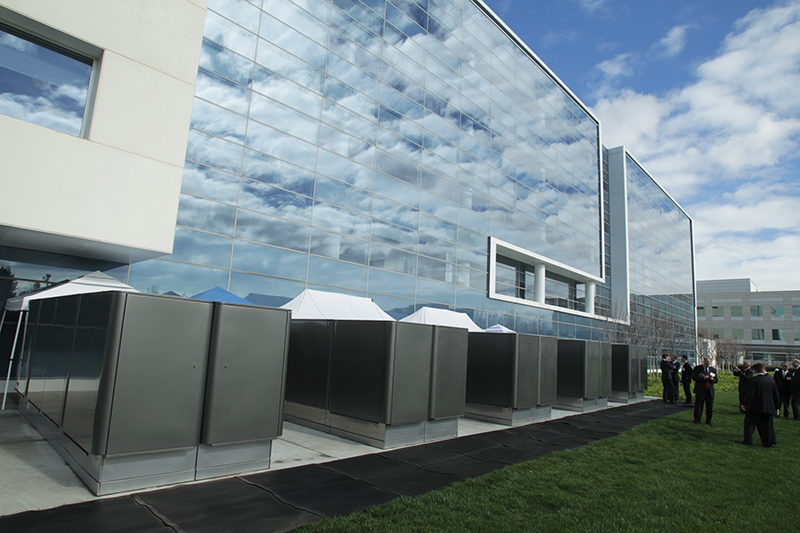 Imagine you are about to be dropped in the middle of a remote, inhospitable region—say the Kalahari Desert. What would you want to have with you on your journey back to civilization? Food and water, of course, but you can only carry so much. A truck would help, but what would you do when it runs out of gas? Any useful resources would have to be portable and—ideally—sustainable.

Astronauts on future long-term missions would face similar circumstances as those in this survivalist scenario. Consider, for example, a manned mission to explore the surface of Mars. Given the extreme distance of the journey, the high cost of carrying cargo into space, and the impossibility of restocking any supplies that run out, astronauts on Mars would need to be able to “live off the land” as much as possible—a daunting proposition given the harsh, barren Martian landscape. Not to mention the lack of breathable air. Another consideration is fuel; spacecraft might have enough fuel to get to Mars, but not enough to return. The Moon is like a day trip on one tank of gas, but Mars is a considerably greater distance.

In the course of planning and preparing for space missions, NASA engineers consistently run up against unprecedented challenges like these. Finding solutions to these challenges often requires the development of entirely new technologies. A number of these innovations—inspired by the extreme demands of the space environment—prove to be solutions for terrestrial challenges, as well. While developing a method for NASA to produce oxygen and fuel on Mars, one engineer realized the potential for the technology to generate something in high demand on Earth: energy.

K.R. Sridhar was director of the Space Technologies Laboratory at the University of Arizona when Ames Research Center asked him to develop a solution for helping sustain life on Mars. Sridhar’s team created a fuel cell device that could use solar power to split Martian water into oxygen for breathing and hydrogen for use as fuel for vehicles. Sridhar saw potential for another application, though. When the NASA Mars project ended in 2001, Sridhar’s team shifted focus to develop a commercial venture exploring the possibility of using its NASA-derived technology in reverse—creating electricity from oxygen and fuel.

On the surface, this sounds like standard hydrocarbon fuel cell technology, in which oxygen and a hydrocarbon fuel such as methanol flow into the cell where an electrolyte triggers an electrochemical reaction, producing water, carbon dioxide, and electrons. Fuel cells have provided tantalizing potential for a clean, alternative energy source since the first device was invented in 1839, and NASA has used fuel cells in nearly every mission since the 1960s. But conventional fuel cell technology features expensive, complicated systems requiring precious metals like platinum as a catalyst for the energy-producing reaction. Sridhar’s group believed it had emerged from its NASA work with innovations that, with further development, could result in an efficient, affordable fuel cell capable of supplying clean energy wherever it is needed.

In 2001, Sridhar’s team founded Ion America and opened research and development offices on the campus of the NASA Research Park at Ames Research Center. There, with financial backing from investors who provided early funding to companies like Google, Genentech, Segway, and Amazon.com, the technology progressed and began attracting attention. In 2006, the company delivered a 5-kilowatt (kW) fuel cell system to The Sim Center, a national center for computational engineering, at The University of Tennessee Chattanooga, where the technology was successfully demonstrated. Now called Bloom Energy and headquartered in Sunnyvale, California, the company this year officially unveiled its NASA-inspired technology to worldwide media fanfare.

Bloom Energy’s ES-5000 Energy Server employs the planar solid oxide fuel cell technology Sridhar’s team originally created for the NASA Mars project. At the core of the server are square ceramic fuel cells about the size of old fashioned computer floppy disks. Crafted from an inexpensive sand-like powder, each square is coated with special inks (lime-green ink on the anode side, black on the cathode side) and is capable of producing 25 watts—enough to power a light bulb. Stacking the cells—with cheap metal alloy squares in between to serve as the electrolyte catalyst—increases the energy output: a stack about the size of a loaf of bread can power an average home, and a full-size Energy Server with the footprint of a parking space can produce 100 kW, enough to power a 30,000-square-foot office building or 100 average U.S. homes.

Solid oxide fuel cells like those in Bloom’s Energy Server operate at temperatures upwards of 1,800 °F. The high temperatures, efficiently harnessed by the Bloom system’s materials and design, enable the server to use natural gas, any number of environmentally friendly biogasses created from plant waste, or methane recaptured from landfills and farms. Fuel is fed into the system along with water. The high temperatures generate steam, which mixes with the fuel to create a reformed fuel called syngas on the surface of the cell. As the syngas moves across the anode, it draws oxygen ions from the cathode, and an electrochemical reaction results in electricity, water, and only a small amount of carbon dioxide—a process that according to Bloom is about 67-percent cleaner than that of a typical coal-fired power plant when using fossil fuels and 100-percent cleaner with renewable fuels. The server can switch between fuels on the fly and does not require an external chemical reformer or the expensive precious metals, corrosive acids, or molten materials required by other conventional fuel cell systems.

The technology’s “plug and play” modular architecture allows users to generate more power by simply adding more servers, resulting in a “pay as you grow” scenario in which customers can increase their energy output as their needs increase. The Bloom Energy Server also offers the benefits of localized power generation; the servers are located on site and off the grid, providing full-time power—as opposed to intermittent sources like solar and wind—without the inefficiencies of transmission and distribution, Bloom says. Future servers may even return to the original NASA function of using electricity to generate oxygen and hydrogen. The company envisions feeding electricity from wind or solar power into its servers along with water to produce storable hydrogen and oxygen. The server could then use the stored gasses to generate electricity during cloudy, low-wind, and nighttime conditions. Stored hydrogen could even be used to provide fuel for hydrogen-powered cars.

Bloom quietly installed its first commercial Energy Server in 2008, and since then its servers have generated more than 11 million kilowatt hours (kWh) of electricity, along with a corresponding 14-million-pound reduction in carbon dioxide emissions, which the company says is the equivalent of powering about 1,000 American homes for 1 year and planting 1 million trees. Bloom’s current customers are a who’s-who of Fortune 500 companies, including Google, eBay, Bank of America, The Coca-Cola Company, and FedEx. Bloom says its customers can expect a return on their investment from energy cost savings within 3–5 years, and eBay has already claimed more than $100,000 in savings on electricity expenses.

Sridhar believes it will be another 5 to 10 years before Bloom’s technology becomes cost-effective foruse. At that point, he sees the Bloom Energy Server as a solution for remote and underdeveloped areas in need of power. He says the company’s mission is “to make clean, reliable energy affordable to everyone in the world.”

“One in three humans lives without power,” Sridhar says. “Energy demand exceeds supply.” Just within the United States, 281 gigawatts of new generating capacity—the output of 937 new 300-megawatt power plants—will be necessary by 2025 to meet national energy demands, according to the U.S. Energy Information Administration. The Bloom Energy Server may soon offer an environmentally sound option for meeting that challenge, a solution derived from the demands of space exploration.

“NASA is a tremendous environment for encouraging innovation,” says Sridhar. “It’s all about solving problems that are seemingly unsolvable. After realizing we could make oxygen on Mars, making electrons on Earth seemed far less daunting. We’re grateful to NASA for giving us a challenge with serendipitous impact for mankind.”

Energy Server™ is a trademark of Bloom Energy. 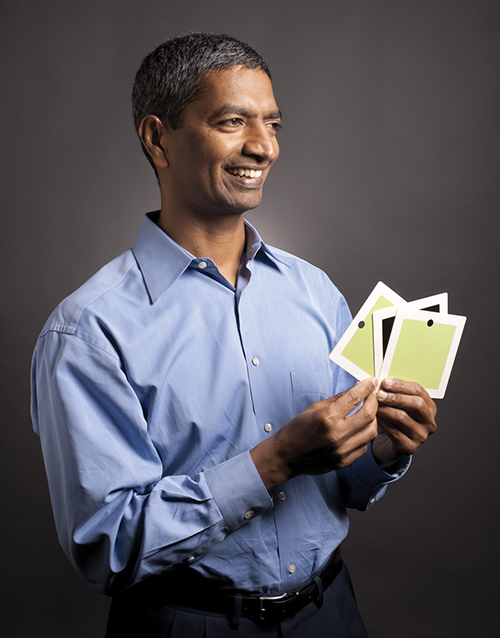 Each of Bloom Energy’s fuel cells, such as those held by company CEO K.R. Sridhar above, can produce 25 watts—enough to power a light bulb. The cells can be stacked to increase the power output. The lime-green coating is the anode side; the black coating is the cathode side.