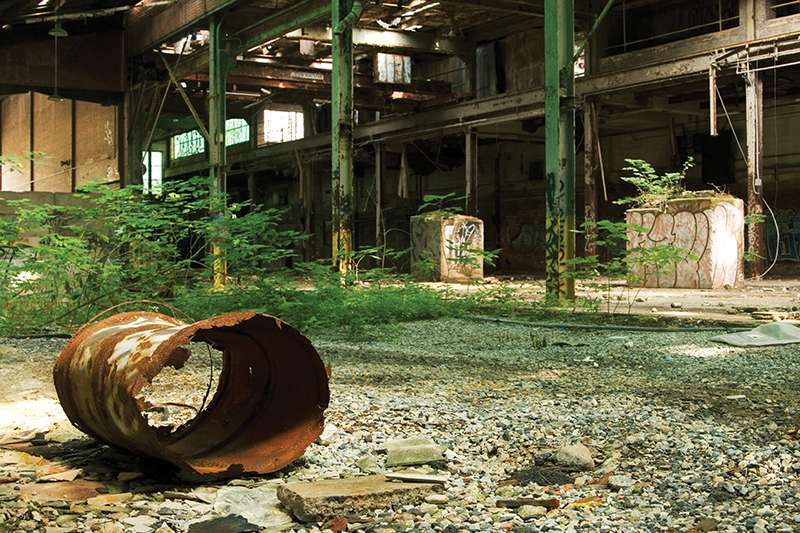 Kennedy Space Center’s launch complexes have seen a lot. They have been the starting point for every manned NASA mission, from Mercury to Gemini, through Apollo, and are now seeing the space shuttle through its final launches. Kennedy, part of the Merritt Island Wildlife Refuge, is alsoto over 1,500 different plant and animal species.

To help protect these living things, NASA works to keep the area as pristine as possible and that sometimes involves inventing new and innovative ways to clean up around the launch pads.

During the Apollo Program, NASA launched Saturn rockets from Launch Complex 34 (LC-34), and during that period—roughly 1959 to 1968—workers used chlorinated solvents to clean rocket engine components. An estimated 88,000 pounds of these chlorinated solvents, which are only slightly soluble and heavier than water, soaked into the soil and groundwater. Even after several decades, the contaminants were still in the groundwater and would have stayed even longer (restoration of the area through natural processes would have taken many decades), had NASA not set about searching for ways to remediate the area.

These solvents belong to a category of chemicals known as dense non-aqueous phase liquids (DNAPLs). DNAPLs had contaminated the areas around LC-34 to the point of near-irreparability. NASA environmental engineer Dr. Jacqueline Quinn and Dr. Kathleen Brooks Loftin, a NASA analytical chemist, partnered with researchers from the University of Central Florida’s chemistry and engineering programs to develop an innovative technology capable of remediating the area without great cost or further environmental damage. They called the new invention Emulsified Zero-Valent Iron (EZVI). It neutralizes the toxic chemicals using nano- or micro-sized iron particles in an environmentally friendly water and biodegradable oil emulsification. EZVI is injected deep into the soil, where the contaminants diffuse through the emulsion’s oil membrane and are then dechlorinated by the iron-water interior. The only byproduct of this process is non-toxic hydrocarbon, which diffuses into the groundwater.

Once the NASA-University team had EZVI working in the laboratory, it then contracted with GeoSyntec Inc., a small environmental remediation firm in Boca Raton, Florida, through the Small Business Technology Transfer (STTR) program. GeoSyntec worked at LC-34 to evaluate the real-world effectiveness of EZVI, which had previously only been laboratory tested. Groundwater testing showed that EZVI was an effective means of removing the DNAPLs. Through a follow-on contract, GeoSyntec began testing various other methods for injecting EZVI into the soil.

EZVI was recognized as a 2005 “NASA Government Invention of the Year” and 2005 “NASA Commercial Invention of the Year.” In 2006, the inventors won the Federal Laboratory Consortium’s “Award for Excellence in Technology Transfer.” In 2007, EZVI was inducted into the Space Foundation’s prestigious Space Technology Hall of Fame. According to Kevin Cook, director of Space Awareness Programs at the Space Foundation, “EZVI is an environmentally friendly technology that effectively decontaminates polluted soil and groundwater and is an outstanding example of inspired innovations we seek to induct into the Space Technology Hall of Fame.”

Since its development, numerous companies have licensed use of this technology from NASA. Several licenses are in the works, but currently six companies are using the NASA-developed EZVI groundwater remediation compound to clean up polluted areas all around the world, making it NASA’s most-licensed technology to date.

Licensees include Weston Solutions Inc., of Westchester, Pennsylvania, which provides environmental remediation services worldwide; and Toxicological and Environmental Associates, Inc., of Baton Rouge, Louisiana, which is offering the services through the southern and central United States (Spinoff 2005). Additional licensees include Huff and Huff Inc., of Oak Brook, Illinois, which offers EZVI remediation as one of its many environmental cleanup options; Starlight Environmental Group, of Panama City Beach, Florida; Remediation and Natural Attenuation Services Inc. (RNAS), of Brooklyn Center, Minnesota; and Terra Systems Inc., of Wilmington, Delaware.

The EPA estimates that there are thousands of sites around the United States contaminated with DNAPLs, including 60 to 70 percent of the sites on the Superfund National Priorities List, a comprehensive list of abandoned hazardous waste sites receiving top priority for environmental remediation. As such, EZVI was accepted into the EPA’s Superfund Innovative Technology Evaluation Program, which promotes the advancements of innovative technologies for detection and remediation of contaminated superfund-designated sites.

EZVI has proven a valuable tool in remediating these sites, and has also been used at dye, chemical, pharmaceutical, adhesive, aerosol, and paint manufacturing sites; dry cleaners; leather tanning facilities; metal cleaning and degreasing facilities; and many government-owned sites. The licensees of NASA’s EZVI technology are cleaning these contaminants from groundwater all over the country, in a wide variety of soil types, including sand and silt, clay, fractured bedrock, and residuum (soil formed in place by natural weathering).

The EZVI treatment methods generally take between 2 and 3 months, a vast improvement over traditional pump-and-treat systems, which can require decades. This reduced timeframe, in addition to the low cost of the materials and equipment, make EZVI cost-competitive with pump-and-treat, thermal treatments, and in situ chemical oxidation. In addition, some of these other methods have the potential to release the DNAPLs to previously uncontaminated areas. Since EZVI treats the contaminants in place, there is no risk for them to mobilize.

Abstract
During the Apollo Program, NASA workers used chlorinated solvents to clean rocket engine components at launch sites. These solvents, known as dense non-aqueous phase liquids, had contaminated launch facilities to the point of near-irreparability. Dr. Jacqueline Quinn and Dr. Kathleen Brooks Loftin of Kennedy Space Center partnered with researchers from the University of Central Florida's chemistry and engineering programs to develop technology capable of remediating the area without great cost or further environmental damage. They called the new invention Emulsified Zero-Valent Iron (EZVI). The groundwater remediation compound is cleaning up polluted areas all around the world and is, to date, NASA's most licensed technology. 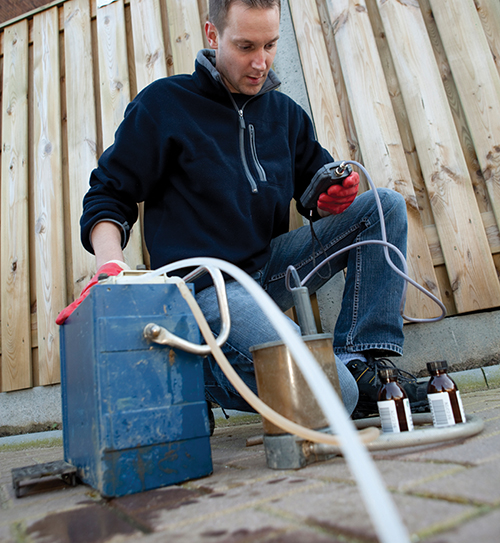 EZVI was field-tested by the U.S. Environmental Protection Agency under the Superfund Innovative Technology Evaluation Program and is now used at commercial and government sites to treat heavily contaminated areas.