When NASA researcher Stanford Hooker is in the field, he pays close attention to color. For Hooker, being in the field means being at sea. On one such research trip to the frigid waters of the Arctic, with a Coast Guard icebreaker looming nearby and the snow-crusted ice shelf a few feet away, Hooker leaned over the edge of his small boat and lowered a tethered device into the bright turquoise water—a new product devised by a NASA partner and enabled by a promising technology for oceanographers and atmospheric scientists alike.

Color is a function of light. Pure water is clear, but the variation in color observed during a visit to the beach or a flight along a coastline depends on the water’s depth and the constituents in it—how far down the light penetrates and how it is absorbed and scattered by dissolved and suspended material. Hooker cares about ocean color because of what it can reveal about the health of the ocean, and in turn, the health of our planet.

“The main thing we are interested in is the productivity of the water,” Hooker says. The seawater contains phytoplankton—microscopic plants—which are the food base for the ocean’s ecosystems. Changes in the water’s properties, whether due to natural seasonal effects or human influence, can lead to problems for delicate ecosystems such as coral reefs. Ocean color can inform researchers about the quantities and distribution of phytoplankton and other materials, providing clues as to how the world ocean is changing.

NASA’s Coastal Zone Color Scanner, launched in 1978, was the first ocean color instrument flown on a spacecraft. Since then, the Agency’s ocean color research capabilities have become increasingly sophisticated with the launch of the SeaWiFS instrument in 1997 and the twin MODIS instruments carried into orbit on NASA’s Terra (1999) and Aqua (2002) satellites. The technology provides sweeping, global information on ocean color on a scale unattainable by any other means.

One issue that arises from satellite observation, however, is that the instruments must be continuously calibrated over time to maintain the quality of the data they gather from orbit. To validate and calibrate the satellites, researchers must also gather data at sea level.

Biospherical Instruments Inc., based in San Diego, has engaged with NASA in multiple Small Business Innovation Research (SBIR) partnerships over the company’s lifetime, including the development of an instrument for studying the energy intake and photosynthetic rates of phytoplankton (Spinoff 1991).

In the early 2000s, Biospherical began working with Hooker and Goddard Space Flight Center through the SBIR program to focus on a device with the potential to improve the calibration and validation of ocean color satellites, as well as to advance other environmental research.

“We were trying to develop instrumentation that can be deployed rapidly and at the lowest cost possible to collect high-quality data and increase the baseline understanding of what these marine ecosystems look like so that, as these ecosystems evolve, we have something to compare them back to,” Hooker says. The core technology that emerged from the partnership was dubbed the “microradiometer.” A narrow tube shorter in length than a standard pencil, each microradiometer contains light and temperature sensors and was designed with lower cost, smaller size, and increased adaptability in mind. The devices can be clustered into customized arrays to meet a range of data-gathering needs.

“This innovation has proven to be a very versatile architecture that allows us to take instrument sensor assemblies configured in a variety of ways. You just plug them together, turn the system on, and you have a functioning data acquisition network,” says Biospherical CEO Rocky Booth.

The microradiometer is now at the heart of a number of environmental sensor products commercialized by Biospherical. The device Hooker used to measure light in the Arctic waters was the company’s Compact-Optical Profiling System, or C-OPS. A radiometer system on a platform with adjustable buoyancy, C-OPS descends through the water, making highly accurate measurements on the way. The system is ideal for satellite calibration and validation activities and for conducting research both in shallow waters close to land and in deep waters far out at sea.

“The ocean color community is concerned with working close to the shore so that our near coastal waters can be better understood,” explains Booth. “These instruments are particularly well-suited for making measurements in near-coastal waters.”

C-OPS can be customized to specific research requirements. Also on Hooker’s Arctic mission was Clark University researcher Karen Frey, who used a C-OPS configuration called ICE-Pro to gather measurements from boreholes drilled deep into the Arctic ice. Also employing the core microradiometer technology is Biospherical’s Advanced Multi-purpose USB Radiometer, or AMOUR. A high-speed radiometer that can be plugged into a computer’s USB port like a mouse, AMOUR provides a uniquely versatile tool for field research.

And through a 2008 joint project with NASA, Biospherical created the only commercially available satellite vicarious calibration and algorithm validation system. Called the Optical Sensors for Planetary Radiant Energy (OSPREy) system, it employs microradiometers and other instruments on multiple platforms to gather a comprehensive array of oceanic and atmospheric information to compare to satellite data.

The adaptability of the company’s spinoff technology benefits both scientists and taxpayers, says Hooker.

“We are able to apply this technology to multiple disciplines,” he says. “If you can serve two scientific communities with one instrument, you have savings.”

An additional benefit of the microradiometer is the fact that it is machine made. “We were able to solve a big part of the quality problem compared to prior technologies, which were all hand assembled,” Hooker says. He sees the availability of technologies like Biospherical’s microradiometer as providing the means to create a baseline understanding of the rich diversity of ocean ecosystems around the world, many of which are unique.

Biospherical has had substantial commercial success with its spinoff innovations, with significant export sales to researchers in countries ranging from Poland to Canada and China. The company has received more than $2 million in contracts as a result of its NASA work.

“Almost every SBIR program we have had has been very successful in returning many times more dollars in sales than went into the development,” Booth says.

Most recently, Biospherical adapted its microradiometers to fly in aircraft, conducting atmospheric research in partnership with NASA’s Ames Research Center and demonstrating that the limits of its NASA-derived technology have yet to be reached.

“As we hear about global climate change, we know that many of the unanswered questions have to do with properties of the atmosphere,” says Booth. “We are eagerly working to adapt this technology to make measurements that have not been made before.” 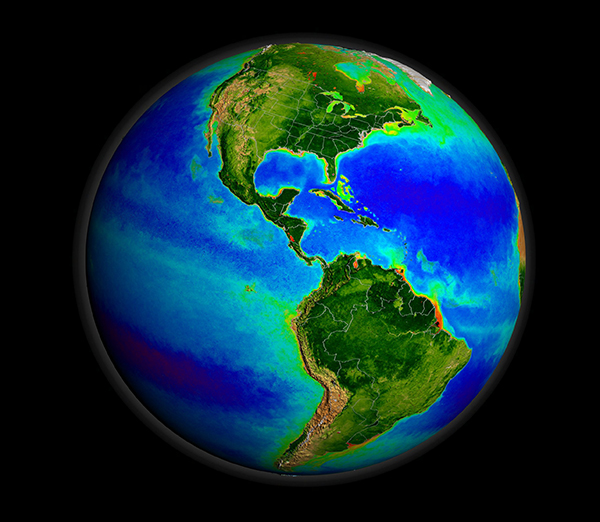 The SeaWiFS instrument has been collecting ocean data since 1997. By monitoring the color of reflected light via satellite, scientists can determine how successfully plant life is photosynthesizing. This image represents nearly a decade’s worth of data taken by the SeaWiFS instrument, showing the abundance of life in the sea. 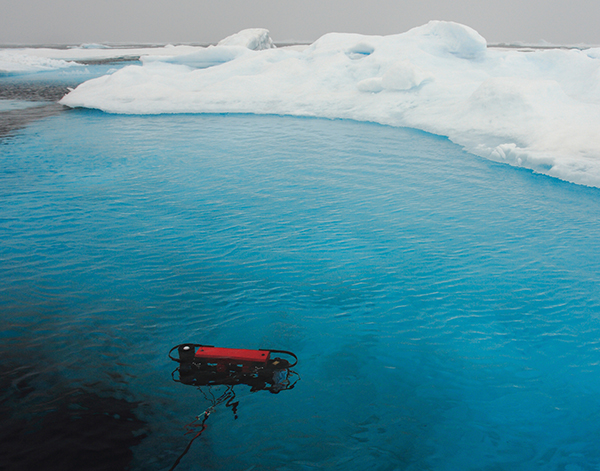 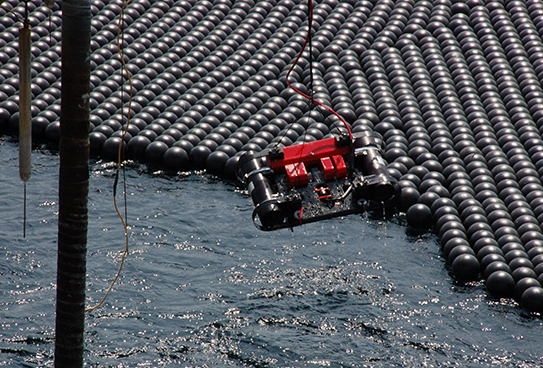 Here a C-OPS system is retrieved from the Los Angeles Reservoir, where it was measuring the penetration of light under a floating layer of black balls. The balls are intended to block light entering the water, thus hampering the growth of algae and reducing the need to chemically treat the water.

Joining Hooker on his Arctic mission, Clark University researcher Karen Frey used a C-OPS system designed for lowering into boreholes in the ice. One of the key benefits of the spinoff technology is its versatility, allowing for the creation of customized arrays for a variety of research needs.