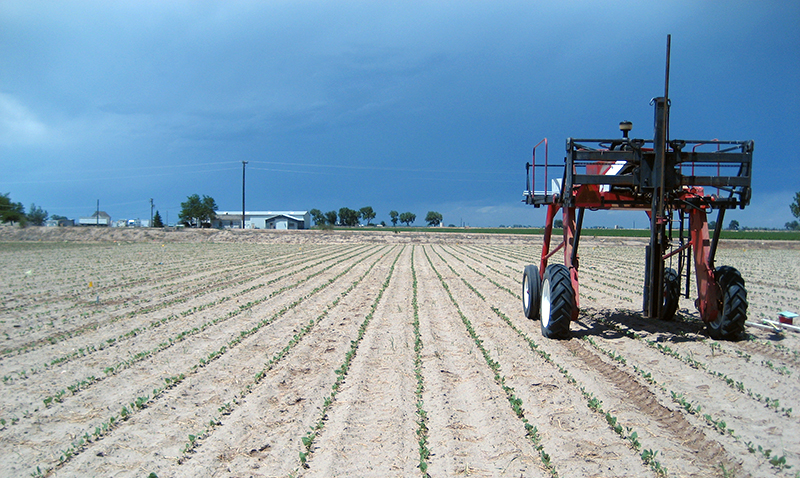 Long-term human spaceflight means long-term menu planning. Since every pound of cargo comes with a steep price tag, NASA has long researched technologies and techniques to allow astronauts to grow their own food, both on the journey and in some cases at their destination. Sustainable food technologies designed for space have resulted in spinoffs that improve the nutrition, safety, and durability of food on Earth.

There are of course tradeoffs involved in making astronauts part-time farmers. Any time spent tending plants is time that can’t be spent elsewhere: collecting data, exploring, performing routine maintenance, or sleeping. And as scarce as time is for astronauts, resources are even more limited. It is highly practical, therefore, to ensure that farming in space is as automated and precise as possible.

In the early 2000s, a NASA cooperative agreement for developing hardware for biological experiments in space was made available to Hans Seelig, at the time a PhD student at the University of Colorado Boulder and an employee of BioServe Space Technologies, a nonprofit, NASA-sponsored research partnership center located at the university and at the time connected to the Space Product Development Office at Marshall Space Flight Center. As part of his research, Seelig studied the relationship between plant leaf rigidity and its water content, and whether such data could be directly measured using sensors. “No device was available that could measure leaf thickness continually, so I built a prototype sensor that measured thickness by way of electrical pulses,” he says.

Seelig hypothesized that sensor-based watering could eliminate a significant amount of guesswork in farming and free up time and resources that could be applied elsewhere. “Astronauts are not supposed to spend their days weeding, watering, and the like, so we wanted to investigate technologies that would make a closed ecological life support system more efficient.”

Following the cooperative agreement, Seelig looked to secure additional funding to move the technology forward. For help, he turned to Richard Stoner, an entrepreneur, inventor, and plant researcher who had partnered with BioServe in the past. Stoner’s previous NASA-related projects included an organic biopesticide suitable for space and aeroponic technology to grow plants without the use of soil (Spinoff 2006, 2008). The partnership between BioServe and Stoner’s company, Berthoud, Colorado-based AgriHouse Brands Ltd. resulted in an experiment to see whether the sensor could be used successfully to trigger automated irrigation. With the sensors, they grew healthy plants while reducing water use between 25 and 45 percent compared to traditional methods.

The next step in product development was to perform a field test on a large scale, which AgriHouse conducted in collaboration with the United States Department of Agriculture. Stoner says the test, though not terribly practical, proved effective: “We had to run thousands of feet of cable down the road and to each of the leaf sensors. It was a huge effort, but for the first time in human history, you had plants in a field telling the farmer how much water they had and when they needed more.”

Looking at the data, Stoner and his colleagues determined that the plants—irrigated using traditional methods—had actually received more water than was necessary. Stoner explains that in the West, farmers typically water their crops at certain set times throughout the growing season. “In our test, we set four watering dates, but what we discovered by looking at the data is that some rain that fell before one of those dates made the irrigation unnecessary. The plants simply didn’t need to be watered—though we couldn’t have known that without the sensors in place.”

With the technology demonstrated, AgriHouse soon after commercialized the product and now sells several models of the sensor. Currently, its primary market is researchers and scientists. “This is a new, emerging science, and it’s still in its infancy,” says Stoner. “We’ve got a long way to go, but one day farmers will be able to pick up a pack of these devices like candy from a convenience store.”

AgriHouse’s line of patented leaf sensors are thin clips, smaller than a postage stamp, that easily attach to the plant, adhering to the leaf structure without damaging the leaf or falling off in the presence of natural movements, wind, or inclement weather. The sensors transmit data (either through a wire or using radio waves) on leaf turgidity, which indicates plant water levels as well as the plant’s general health.

Right now the data is all transmitted to a user’s computer, and the system can send text messages calling attention to particular crops that need water. Stoner envisions text message alerts becoming a common tool among farmers in the future, which could be combined with precision irrigation systems to eliminate a large amount of guesswork.

Because the sensors’ primary commercial benefit is in preventing overwatering, Stoner says they would be especially useful in the West, where water is sometimes scarce and farmers rely on underground aquifers to meet their needs. “This technology has the potential to reduce water spending in agricultural applications substantially,” says Seelig, now a professor in Germany. “The importance of this becomes clear when one considers the relative scarcity of irrigation water in many places in the United States and worldwide. Imagine the reduction in consumption that would be possible if our greenhouse results were extrapolated to the rest of the world.”

The spinoff has also given Stoner an opportunity to work on the next generation of the technology with students at the Leeds School of Business at the University of Colorado Boulder. “These students are committed to finding the proper business models to make this NASA funded leaf sensor an economic reality,” he says, “and they’re very inspired by it.”

Students from the University of Colorado Colorado Springs have also partnered with AgriHouse; Mark Wickert, a professor at the university, says, “Students are happy to be contributing to the knowledge base of what NASA originally funded. They fully understand the implications of the leaf sensor technology in addressing the world’s food and fresh water problems.”

Whether or not AgriHouse’s sensors ever make it to low Earth orbit and beyond, this NASA-derived technology is likely to be employed on Earth to conserve resources, save money, and put farmers in closer contact with the crops they grow. 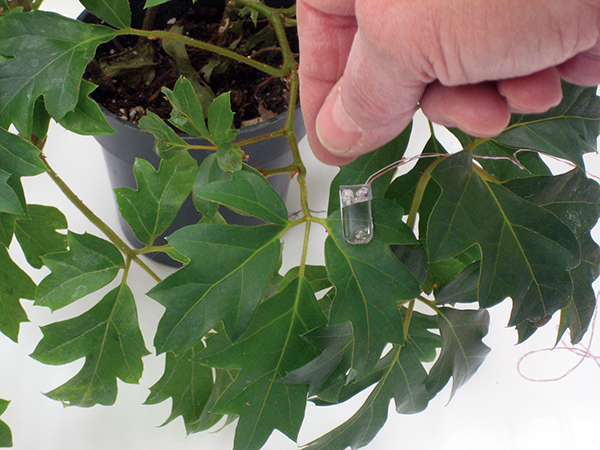 By measuring electrical pulses, AgriHouse’s sensors can determine several characteristics important to plant health. The sensors can remain attached through wind and rain while leaving the plant unharmed.

In a partnership with the United States Department of Agriculture, AgriHouse conducted the first large-scale test of its leaf sensors on the field shown here. To Richard Stoner’s surprise, the plants were actually overwatered during the test—information that only came to light thanks to the sensors. The technology could have an impact in the West, where water use is closely monitored.