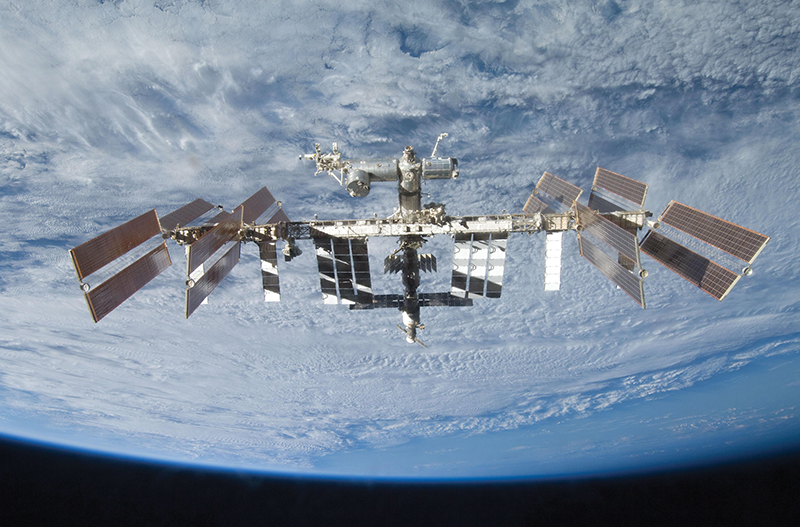 Hazy smog over cities and smoke pouring from the stacks of factories and power plants are visible reminders of the threat posed by air pollution to the environment and personal health. But air quality is often an unseen influence on our lives. Even on clear days, the air can be rife with particulate matter and other irritants that can trigger everything from minor allergies to life-threatening asthma attacks and other respiratory ailments. Indoors—where we spend as much as 90 percent of our time—pollutant levels can be 2–50 times higher than outdoors. The World Health Organization estimates that urban outdoor air pollution causes 1.3 million deaths worldwide per year, while in developing countries, indoor air pollution causes an estimated 2 million premature deaths.

Fortunately, there may be an equally invisible solution for reducing the damage air pollution causes—not only to people, but to buildings and infrastructure as well.

NASA has explored the beneficial applications of a process called photocatalysis for use both in space and on Earth. Photocatalysis is essentially the opposite of photosynthesis, the process used by plants to create energy. In photocatalysis, light energizes a mineral, triggering chemical reactions that result in the breakdown of organic matter at the molecular level, producing primarily carbon dioxide and water as byproducts.

NASA has studied the benefits of photocatalysis for purifying water during space missions, and plant growth chambers featuring photocatalytic scrubbers have flown on multiple NASA missions, using the photocatalytic process to preserve the space-grown crops by eliminating the rot-inducing chemical ethylene. (The scrubber technology resulted in a unique air purifier, featured in Spinoff 2009, now preserving produce and sanitizing operating rooms on Earth.)

Lauren Underwood, a senior research scientist at Stennis Space Center, began studying photocatalytic materials as part of a NASA partnership with the US Department of Homeland Security, which was investigating the materials for multiple applications, including protecting infrastructures against terrorism threats. From NASA’s perspective, Underwood explains, “We don’t want to introduce anything into space that could be potentially harmful. This is a future promising application of these materials—to keep surfaces not only clean, but potentially germ free.”

Intrigued by the technology’s potential, Underwood saw a way for photocatalytic materials to provide benefits for NASA on Earth, as well.

“At Stennis, we have a lot of buildings and facilities that are primarily white, and there are maintenance costs associated with keeping these buildings clean,” Underwood says. She began testing photocatalytic materials as a valid solution for reducing these maintenance costs—with an eye not only for potential NASA benefits, but for the greater public as well.

Among the technologies selected for Underwood’s research were those developed by New York City’s PURETi Inc., a company that had created a new approach to titanium dioxide-based photocatalysis. (Titanium dioxide, a common compound found in everything from paint to suntan lotion to food coloring, acts as a photocatalyst when exposed to ultraviolet light.) Common methods of incorporating titanium dioxide involve melting or mixing the compound into building materials, or applying it with solvent-based carriers like paint. With these methods, however, the nanoparticles of titanium dioxide clump together, reducing their exposed surface area and thus their exposure to light. Much of the compound ends up buried in the building material, providing no benefit.

PURETi (pronounced “purity”) devised a liquid-based method of growing nanocrystals of highly photoactive titanium dioxide, which are suspended in a highly adhesive and durable water-based solution. To study the effectiveness of the technology, Underwood applied PURETi’s solution to building surfaces at Stennis and monitored any changes through standard photography as well as remote sensing technology that measured the surfaces’ spectral reflectance—how much they reflect light.

“Not only did the photographs show that the coated surfaces maintained the clean, white state seen when they were initially painted, from an analytical perspective, it was also demonstrated that the surfaces that were photocatalytically coated maintained higher reflectance values, when compared to the uncoated surfaces,” Underwood says, implying that there is less dirt build up on the photocatalytically treated surfaces. “I was very pleased with the outcome. It’s exciting that there is a nontoxic mechanism to keep buildings clean and at the same time reduce maintenance costs, energy costs, and the use of harsh chemicals.”

Through its participation in Underwood’s research, PURETi became a NASA Dual Use Technology partner, a cost-sharing collaboration aimed at the development of products that meet both NASA and commercial needs.

PURETi now offers a range of nontoxic, environmentally sound commercial photocatalytic formulations designed to transform nearly any surface—from buildings to textiles to glass—into a self-cleaning air purifier. One spray application of the photocatalytic solution breaks down organic pollutants, keeps surfaces clear of grime and mold, and purifies surrounding air for at least 3 years.

When applied to outdoor surfaces such as building facades, these proprietary photocatalytic coatings provide extensive savings by reducing maintenance by more than 50 percent and typically offering a return on investment in less than 2 years. Indoors, the technology eliminates odors and creates hospital-grade air quality, with an 85 percent reduction in the dangerous volatile organic compounds emitted from some paints, new furniture and carpets, and photocopy machines and other office equipment.

PURETi’s innovation is now being applied by manufacturers of textiles, porcelain tiles, andfurnishings, with expectations to expand into the glass, precast concrete, and roofing membrane industries. Schools, hotels, factories, and even coffee shops and pet stores are exploring the use of these photocataltyic coatings to improve air quality and eliminate odors. Studies are underway to evaluate the benefits of PURETi applied to the inside of animal barns; previous research indicates that livestock breathing cleaner air grow faster with less food and require less need for antibiotics and steroids. Roads coated with PURETi act as effective depolluters, according to university studies.

A number of projects are also testing the ability of PURETi’s solutions to keep solar panels clean for longer, improving their efficiency. The company even collaborated with an architectural firm to transform the firm’s massive modern art sculpture—called Wendy and on display at the Museum of Modern Art’s Queens, New York, campus in 2012—into perhaps the world’s most unusual air purifier.

“The applications are virtually endless,” says Glen Finkel, PURETi’s president. “There is no surface that light can reach that PURETi can’t enhance.”

While photocatalysis is well known in Japan and Europe, PURETi’s mission, Finkel says, is to gain traction for its unique version of the technology as a real answer to air quality issues in the United States. With the help of its NASA collaboration, PURETi is seeing ongoing returns on its efforts. The company’s technology has won multiple awards, including the Popular Science Green Tech 2011 Innovative Product of the Year and the Material of the Year Award from Material ConneXions. One of the company’s customers, the Asthma and Allergy Prevention Company, recently received Class II Medical Device approval from the Federal Drug Administration for its protocol—centered on PURETi’s technology—that creates hospital-grade pure air environments in homes to prevent respiratory problems for cystic fibrosis patients. And a Yale University team is set to study PURETi as a means for enhancing infection control in rural health clinics in developing countries.

“We all love innovation,” Finkel says. “But you can only have innovation if someone has the guts to go first. We will forever be indebted to NASA for taking us seriously, for engaging with us as a Dual Use Technology partner. We have this technology that sounds too good to be true. Our challenge is to raise awareness in a credible way, and the involvement with NASA lends support to our credibility.”

At Stennis, Underwood is continuing to explore the full potential of PURETi’s technology, with an additional study set to begin using the new INFINITY at NASA Stennis Space Center as a testbed. Partnerships like the one between NASA and PURETi are a key driver of innovation, says Underwood, who says she is always looking for ways to help NASA give back to the taxpaying public.

“You can’t do everything by yourself,” she says. “It’s a combination of expertise and skill sets that helps bring things to fruition.”

INFINITY® is a registered trademark of the nonprofit 501(c)(3) Board of Directors, INFINITY Science Center Inc. 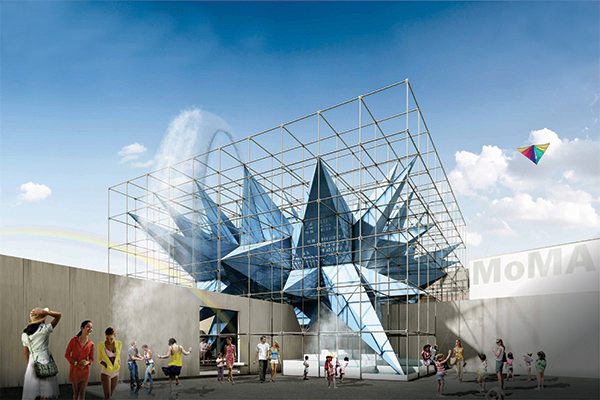 This sculpture—called Wendy and coated with PURETi’s technology—became the world’s most unusual air purifier during the summer of 2012.

PURETi’s photocatalytic solutions keep building surfaces (top, with the treated segment on the left), solar panels (center, with treated cells in the foreground), and windows (bottom, with treated windows toward the middle) free of grime—reducing maintenance costs, increasing efficiency, and providing all of these surfaces with air purifying capabilities. 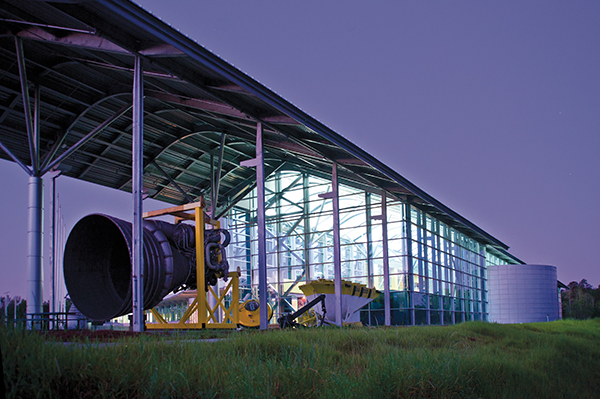 Stennis Space Center’s new INFINITY Science Center not only inspires learning in the science, technology, engineering, and math disciplines, but will serve as the site of ongoing research on PURETi’s photocatalytic technologies.

NASA has explored photocatalytic technologies as a means for keeping space environments such as the International Space Station clean.