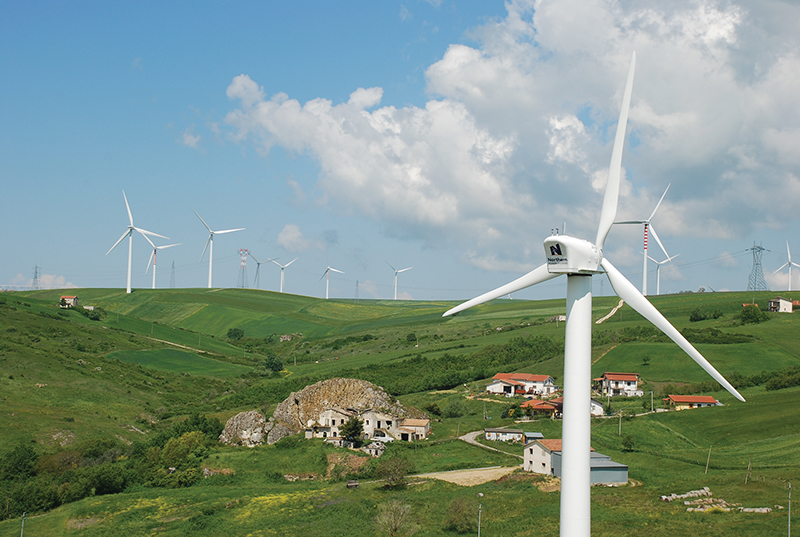 “It all started with ecological life support systems for exploration,” says David Bubenheim, a senior research scientist at NASA’s Ames Research Center. Sometimes referred to as regenerative life support systems, the concept includes an enclosed self-sufficient habitat that can independently support life for years on end. Such a system aims not only to produce its own food and water but to purify air and convert waste into useful byproducts.

In the early 1990s, NASA was planning for an extended stay on Mars, and Bubenheim and his Ames colleagues were concentrating efforts on creating a complete ecological system to sustain human crewmembers during their time on the Red Planet.

“The main barrier to developing such a system,” he says, “is energy.” Mars has no power plants, and a regenerative system requires equipment that runs on electricity to do everything from regulating humidity in the atmosphere to monitoring the quality of recycled water.

The Ames group started looking at maximizing energy use efficiency and alternative methods to make power on a planet that is millions of miles away from Earth. They turned to a hybrid concept combining two renewable sources: wind and solar power technologies. Large surface temperature swings on Mars produce windy conditions; extreme examples are the frequent dust storms that can block nearly all sunlight. “When there’s a dust storm and the wind is blowing, the wind system could be the dominant power source. When the wind is not blowing and the sun is shining on the surface, photovoltaics could be the dominant source,” says Bubenheim.

To develop and test the wind power technology, Ames turned to a remote, harsh environment here on Earth: the South Pole. “The South Pole was a really good analog for Mars,” says Bubenheim. “The technology features for establishing a human habitat on Mars are very similar to the features needed to make something work at the South Pole.”

Around the same time that NASA started investigating energy technologies for the Red Planet, the National Science Foundation (NSF) was working on a redesign of their station at the South Pole. To power its operations, NSF uses fuel that it flies to the remote location, but the Foundation recognized the benefits of also using onsite renewable energy technologies.

“In the winter they have small crews and their power requirements are less,” says Bubenheim. “In the summers, they bring in larger groups and photovoltaics could supply the necessary additional power. Using renewable energy technology could be a way of reducing the amount of fuel they have to fly in.”

To advance wind turbine technology to meet the requirements of extremely harsh environments like that on Mars, Ames partnered with NSF and the Department of Energy. “It was clear that a lot of the same features were also desirable for the cold regions of the Earth,” says Bubenheim. “NASA took the leadership on the team because we had the longest-term technology—a Mars turbine.”

Years before, NSF had worked with a company called Northern Power Systems (NPS), based in Barre, Vermont, to deploy a 3-kilowatt wind turbine on Black Island off the coast of Antarctica. The main purpose of this turbine was to power communications to the NSF’s South Pole station. In 1993, Ames awarded the same company a Small Business Innovation Research (SBIR) contract to construct a similar wind turbine at the South Pole.

Jonathan Lynch, the chief technology officer at NPS, says the South Pole has less wind than Black Island but is significantly colder. “It’s hard to have steels that work in those temperatures,” he says. “The cold affects the parts and everything gets extremely brittle. We looked at which materials were appropriate for flexible wires, irons, and steels, and what lubrication systems were going to work and for what temperatures over a long period of time.”

In 1997, NPS installed a 3-kilowatt turbine at the South Pole, and then began developing a 100-kilowatt turbine that could function in the same extreme conditions. The first prototypes of the larger turbine were successfully deployed in Kotzebue, Alaska and Golden, Colorado. “They were fully tested in loads to make sure they worked, and we subsequently built them in batches,” says Lynch.

By 2000, the wind turbine technology had won an R&D 100 Award from R&D Magazine, and since then, says Bubenheim, “It’s been duplicated and put in a lot of places around the globe.”

Thanks to the public-private partnership, Lynch says NPS simplified the overall concepts of the turbine’s function so it has few moving parts; improved the serviceability of the turbine by enabling access to the parts from inside the turbine’s tower; and used materials including different types of metals, insulation, and fiberglass that can withstand extreme environmental conditions over long periods of time.

“Turbines traditionally have a hard time being employed in Alaska because they would typically freeze up and not work in the winter,” says Bubenheim. “Nobody wanted to climb up on the wind turbine and work on it at 40-below zero in the dark.”

Today, the NASA-derived NPS turbine is known as the Northern Power 100, and according to the company, the turbine’s simplicity is what contributes to its durability in harsh, remote environments. “We designed a simple and elegant machine with as few moving parts as possible, to both minimize and simplify maintenance needs,” says Lynch. “We also developed remote communication technology to support a growing fleet of widely distributed machines.”

The Northern Power 100 begins generating power with winds as low as 6 mph, and each turbine produces enough energy for 25–30 homes. Over the years, NPS has adjusted the turbine’s features to make it applicable for milder climates as well, and the technology has been installed for use in a variety of places, including school and university campuses, residential developments, farms, municipalities, and businesses ranging from candy factories to greenhouses.

Over 200 Northern Power 100s are currently in operation and have accumulated 2.5 million run hours—representing a significant energy savings for customers, and a reduction in carbon emissions of 50,000 tons annually. With a customer base across more than 25 states and 4 countries and a growing sales pipeline, NPS continues to expand the market reach of its turbines.

Currently, Lynch says the largest markets for the Northern Power 100 and its newer Northern Power 60, are in the United Kingdom and Italy. The company is also finding success in the Caribbean and Alaska. “Those are isolated grids where you provide energy that is cheaper than burning diesel,” he says.

In the remote Alaskan communities of Kasigluk, Old Kasigluk, and Nunapitchuk, three of the Northern Power 100 turbines are saving $201,000 per year and 45,048 gallons of diesel fuel. The technology is especially valuable in these communities because the turbine’s design requires minimal maintenance, a particular advantage for isolated locations.

On the opposite side of the United States, a Northern Power 100 installed at McGlynn elementary and middle school complex in Medford, Massachusetts, is yielding benefits of a different kind: the turbine provides an opportunity for students and teachers to learn about renewable energy technology. In combination with NPS’s SmartView web monitoring program, the school tracks energy output, carbon-emission reductions, cost savings, and other historical data. Another installation on the East Coast, a 270-acre ski area at Burke Mountain in East Burke, Vermont, is satisfying approximately 15 percent of the mountain’s electricity needs.

While the turbine has not yet made its way to Mars, Bubenheim says the partnership between NPS and other government entities has produced data and knowledge that NASA is building on for future Mars missions. Plus, thanks to more recent NASA missions to generate new information about the surface of Mars, Bubenheim says, “Now we have much better data and we can map the wind resources better than ever before. This way, we can get a very good idea as to how useful and applicable the wind technology will be.”

In the meantime, a technology built for Mars continues to support the demand for clean energy back here on Earth. 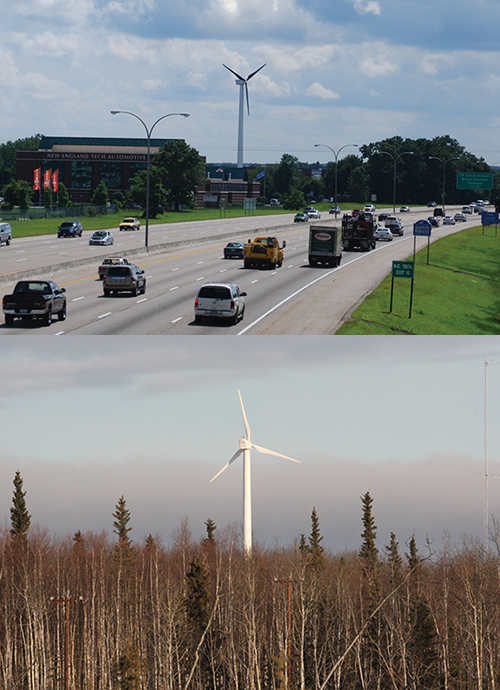 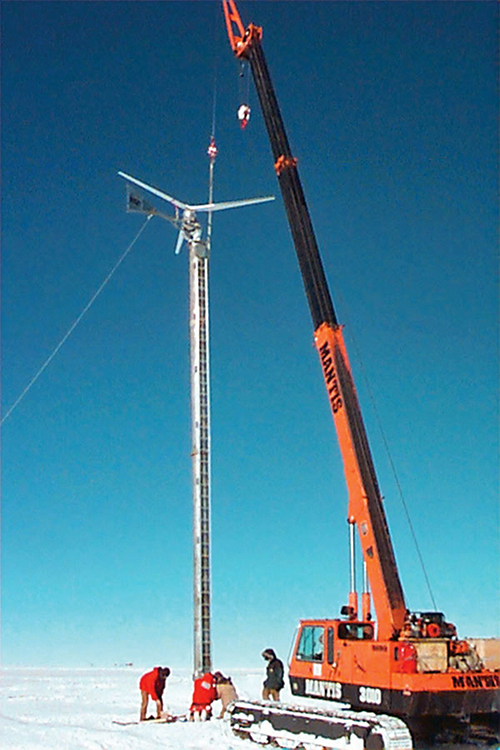 Ames Research Center provided funding for Northern Power Systems to construct a wind turbine at the South Pole, a test environment for assessing technology for use on Mars. 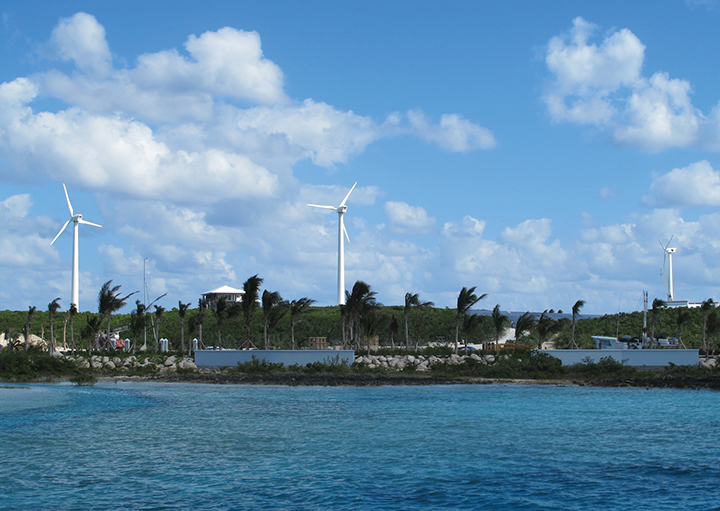