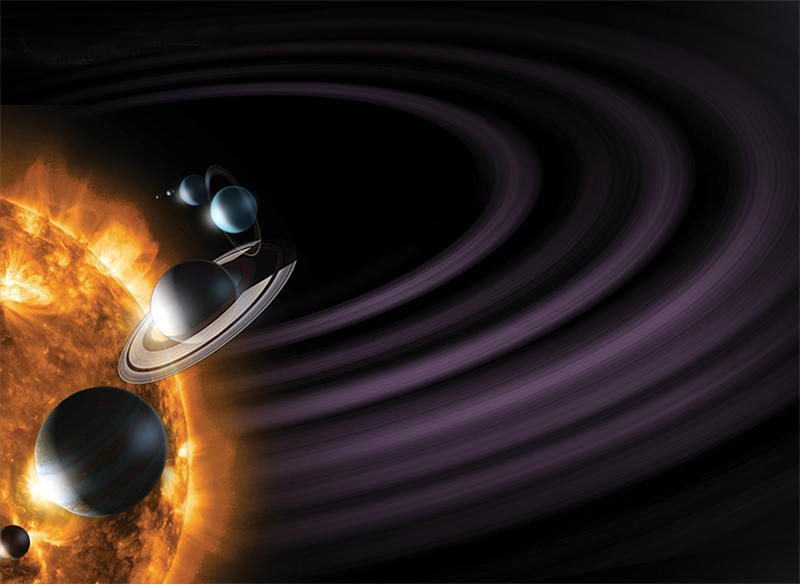 Incredible sights are being seen, thanks to the development of technology both inside and outside of NASA. With just a few clicks, NASA’s Eyes on the Earth web application lets you see what it’s like to fly around Earth with a satellite. A separate program—Eyes on the Solar System—allows you to wander through space and stop at any planet or spacecraft you see. Last but not least, NASA’s Eyes on Exoplanets provides a close-up view of the stars and planets inside the Milky Way. No longer do such sights have to come only from your imagination.

It all started in 2004 when Kevin Hussey, the manager of visualization technology applications and development at the Jet Propulsion Laboratory (JPL), was talking to a colleague who wondered, “Wouldn’t it be cool if you could ride along with a spacecraft while it’s doing its thing—especially if it is in a precarious situation or something noteworthy is going on?”

Fascinated by the idea, Hussey set out to collaborate with others at JPL to produce a prototype in the application programming interface called DirectX 9 to show the orbit insertion of Cassini, the first spacecraft to orbit Saturn, in real time. Soon after, Hussey’s team used Unity3D, a game development program for creating interactive video-game style content, to advance the visualization and incorporate interactivity. Upon completion of the Cassini Saturn interactive explorer, Hussey received requests to develop similar programs encompassing all of the spacecraft in orbit around Earth and then all of the spacecraft in the Solar System.

Nearly a decade later, there are now 12 people in Hussey’s group creating new ways of seeing what is happening in space and supporting the incredible tools that already exist. And Hussey is ecstatic about the results. “During the Mars Curiosity landing, over a 3-day period, there were approximately 1.2 million visitors to Eyes on the Solar System! During the asteroid

One of the many mind-boggling features of the programs is the capability to show real-time progress. Armed with information on the projected path of the spacecraft—what is going to happen and when—Hussey’s team uses game engine technology to show what is predicted to happen in real time. “For Curiosity, our real time visualization, which is based on the predicted telemetry, was only .6 seconds early in landing than the real thing,” says Hussey. “As people around the world were watching Curiosity touch down, it was less than a second off.”

After completing Eyes on the Earth in 2008, Hussey was asked to assist in the redesign of an administrative lobby at JPL. His first idea was to use projected imagery to create a visual experience like being in space. He began researching companies online to help his idea come to life when he found Milwaukee, Wisconsin-based The Elumenati.

Hussey contacted the company and spoke with Hilary McVicker, the director of communications at The Elumenati, who explained how the company’s domes, projection systems, and software can create immersive environments. Their patented optics fill ultra-wide screens in any shape and size with images, video, and interactive content, from fully-enclosed domes that create planetarium-like experiences to panoramas for simulating flight and exploring planetary surfaces. “Completely surrounding your audience with imagery creates a sense of presence in a virtual world that can’t be replicated on a flat screen,” says McVicker. “This makes our immersive environments uniquely effective in creating teachable moments, spaces for collaborative dialogue, and a ‘wow’ factor.”

Even though Hussey’s lobby project was cancelled, the relationship between JPL and Elumenati continued. Hussey’s team worked with the company to rewrite Eyes on the Earth and Eyes on the Solar System using Elumenati’s Omnity plugin for Unity3D, which enables interactive display of content on domes and spheres. McVicker says, “Our software performs geometry corrections so the content works on spherical displays. We worked with JPL so their code could be used in this way.”

In 2009, the company debuted the Elumenati-adapted NASA program at the annual conference of the Association of Science-Technology Centers. Attendees used a videogame controller to fly through Eyes on the Earth inside an Elumenati GeoDome. “It was a real eye-catching and engaging display that brought people over to interact with our product,” says McVicker.

After licensing the programs from JPL, Elumenati began offering its version to existing and potential customers. “More than 30 clients are using our GeoDome network for collaborative Earth and space science education in our immersive environments, and the network continues to grow. It was a perfect fit and a great way to get Eyes on the Earth and Solar System into wide use,” says McVicker.

While Elumenati shares the benefits of NASA technology, NASA also benefits from Elumenati technology. JPL became the third NASA center, behind Goddard Space Flight Center and Marshall Space Flight Center, to purchase an Elumenati GeoDome for showing educational content. In fact, Goddard brought their GeoDome to the White House lawn in 2009 as part of the International Year of Astronomy celebration.

The Elumenati officially launched the dome-enabled Eyes on the Earth and Solar System as a product in 2012. The markets for the software include schools, museums, science centers, and other institutions providing Earth and space science education. Inside the Elumenati GeoDome, people can explore data from NASA missions while surrounded by dynamic imagery. Using interactive controls, they can navigate to planets, asteroids, or satellites, and choose their speed through space and time. They can also launch “tours” curated by NASA staff.

Before the official product launch, the company included the NASA content in its Science Panorama at the grand opening of the North Carolina Museum of Natural Science’s Nature Research Center. The responses were “Ooohs” and “Ahhs,” says McVicker. “People are always excited to fly through space and see missions happening in real time. When you take this cool data and put it into a giant 28-foot screen like the one in North Carolina, you are surrounded by space, and you are driving the space ship.”

One of the company’s initial customers for the Eyes product was the School of Earth and Space Exploration at Arizona State University, in their 12-foot panoramic screen with a touchscreen interface. “Products based on real NASA data give us new dynamic tools to add to our product line,” says McVicker. “This helps our clients realize their goals, and grows our business at the same time.”

As part of the rollout, Elumenati GeoDome network clients will begin to incorporate the Eyes on the Earth and Solar System product for public engagement and professional development, starting with the 13 installations in the Minnesota Regional Planetarium Network.

“Our relationship with NASA has been extremely beneficial,” says McVicker. “Our clients leverage our expertise in creating immersive environments to tell stories based on NASA data, which really gets audiences excited about science in their lives. And hopefully, this gets younger audiences inspired to pursue careers in science in the field.”

And that leaves us in a space where we can only imagine: What will we possibly see next? 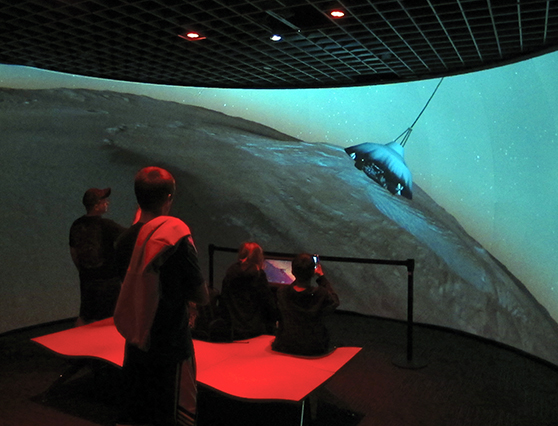 A version of Eyes on the Solar System was licensed by The Elumenati and is now available for use with the company’s panorama and dome theaters to create immersive, interactive, educational experiences.