California is an agricultural powerhouse. In 2012, its 81,500 farms and ranches produced $42.6 billion in cash receipts, the most by any state. But that abundance is threatened by what’s been called one of the worst droughts in the state’s history. For the last few years, “The Golden State” has been wilting under a dry spell that has left hundreds of thousands of acres idle and many contract farm workers jobless.

To save their most valuable crops, some growers have had to rely on pumping irrigation water from wells. In certain regions, this pumped groundwater contains higher concentrations of various minerals that can lead to salt buildup, damaging soils over the long term. The heavy reliance on pumping water from wells has also led to rapid depletion of groundwater resources in numerous regions around the state.

NASA’s satellites have captured the despair from up high. On January 18, 2014—the day after California governor Jerry Brown declared a state of emergency—NASA’s Terra satellite snapped a striking image of the Sierra Nevada mountain range.  Where thousands of square miles of white snowpack should have been, there was only bare dirt and rock. In other words, the snowpack in the Sierra Nevada was far below average. That matters because melting snow from the range provides a critical source of water for both agricultural and urban regions of the state.

But NASA is doing more than just taking pictures. By accessing high spatial-resolution satellite data, the agency has been working in collaboration with the California Department of Water Resources (CDWR) to provide water managers with more tools to plan for, and mitigate, the impacts of drought and also help the state better assist regions suffering from drought-related economic hardships.

Ever since NASA launched the first Landsat satellite in 1972, the agency (in partnership with the US Geological Survey (USGS), which currently operates the current Landsat 8 spacecraft and collects incoming data) has provided a continuous global record of Earth’s surface. Gathered by sensors that can collect measurements in multiple spectral bands, data from the program has been used to analyze a wide range of environmental changes over time, from the recession of glaciers to coral reef health, to the impacts of natural disasters.

To complement Landsat, by 2002 NASA had launched the Terra and Aqua satellites, each of which carries an instrument known as the Moderate Resolution Imaging Spectroradiometer (MODIS). MODIS provides daily global coverage and has been used to detect and monitor fires, study multiple aspects of the carbon cycle, track harmful algae blooms in the ocean, and collect aerosol measurements, among other environmental monitoring applications carried out on a global scale.

Both of these Earth-observing satellites also figure prominently in vegetation research, as they are used to measure canopy density in rainforests and to track deforestation. The wealth of plant-related data they offer, combined with NASA’s push to make both Landsat and MODIS data more utilized by the public, culminated in a partnership between the agency and the CDWR to develop new information products designed to assist farmers in calculating crop water requirements across millions of acres of irrigated farmland in California.

Since the early 1980s, the CDWR, through its California Irrigation Management Information System (CIMIS), has utilized ground-based weather stations—and, more recently, satellite data—to estimate what’s known as reference evapotranspiration (ETo): the total potential amount of water that can be transferred to the atmosphere in a given time through evaporation and plant transpiration (a plant’s release of water vapor) for a reference crop, typically a short, well-watered grass or alfalfa crop. The CDWR distributes ETo information through CIMIS as a reference to help farmers and irrigation managers determine how much water their crops need at any given period in the growing season.

As helpful as ETo data is, farmers and irrigators must still perform additional calculations to convert the ETo information into a number specific to their fields and crops. For example, the utility of ETo information is increased when paired with another piece of data called the crop coefficient. Specific to the crop type and its stage of growth, the number, when multiplied by ETo, results in a more refined measurement of evapotranspiration specific to a particular crop and field. As it turns out, in recent years NASA and the US Department of Agriculture (USDA) together were discovering that Landsat and MODIS data could be used to map vegetation conditions and, from that, derive crop coefficients.

What make that possible are the satellites’ complementary strengths, explains Forrest Melton, who is a senior scientist both at Ames Research Center’s Cooperative for Research in Earth Science and Technology and at the Division of Science and Environmental Policy at California State University, Monterey Bay. MODIS is able to provide daily observations at a resolution of about 15 to 16 acres. Landsat, while only gathering data once every eight days, is able to zoom in to a resolution as sharp as a quarter of an acre. “We found that by using them in tandem we could reliably map crop coefficients on a regular basis throughout the year,” he says.

As a result of those findings, NASA and CDWR, with funding from the American Recovery and Reinvestment Act of 2009, initiated the Satellite Irrigation Management Support (SIMS) project, whose goal, Melton says, is “to deliver a consistent reference that can help growers adjust their irrigation to match each crop’s biological demand for water.”

In the years since the collaboration was formed, web and mobile prototypes of the technology have been developed, and growers across the state are now testing them. The power of the technology, Melton says, is its ability to quantify the estimated amount of water required for specific crops at different phases of their growing cycles, and it can do this plot by plot in agricultural regions throughout the state.

“Ultimately, a grower will be able to specify a particular field or orchard, and the resulting information might include the latest satellite observation and information on the crop canopy development, crop condition, and its water requirements under well-watered conditions,” he explains.

In conjunction with the particulars of the irrigation system, soil type, and production goals, growers can then use the information from SIMS to adjust for how much water is needed. “It allows growers to use water more efficiently if they choose to use irrigation-scheduling techniques,” says Jeanine Jones, interstate resources manager and deputy drought manager for CDWR. For example, irrigation trials conducted on lettuce and broccoli crops in Salinas that were watered according to SIMS showed no reduction in yields while reducing the amount of water used by up to 33 percent relative to standard practice.

“It’s important for us to validate elements of the satellite-based procedure in controlled commercial settings and understand any limitations of the approach,” says NASA Ames and California State University, Monterey Bay senior research scientist Lee Johnson, who led the yield trials.

In addition to these water-saving technologies, the agency, in partnership with the USGS and the USDA, is also advancing tools to spot areas where water shortages have led to reductions in farmed acreage. This is being accomplished by utilizing Landsat’s quarter-acre resolution capability to track crop development and uncultivated lands in “just about every field in the Central Valley,” Melton says. “We can map the canopy conditions every eight days throughout each growing season and identify fields with bare soil or low vegetation cover, which is a very strong and clear signal, and use that to identify fields that are idle.”

That information will be used by the state to help allocate resources to nearby farmworker communities that, because of the water shortages, are facing loss of income, resulting in economic hardship. “One potential application of this will be to support California agencies in identifying counties that are likely to need extra emergency relief to support food banks for workers and their families,” Melton says.

NASA’s commitment to helping the state manage its water resources flows in still other directions. Another ongoing project involves measuring rates of land subsidence, or sinking, caused by depletion of groundwater, which can cause damage to water delivery infrastructure.

And the Airborne Snow Observatory, headed by Tom Painter at the Jet Propulsion Laboratory (JPL), uses an aircraft equipped with an imaging spectrometer and a scanning lidar system to collect snowpack depth and water measurements in the Sierra Nevada mountain range. Snowmelt supplies water to more than 25 million people and sustains nearly a million acres of farmland, which means the more accurate its estimation, the better the state’s predictive capability for both drought conditions and flood risk.

“The idea is to expand the ability to monitor the snowpack in otherwise difficult-to-get-to places and hopefully allow us to provide more accurate runoff forecasts,” Jones explains.

Another project she’s keen on is JPL’s research on the Madden-Julian Oscillation, a recurring pattern of tropical climate and weather that affects Earth’s mid-latitudes, including California. “We’re really interested in efforts to better understand it for improved climate forecasting.”

She adds, “We look forward to a long-term working relationship with NASA on all of these projects. The agency’s remote sensing-based data provides us with very useful information.”

Abstract
Ames Research Center has partnered with the California Department of Water Resources to develop satellite-based technologies to mitigate drought conditions. One project aims to help water managers adjust their irrigation to match the biological needs of each crop, and another involves monitoring areas where land is fallow so emergency relief can more quickly aid affected communities. 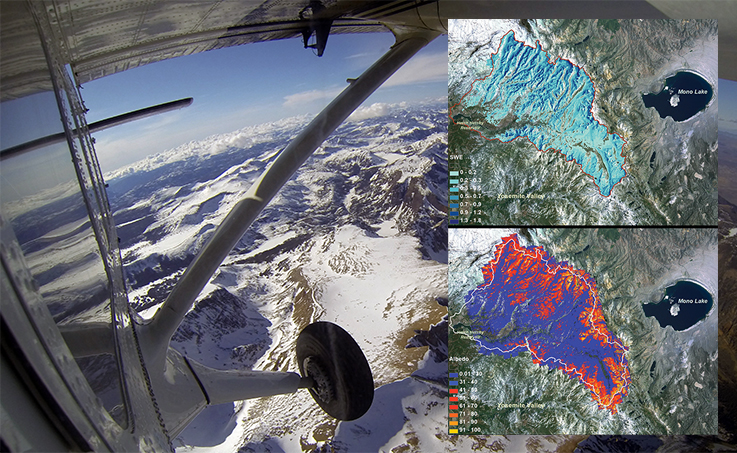 NASA’s Airborne Observatory mission, flying over Mt. Dana and Dana Plateau in the Tuolumne River Basin within Yosemite National Park in California on April 3, 2013, utilizes a Twin Otter aircraft equipped with a scanning lidar system and an imaging spectrometer to measure snow depth and snowmelt speed, respectively. The resulting data will be used to estimate how much water will flow out of the basins when the mountain snow melts. A color-coded map (inset) visualizes the results of the flight. The top image displays the amounts of water contained in the snow in the millions of cubic meters, and the bottom image projects snowmelt speed, with the blue sections indicating a faster snowmelt rate and runoff. 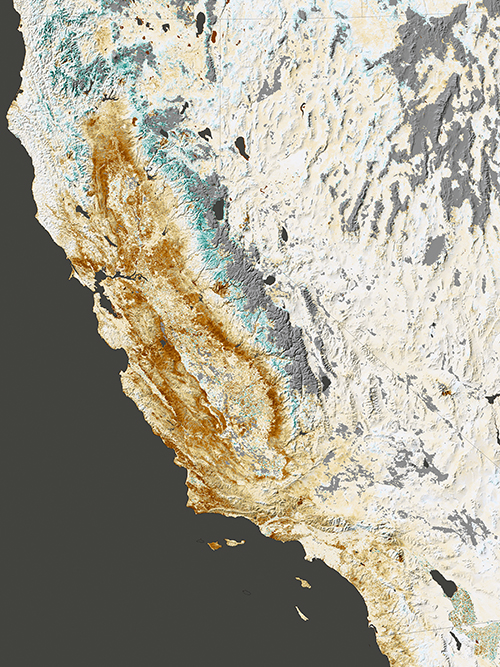 NASA’s Moderate Resolution Imaging Spectrometer (MODIS) provided the data that was used to draw up this map, which uses what’s called a Normalized Difference Vegetation Index to assess California’s crop health. Acquired on February 1, 2014, the map shows the drought’s impact on California agriculture, as the shades of brown represent areas where plant growth is drier than normal.

Folsom Lake, located at the base of the Sierra foothills in California, provides hydroelectricity and drinking water for Folsom City as well as irrigation water for the Central Valley. The before-and-after image of the lake shows the severity of the state’s current drought.