Lanny Faleide founded his Agri ImaGIS company, now called Satshot Inc., in 1994 on an idea that may have given offense to the day’s tillers of the earth: the idea that farmers didn’t really know their fields. Not, at least, in the intimate detail that a multispectral imaging satellite, having passed over their farmland hundreds of times, recording images in the visible and infrared spectra over the course of years, knew them.

His first difficulty, however, wasn’t winning converts but gathering such imagery in sufficient quantities and, especially, distributing it. The Internet was in its infancy and lacked the capability to transmit or share such huge datasets. They had to be physically sent on floppy discs or other storage devices. With few high-definition satellites in orbit, Faleide used imagery from the French company Spot Image.

But he and his young, Fargo, North Dakota-based company found a solution to the problem of distributing data in the University of Minnesota’s (UMN) Department of Forest Resources in 1999.

Five years earlier, a group of faculty and students there and in the university’s Computer Science program had won funds from Goddard Space Flight Center through NASA’s Public Access to Remote Sensing Data program to develop ForNet (short for “forest network”), a set of applications that would let the Minnesota Department of Natural Resources use satellite imagery and geospatial data regarding the state’s forests in its day-to-day business. But they had run into the same problem Faleide had.

“We went into ForNet thinking our main task would be to build these applications using existing technology, but it didn’t exist,” says Thomas Burk, who was a professor in the department at the time and oversaw the project’s development.

What the team needed was a server that could process raster and vector data and would allow data products to be placed on the Web, searched for, and accessed. “We just sort of assumed, ‘Well, certainly somebody’s going to develop that capability, and we’ll just use it to develop these solutions,’” Burk says. “But nobody did.”

A mix of forestry and computer science graduate students ended up working on the effort, which became almost entirely a software development project. What the team produced, though, was a wildly successful open source development environment known as MapServer, which is still used by thousands of active Web sites today, including Satshot’s.

Faleide discovered MapServer after approaching TechLink, an organization at Montana State University that was, at the time, funded by NASA, with the mission of transferring the Space Agency’s technology to the region’s private sector.

“He was definitely ahead of the technology and ahead of his time,” says Will Swearingen, who is still the organization’s executive director, although it is now primarily funded by the Department of Defense. “No one was using the term cloud computing, but he was thinking along those lines.”

So was the MapServer team, which had recently made their server operational and had finally started work on forestry applications. Agri ImaGIS “seemed like it would be a really good fit for extending MapServer from just forestry to agriculture in general,” Swearingen says.

“We never would have been able to do this without the MapServer core we started using back in the ’90s,” Faleide says, noting that, thanks to the NASA-funded technology, his company had an online map delivery system three years before even Google had such a thing.

Satshot has benefited from major advances in Internet and imaging technology since the turn of the millennium, as well as an increasing number of commercial imaging satellites, but the basic idea of precision agriculture through remote sensing remains more or less unchanged. Images captured with different spectral bands, particularly in the visible and near-infrared range, reveal crop density throughout a field, creating a sort of “biomass map.”

Pointing to such an image of an 80-acre field of his own, Faleide notes that greener areas indicate heavier plant production, while a yellow region represents a more sparsely vegetated hilltop. In this particular field, about 75 percent of the yield comes from just 35 to 40 percent of the area. “We want to try to increase yield in the really good areas and quit feeding too much crop input into the poorer areas,” he explains.

This means depositing a higher seed population where the soil is able to handle it, laying down more fertilizer in these areas, and, since denser populations are more prone to disease, spreading more fungicide.

By targeting resources rather than using a “blanket approach,” Faleide says, farmers not only save on resources but also reduce the amounts of chemicals and fertilizers that run off into watersheds.

The images can also reveal mistakes and problems that could be fixed in the future. Showing a shot of another field, he points out that the dark circle of vegetation fed by the farmer’s pivot irrigation system is streaked with rings of yellow, indicating a problem with the sprinkler heads. “Anything linear, straight, or in a pivot is human error,” he says. “Whenever we see a field that’s not uniform, it means there are problems. Some of them you can manage, some of them you can’t.”

An image of a 300-acre field in the Canadian province of Saskatchewan reveals straight, perpendicular lines crisscrossing the entire area, with the horizontal traces more obvious. “When this farmer saw this field, he literally jumped out of his chair,” Faleide says. The wings of the farmer’s air seeder were uneven, with part of the device set about half an inch too shallow, resulting in lines of thinner vegetation.

Since the crops are already planted and growing when the images are taken, the pictures are generally used to plan changes for the following year, Faleide says. “That you learn from your mistakes is basically the concept here.”

But with more and more private-sector satellites taking to the skies, he says, the imagery will soon be useable on more of a real-time basis, for example, to schedule irrigation. Multispectral imaging can also reveal plant health and water content, but acting on that information requires frequent, high-resolution monitoring.

Satshot currently uses imagery from a handful of private companies—RapidEye’s five satellites, Airbus’ two Pleiades orbiters, and GeoVantage’s fleet of planes—as well as the NASA-built Landsat 8 satellite. Each features different resolutions and imaging capabilities. The company already has agreements with startup Planet Labs, which is partnering with NASA to put dozens of small-scale Dove satellites into orbit with the goal of producing high-resolution imagery of the entire planet on a daily basis (see page 104). With that capability, Faleide says, a cloud-free image of any given field can be virtually guaranteed on at least a weekly basis, which is enough that the data can be used to schedule irrigation economically.

Planet Labs also has a partnership with Faleide, who has leased the company a piece of his farm in North Dakota for the installation of two large receiving stations.

Just as he was 20 years ago, though, he is still waiting for technology to catch up. Only about 5 percent of irrigation pivots in use today have the capability to adapt to schedule changes, he says. “They’ve got to get their technology up to date, and we’ve got to provide more consistency.”

The advent of smartphones and other “smart” devices has allowed the company to make its products more accessible, for example via its Landscout app, which allows mobile image analysis, and its iCue app that lets customers know every time a picture is taken of their fields and automatically analyzes images according to custom settings.

Satshot is also working with farm equipment giant John Deere to integrate computer systems on tractors with the Satshot image archive. The application will allow the machines to automatically adjust the rate of seed, fertilizer, and pesticide application based on vegetation indices, saving up to 20 percent on these resources, Faleide says, adding, “Environmentally, it’s very sound practice.”

The company is able to provide images of any field in the United States and Canada and counts among its customers thousands of individual farmers, crop consultants, agricultural dealers, and corporations employing many dealers.

“Since 14 years ago, we’ve increased our exposure by at least 10 times,” Faleide says, adding that revenues have increased four- or five-fold. “We’re growing at a pretty rapid rate now, because the precision agriculture industry has really matured in the last three or four years.”

And at the heart of the company’s technology, bringing images from orbit to end-users, is the MapServer platform, which UMN updated between 2000 and 2006 to allow data processing and image analysis as part of the TerraSIP project, also funded by NASA, and which has subsequently undergone several more iterations.

“We’ve used a tremendous amount of open source technology provided by NASA to get where we are today,” Faleide says. “The NASA research into the basic technologies has been so instrumental in bringing this to fruition.”

Minnesota’s Department of Natural Resources, the only client originally planned, also remains among the server’s users, running applications such as one that allows it to track the spread of wildfires. UMN still holds the MapServer license, but the software is part of the larger Open Source Geospatial Foundation.

Burk says he never expected the platform to become so widespread. “Since this was not our original plan, we had no aspirations of making a big deal of this or bringing in other clients,” he says, noting that the server started to take on a life of its own when his team decided to agree to requests that it be developed in an open source format, which led to contributions from developers across the world.

“It went well beyond what we ever envisioned,” Burk says. 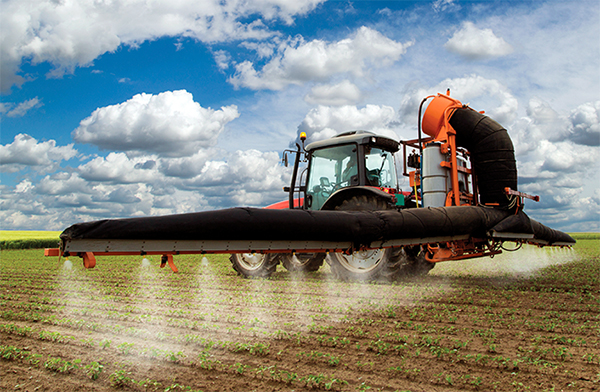 The “biomass maps” Satshot provides allow tractors to deposit more seeds, fertilizers, and pesticide in the most fertile areas of a field while allocating fewer resources to soil that can’t support dense vegetation. This targeted approach saves up to 20 percent on resources and also prevents excess fertilizers and chemicals from running off into the watershed. 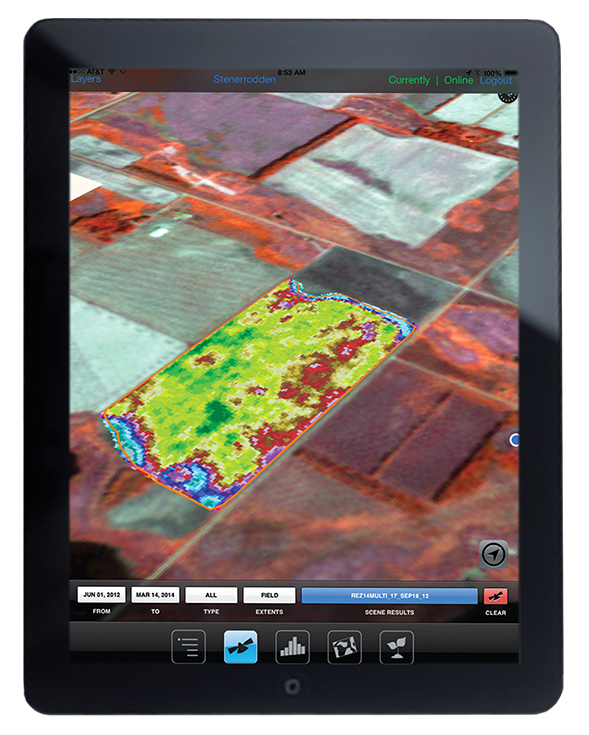 Satshot’s various apps offer satellite images of farms in a variety of spectral bands. Often, a quick visual scan can alert a farmer to a problem such as a faulty seeder or irrigation system, but the programs also offer in-depth analyses and allow a tractor to be programmed to deposit seeds and resources according to the fertility of soil in different parts of a given field. 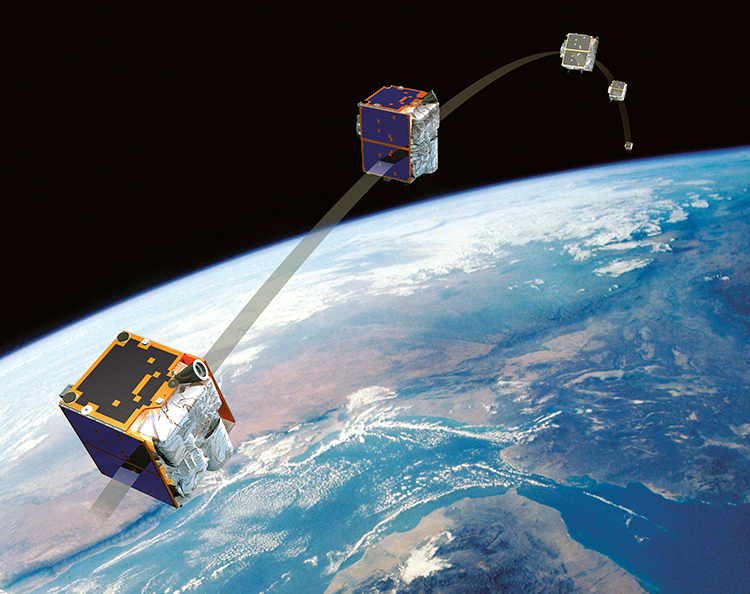 Among the various satellites that provide Satshot’s images are the five orbiters of BlackBridge’s RapidEye fleet. The company also relies on imagery from Airbus, Geovantage, Landsat 8, and Planet Labs to maintain a rich, up-to-date collection. Image courtesy of MDA Information Systems 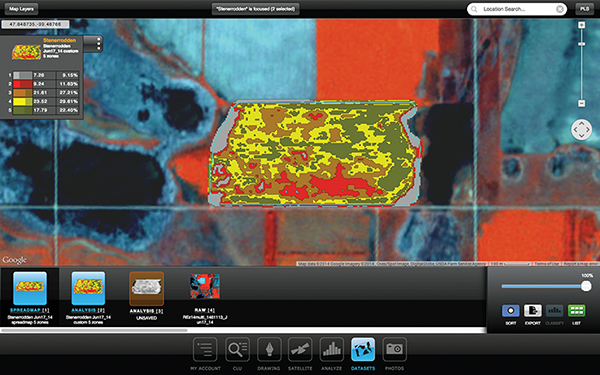 In this shot of one of Satshot President Lanny Faleide’s fields, as it appears in the company’s Mapcenter app, low vegetative cover on a hilltop shows up in red, while the densest crops appear dark green. It’s the NASA-funded MapServer platform that has allowed Satshot to host and distribute its massive collection of satellite images like this one.

With more Earth-imaging satellites taking to orbit every year, companies like Satshot can offer images of a given area that are current and loaded with information. These are a boon to farmers, as well as crop consultants and agricultural dealers.