Idaho is a nature-lover’s dream. Forests there blanket swaths of terrain, from the glassy lake regions of the northern Panhandle to the famous trout-fishing streams of the southeast. Rangelands—drier regions that areto native grasses, shrubs, woodlands, and wildlife—sprawl like carpet on the open country.

Such landscapes are beautiful, but during the summer they transform into veritable tinderboxes. On sunbaked days, a mere spark from a train car’s wheel can ignite dry grass or leaves, which, in firefighting parlance, serve as “flash fuels”—or kindling—that start a wildfire.

Periodic blazes considered natural fires are healthy for these ecosystems. For instance, low-intensity ground fires burn away litter while also releasing nutrients in the soil that nourish the seeds of the ponderosa pine, one of the Pacific Northwest’s iconic conifers. But more often than not, wildfires, the vast majority of them human-caused, wreak havoc on established habitats by destroying mature plant communities, inducing erosion, and making it possible for invasive plants to take a stranglehold over the landscape.

The Department of the Interior’s Bureau of Land Management (BLM), in addition to coordinating firefighting efforts on federally held lands, is also responsible for the post-fire restoration process that’s meant to limit the harmful fallout. Such measures include stabilizing erosive soils through the placement of berms and other features to prevent the contamination of nearby streams, replanting native grasses in severely burned areas to reestablish the natural ecosystem, and mitigating the damage caused by bulldozers used in fire suppression.

By law, before the Agency can commit to restoration work, it first must submit what’s called an Emergency Stabilization and Rehabilitation plan, or ESR, which lays out the proposed course of action along with the estimated costs. But producing such a document, and within the mandated period of 14 days after a fire is extinguished, is a tall order considering the formidable amount of work involved.

“We have to survey multiple Web sites for information on soil layers, plant species composition, burn severity mapping, and other data,” says Gregory Mann, a fire ecologist with the BLM. He adds that the act of collecting the information takes time. “When we’re dealing with large fires, it’s extremely difficult, and that’s not taking into account occasions when we have multiple fires going at the same time.”

A wildlife biologist by training and founding director of the Geographic Information Systems (GIS) Training and Research Center (TReC) at Idaho State University, Keith Weber has used various sources, including NASA satellite data, to examine wildfires’ impacts on ecosystems, with a particular focus on rangeland habitats. With funding from the Space Agency, Weber has also worked with the BLM on a number of pre-fire and long-term post-fire recovery research projects. “One of the things we hadn’t yet done was help the fire managers make better-informed decisions immediately following a fire,” he says. That was about to change.

One day, not long after NASA’s Applied Sciences Program put out a call for wildfire abatement-related proposals through its Research Opportunities in Space and Earth Science, or ROSES, announcement, Weber recollected conversations he had had with BLM staff on the sheer amount of information that needed gathering in order to prepare an ESR. They ran the gamut from endangered species habitat and elevation data to soil composition and vegetation indices.

“I began thinking of geospatial datasets 1, 2, 3, 4, 20,” Weber recalls, intimating his familiarity with the array of source material. “I said to myself—a lot of that data could be staged and prepared for them.”

As a result, Weber drew up a proposal for developing a GIS-based software program that quickly pools requested information and then presents it through a simple Web-based map interface. He formed a partnership with John Schnase, an ecologist and senior computer scientist at Goddard Space Flight Center who, in addition to his work on climate research and ecosystems, had also worked with Weber on fire-related projects. In turn, Schnase tapped his NASA colleague Mark Carroll, an expert in wildfire ecology and remote sensing technology, to join in on the effort. In 2011, after the trio was granted ROSES funding, the scientists led their respective teams in developing the software.

Following more than a year of programming and logistical work, they completed the first iteration of NASA’s Rehabilitation Capability Convergence for Ecosystem Recovery, or RECOVER system.

RECOVER utilizes Amazon Web Services’ cloud computing technologies to wrangle the requested data from a multitude of sources, whether it be the U.S. Geological Survey’s Landsat, NASA’s Moderate Resolution Imaging Spectroradiometer datasets, the U.S. Department of Agriculture’s soil surveys, or any other publicly available database available on the Web. Once compiled, they are converted into an easily understandable visual interface that’s accessible on a standard Web browser.

The system underwent its first field testing during Idaho’s exceptionally active wildfire season of 2013. Once a wildfire was contained, the BLM, the Idaho Department of Lands, or the U.S. Forest Service (which has a plan similar to the ESR called a Burned Area Emergency Response) would provide Weber with coordinates for the fire’s extent, and Weber and his students would then plug those coordinates into the cloud-based software program, which he says acts “like a cookie cutter, clipping out all of 20 layers for that spatial extent,” then stores them in a folder held in the cloud. That data was then sent back to GIS TReC at Idaho State University, where it was assembled into a RECOVER client Web map and delivered to the requesting agency through a URL link.

Today, the entire process, from request to map delivery, takes all of five minutes.

RECOVER’s speed impressed the BLM, which used the technology to prepare ESRs for five large wildfires that season. “We can get all the information in one place in a very short turnaround,” Mann says. “It can save us valuable work time, which is extremely helpful when you’re in a constant time crunch.”

But the BLM—both the staff based at incident command and the firefighters on the ground—found RECOVER useful not only for post-fire rehabilitation efforts but also for assisting in active fire containment. Knowing where fires would spread based on identifying adjacent vegetative areas, for instance, helped crews to steer safely away from potentially dangerous locales.

The software’s unexpected application in active fire management spurred Weber and his colleagues to develop smartphone- and tablet-friendly versions of the program that can be accessed with ease by firefighters in the field. What’s more, the app’s latest iteration allows fire crews to map hazards in real time using GPS technology. For example, a firefighter would be able to note the site of a weakened tree that’s at risk of toppling. The information is then available on the map interface for all users to see. “Now when their fellow firefighters are in that area, they can look at the Web map on their phones and know to avoid that tree, whereas in the past they may not have had any idea of the danger,” Mann says.

RECOVER’s feature-mapping capability will also prove useful in other ways. Consider the use of bulldozers in active fire suppression: they play an important role in clearing vulnerable areas of brush and other fuel sources to create a fire break, but they also impact the landscape. As such, dozer lines must be noted so remediation measures can be taken to restore those areas post-fire. By being able to track where the heavy machines are working in real time, fire suppression crews can utilize them in a more effective manner. Additionally, they will no longer have to go back to the field afterward to gather that data, saving time and money.

Weber points to another use for the technology that’s already being implemented: fuel reduction. During the off-season, agencies take stock of areas where wildfires are likely to spread to and take proactive measures, including carrying out controlled burns or trimming understory growth, to decrease the potential for fires. “They can use RECOVER to locate these susceptible areas and mark areas they’ve already worked on,” Mann explains.

Weber, along with Schnase and Carroll at Goddard, have received additional funding to continue their work over the next few years. Besides fine-tuning the smartphone- and tablet-supported software, which, if all goes as planned, will be fully functional for use by the BLM and the U.S. Forest Service during the upcoming wildfire season, another goal is to automate the process so that, instead of making a request to Weber, an agency can access RECOVER directly. “We’ll probably have a Web interface where you’d enter the coordinates or use your mouse to draw the fire area on a map, then just wait a few minutes for the new Web site to be created,” Schnase explains.

Another objective, given RECOVER’s early successes in Idaho, will be to expand the technology’s use by Federal agencies to the entire western United States. “We have a lot of interest from fire managers in Arizona and California, and they’ll also soon have access to the technology,” says Weber.

Mann believes the program will be well received. “I can really see this program being used nationally. It’s a good tool for land managers to use to help make the best informed decisions on the ground.”

Abstract
The Bureau of Land Management not only puts out wildfires but also restores the charred land. To help the agency draft its required restoration plans more quickly, Idaho State University wildlife biologist Keith Weber worked with Goddard Space Flight Center scientists through funding from NASA_s Research Opportunities in Space and Earth Science program to develop the Rehabilitation Capability Convergence for Ecosystem Recovery, or RECOVER software. The program has also found use in fire containment and prevention. 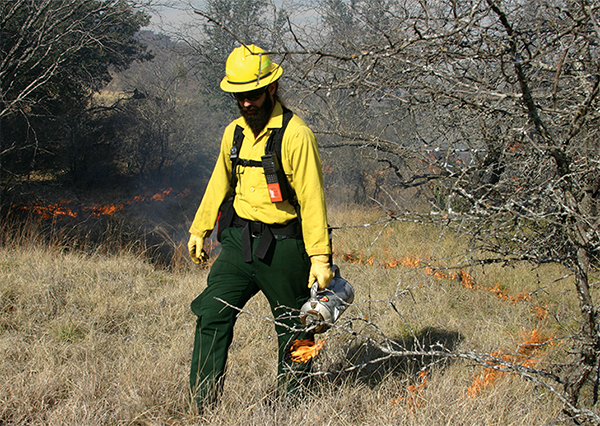 In the off-season, fire management agencies operate controlled burns and trim understory growth to reduce the potential for fires. Workers are using RECOVER to locate those vulnerable areas and then, after they’re done, mark them as completed. 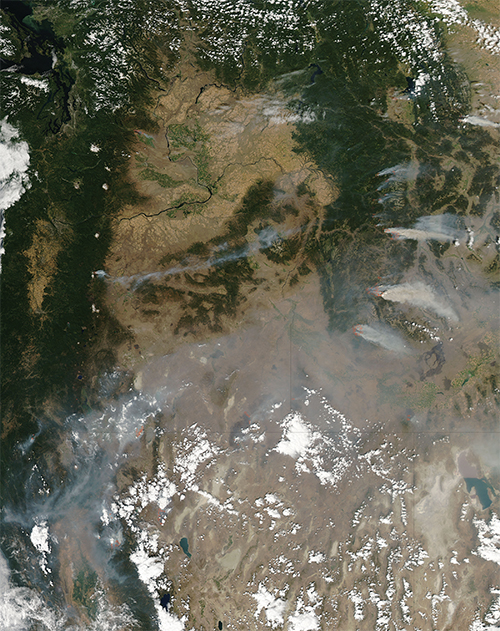 NASA’s Moderate Resolution Imaging Spectroradiometer, aboard the Aqua satellite, captured an image of multiple wildfires raging across Idaho in the summer of 2012. In addition to containing active wildfires, the state’s Bureau of Land Management (BLM) also conducts post-fire restoration work on disturbed habitats. To simplify and speed up the planning process, Keith Weber, a Geographic Information Systems expert at Idaho State University, teamed up with scientists at Goddard Space Flight Center and, with NASA funding, developed the Rehabilitation Capability Convergence for Ecosystem Recovery, or RECOVER, system.

By using RECOVER, the Idaho BLM can quickly access upwards of 20 geospatial datasets for a given area, from slopes and elevations to natives grasses and endangered wildlife, that assist with active fire containment and post-fire restoration work. Shown is a RECOVER client Web map for a wildfire that occurred in Pocatello, southeastern Idaho, in 2012. The colors represent the extent of the fire severity, or loss of organic matter, in different areas.