In a corner of Ames Research Center in California stand a pair of rather unusual buildings, where mere mortals can control magnetic fields.

The Magnetic Test Facilities, identified on a map as N-217 and N-217A, are located at the outer edge of the facility, on the southern end of San Francisco Bay. Housed in a 12 by 12-foot section of N-217 is a chamber designed for calibrating magnetic sensor systems, determining the amount of metal in a magnet, and testing the low-frequency electromagnetic radiation of small objects measuring up to 3.3 feet in any direction. Next door, in N-217A, a facility with a 20-foot coil accommodates larger objects and is capable of duplicating the strength and direction of the planet’s magnetic field as measured anywhere on Earth, in orbit, or in deep space.

“Originally, those buildings were put out there for testing space probes that had highly sensitive magnetic instruments on them,” says Robin Orans, technology partnership manager at Ames. The magnetic fields could be altered as needed by electrifying Helmholtz coils, which helped determine how objects that responded to Earth’s magnetism would fare in space.

By the end of the 1990s, however, NASA wasn’t using the buildings very often. The Agency considered tearing them down, but one engineer fought to preserve them.

Ernie Iufer, a research scientist specializing in magnetics at Ames for many years, argued that the buildings should be maintained in case NASA needed them in the future, or for outside companies that could require testing in such rare conditions.

“Ernie came to me and said these buildings are going to be torn down, all the instrumentation will be taken away,” Orans recalls. Instead of allowing that to happen, he found a possible tenant with its own special needs.

Geometrics Inc., from San Jose, California, was looking for a facility to test its magnetometers, devices used to measure magnetic fields. Iufer brought the company to the attention of Ames officials, noting that the company would agree to use the facilities on a noninterference basis: the buildings would be in use and maintained by Geometrics, but NASA would have priority if the Agency needed to conduct testing.

“The NASA buildings are instrumental to us in testing the products we manufacture,” says Ron Royal, vice president of operations for Geometrics.

Magnetometers can’t be tested in just any facility, as interference from traditional building materials, including rebar and nails, could skew test results or otherwise provide inaccurate readings. Upon learning of the facilities at Moffett Field, constructed with wood and nonaluminum nails, Geometrics leapt at the opportunity and negotiated a Space Act Agreement to lease the buildings.

Early spacecraft were found to respond to Earth’s magnetic field while in space, says Raul Mhaskar, a senior scientist at Geometrics. “When they were sent out to space, the spacecraft itself acted like a compass needle and would start wobbling.”

While NASA built N-217 and N-217A to determine how spacecraft would work in orbit and to eliminate as much “wobble” as possible, the facilities were just as adept at simulating conditions on Earth.

“The Helmholtz coils, when electrified, either add to the magnetic field or subtract from it, so you can test the full range of what you might encounter anywhere on Earth,” Royal says. Locations closer to the poles have a stronger magnetic field than those closer to the equator, for example.

Geometrics began making magnetometers in 1968, when the space race was in full swing. Since then, as technology has evolved, so too has the look of the company’s devices, previously the size of a gallon jug but now roughly the size of a soda can. Soon, the company hopes to make devices even smaller, shrunk down to a one-inch cube.

“That represents an improvement in size and power, more than a factor of 10 lower than the existing magnetometers,” Mhaskar says. “We expect this to be a revolutionary change in magnetic field testing, and we’re relying on the NASA facility for it.”

Magnetometers work by reading the magnetic signatures found in soil, water, or other substances to determine what’s there, he says. Miners might be able to determine where a large core of diamonds can be found by using a magnetometer to get an image of what’s buried underground. The diamonds themselves don’t have a magnetic signature, but the ground around them does, and the magnetometer would register an anomaly.

The devices can also be used to calibrate underground drill rigs or to find buried objects. One was used to help a police department find a car that provided important evidence in a decades-old murder trial, says Royal.

A new and increasingly important use for magnetometers can be seen in the North Sea, where wind farms are becoming a major provider of energy.

During World War II, Germany landed aircraft in the area near the North Sea and “jettisoned their bombs as they landed in the North Sea itself, along the shoreline,” Mhaskar says. “Now we have these million-dollar windmills being positioned in the same area as thousands of unexploded ordnance along the sea bottom.”

Magnetometers are being towed out into the sea by boat and are used to determine where it’s safe to install a windmill and where bomb extraction is needed, he says, based on the amount of iron found in the vicinity.

Another use for magnetometers is in the medical field, as they can be used to detect the electrical activity produced by the human heart.

“Along with the EKG signal that you typically see with electrodes, you can see the magnetic signature of the heart,” Mhaskar says. “There are lots of things that you cannot see from an EKG. The brain, for instance, also produces a tiny magnetic signature, but that is also what’s called magnetoencephalography,” used to determine long-term effects of a stroke or brain damage.

The military has an interest in magnetometers for finding IEDs or other explosive devices, as do the security and oil-drilling industries.

“All of our products are used to look under the ground or sea without having to dig it up,” Royal says. “You map the magnetic field from above, and a geophysicist makes some kind of determination about what’s below, saving time and money.”

Mhaskar says the company is using NASA’s facilities as it develops the next generation of magnetometers. “We use these buildings to make sure that the sensor has the properties we expect it to have throughout the range of operations, something we cannot test at our location in San Jose.”

The company’s next generation of magnetometers is being developed in partnership with Texas Instruments. These new, smaller machines will use silicon technology and incorporate microelectromechanical systems processes.

“Those tests will also be conducted at NASA,” he says. “That facility is critical to making sure this technology matures.”

Abstract
A pair of buildings where magnetism can be manipulated at Ames Research Center fell into disuse by the 1990s, but they piqued the interest of San Jose, California-based Geometrics Inc., which needed a test facility for its magnetometers, used to find magnetic anomalies in soil and water. The company leased the buildings through a Space Act Agreement, and its devices are now used to find buried objects and calibrate underground drill rigs 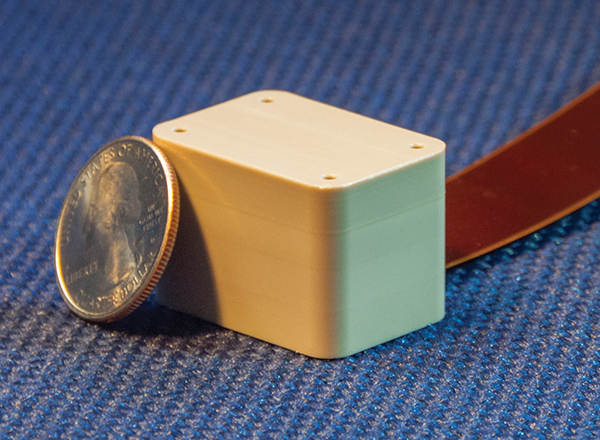 Geometrics’ micro-fabricated atomic magnetometer, a prototype of which is shown here, has been optimized for miniature deployment platforms thanks in part to the use of special buildings at NASA’s Ames Research Center. 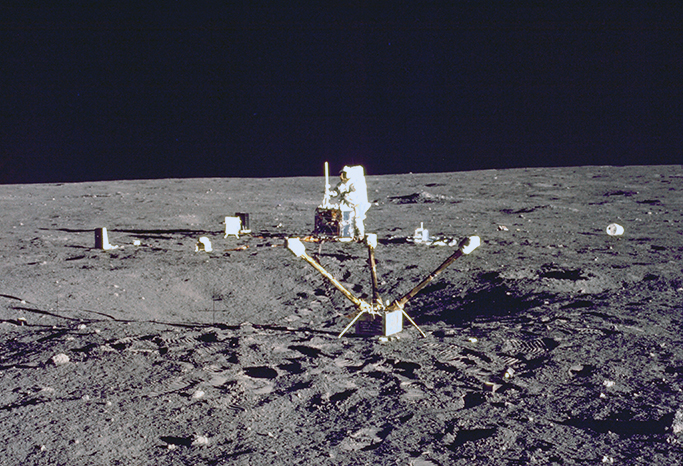 When Apollo 12 landed on the Moon, astronauts deployed a special lunarsurface magnetometer, developed at Ames Research Center, to measure magnetic fields there. 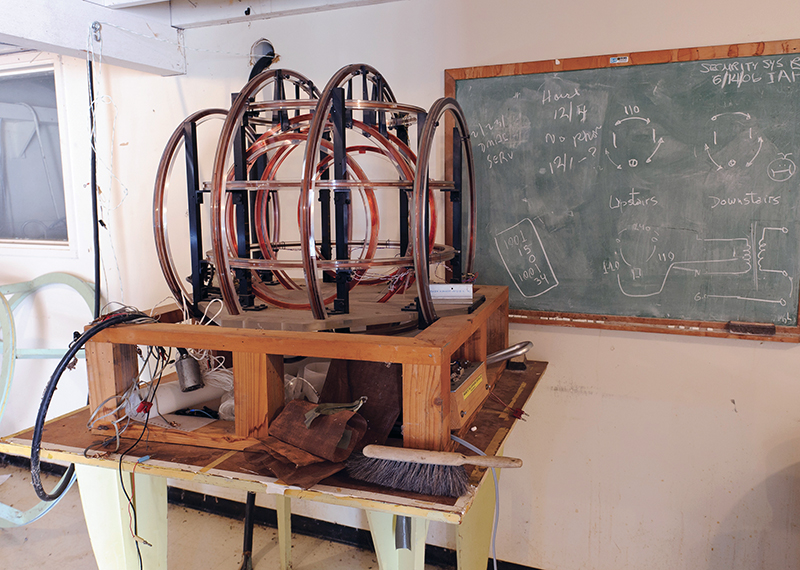 Helmholtz coils like this are used to manipulate magnetic fields. Two buildings at Ames Research Center helped test how Earth’s magnetic pull would interact with components of early spaceflight vehicles.

One of two specially designed and equipped facilities at Ames Research Center where magnetic fields can be manipulated. Geometrics used the buildings to help develop their magnetometers, used to detect irregularities in magnetic fields.