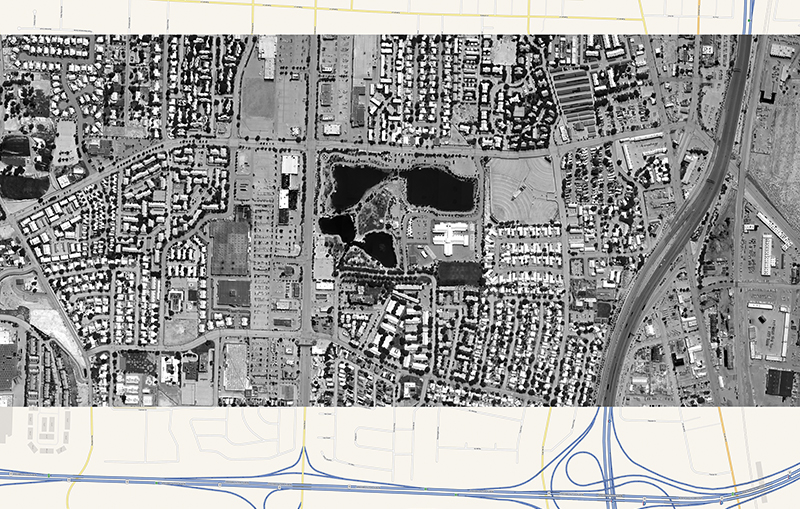 Finding a forest fire can be more difficult than some would expect. Seeing smoke in the distance indicates a problem, but determining the exact location where the fire started or has spread can be an inexact science, and mapping large areas with high resolution is time-consuming and expensive.

Government agencies have used various sensors and airborne cameras for fire monitoring, but the sensors could not always give an accurate read on the situation.

“NASA and a few other agencies had sensors that detected fires, but they all had a major flaw, and that was saturation,” says Jim Brass, chief of the Biospheric Sciences Branch in the Earth Science Division at Ames Research Center. “The fire’s signal was so intense it would overpower the sensor, and all we’d get, in most cases, was a big white blob.”

To best devise a plan for fighting fires, NASA and the U.S. Forest Service, among other agencies, needed to be able to detect fire lines and the amount of energy being expelled by the flames. “We scratched our heads and looked at satellite sensors, we looked at aircraft sensors and finally went over to our instrument folks and said we have the requirements for a sensor, but we’re not sensor builders,” Brass says. NASA used internal discretionary funding for a new sensor and devised the Airborne Infrared Disaster Assessment System (AIRDAS), a scanner that flew for the better part of a decade, monitoring the forests of Canada, Mexico, Brazil, and the United States.

After that time, NASA was interested in updating AIRDAS with newer technology for better data, so the Agency turned to industry for help. “Industry usually does it better and cheaper than we do and more than likely faster than the Agency could develop and test new technology,” Brass says.

There were a handful of companies that responded to NASA’s initial request for ideas, including Daedalus Enterprise, a Michigan-based company that specializes in airborne sensors. At the time, John Green was an engineer at the company, working on its Airborne Hyperspectral Scanner in addition to the MODIS Airborne Simulator for Ames and the Daedalus Airborne Multispectral Scanner operated by the U.S. Department of Defense.

Green says he had an idea for a sensor that would fit NASA’s fire detection needs, taking thermal infrared imaging and refining it to provide both a wider field of view and greater detail.

“One day, the idea popped into my head while I was mowing the lawn,” he says with a laugh. “It’s a big yard.”

NASA has a long history of Earth observation, including MODIS, or Moderate Resolution Imaging Spectroradiometer, an instrument that was first launched on the Terra satellite in 1999 and is capable of observing and mapping the entire planet once a day. In fact, one of MODIS’s first applications was fire detection, Green says.

MODIS uses a line scanner, also known as a “whisk broom scanner,” for the foundation of the sensor. The scanner moves back and forth as the satellite orbits the planet, collecting data from the Earth’s surface one pixel at a time. “For thermal imaging, the line scanner was the only way to get a really wide field of view,” he explains. The problem is, the resolution isn’t as great as it is when using a camera, which has a narrower field of vision but collects more pixels at once, and in greater detail.

Putting the two tools together, Green developed a thermal infrared imager that uses the best attributes of both line scanners and cameras.

“We came up with the idea to put a mirror in front of the camera. We take a picture, move the mirror, take another picture, move the mirror,” he says. “The result is, we have the high resolution of a camera and the wide field view of a line scanner. If you do it that way, simply, it’s faster, it can run at a higher altitude and cover more ground, so we end up with improvement in efficiency over the existing system of somewhere around a factor of three or four.”

The camera used in the new system, a quantum-well infrared photo detector, or QWIP, was originally developed at the Jet Propulsion Laboratory, Green notes.

Working with NASA, and in particular the Earth-science specialists at Ames, including Brass and Vincent Ambrosia—associate program manager for wildfires in the Agency’s Applied Science Program—helped Green understand exactly what kind of tool would best address the needs of the Agency and the Forest Service, part of the U.S. Department of Agriculture.

“They bring a ton of application knowledge,” Green says of his NASA colleagues. Meanwhile, Brass and Ambrosia say Green’s got a knack for successfully developing and designing sensors to meet NASA’s needs, pointing to a list of at least five Small Business Innovation Research (SBIR) contracts from NASA alone, not to mention other contracts from the Department of Defense and USDA.

As a result of his success with SBIR applications, the first of which was awarded in 2008, Green spun off his work at Daedalus and created Xiomas Technologies, based in Ypsilanti, Michigan.

“We consider him to be on the cutting edge of the entire multispectral technology industry, which we don’t have the luxury of being,” Brass says. “Where we’ve pushed Xiomas recently is that we want the instrument in a smaller package, with a smaller power requirement—but we still want the resolution.”

There are other companies in the marketplace that work in sensing technology, including a few specializing in infrared thermal scanners, but “none are really oriented toward the calibration of the measurement space that we want to look at, the high-temperature discrimination,” says Ambrosia.

The Wide Area Imager (WAI) aerial scanner made by Xiomas is capable of taking several kinds of images at once and overlapping the information onto a single output.

“When the Forest Service goes out to map a fire, they’ll take the long-wave infrared thermal image, a single-band image in black and white, which provides a specific location for the blaze,” says Green. The sensors also provide mid-wave infrared information, which is very sensitive to high temperatures. “By using the two bands, you can eliminate false detections from large, warm objects which look similar to small, hot objects,” he says. That allows a user to detect fires as small as three inches while also distinguishing between fires and, for example, a hot road in the summer.

The imager has other uses as well, and at least a handful of counties have contracted Xiomas for other aerial work. Jefferson County, Kentucky, for instance, had Xiomas use the WAI to map the county’s metropolitan sewer district in 2013. In one image obtained by the WAI, it is possible to detect liquid of some kind flowing from an industrial facility directly into a river in two different locations along the bank, Green notes.

Additionally, as the scanner is capable of imaging a larger amount of terrain in a shorter amount of time with greater detail than a typical line scanner or thermal camera, it is able to scan an entire county at a reasonable cost. Whereas aerial infrared photography might need 8 to 10 days spread out over a month due to weather constraints to fully capture a geographic area, the WAI can complete it in a few evenings.

“With the next version of the WAI, we’ll be able to do a whole county in one night,” Green says. 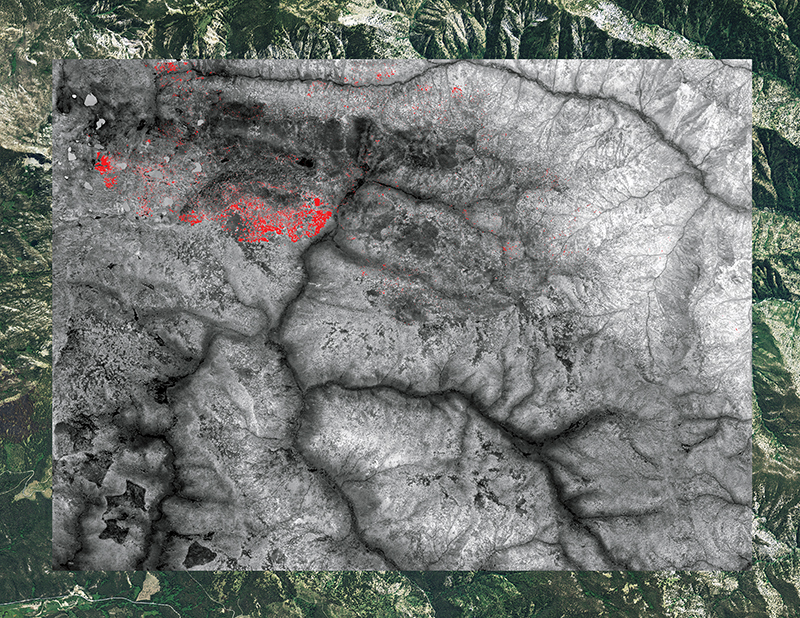 Combining elements of both a line scanner and a digital camera, Xiomas has developed an aerial scanner that can pinpoint the presence and location of a forest fire from a great distance and indicate its intensity.

Xiomas has combined the resolution of a digital camera with the depth of field offered by “whisk broom scanners” capable of photographing large geographic areas in shorter periods of time with greater detail than previously available.