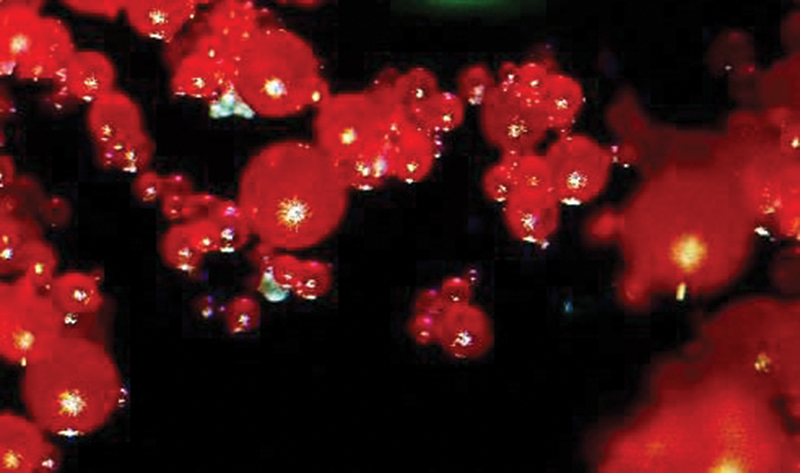 In the early 1980s, NASA engineers and researchers from the Jet Propulsion Laboratory (JPL) and Marshall Space Flight Center were trying to devise a way to create hollow, spherical, latex microcapsules capable of containing live cells to use for time-released antibiotics or targeted doses of medication. The U.S. Army Institute of Dental Research had asked NASA for assistance in developing the capsules.

NASA found it nearly impossible to grow consistently spherical microcapsules larger than 10 microns on Earth due to gravitational interference, so instead the Agency turned to space. A team of scientists, led by chemist Dale Kornfeld from Marshall, created a machine that operated in microgravity, allowing the capsules to grow spherically instead of oval-shaped. The experiment, carried out on multiple Space Shuttle missions, proved capable of consistently growing larger spherical, latex microcapsules, up to 30 microns in size compared with previous spheres measuring 3 microns or less. The spheres became the first product made in space and sold on Earth, and the quality was so consistent that the U.S. National Bureau of Standards recognized the spheres as a national reference material for measuring 10 micrometers.

Eventually, Kornfeld and his colleagues were able to create uniformly spherical microcapsules on Earth by incorporating a gentle stirring mechanism in their machine to prevent the latex spheres from sticking together, an innovation he patented.

In the mid-1980s, Joe Resnick had completed his undergraduate work at the University of Pittsburg and moved on to the Military College of Vermont, now Norwich University, where he studied on a NASA fellowship. He received a call from his mentor, Paul McWilliams, director of the NASA Industrial Application Center at the University of Pittsburgh, offering the opportunity to go to Florida and help the Agency formulate a new external coating for the wings of the Stealth Bomber.

It was during his time there that Resnick met Kornfeld and his team, and he began working to flesh out an idea he had for microcapsules made using beeswax, building on Kornfeld’s work in space. Resnick obtained a license for Kornfeld’s machine and began modifying it.

The system he developed forms the spheres out of liquefied wax using low-frequency sound waves, which break apart the stream of wax at regular intervals using a timer chip. Resnick’s modified device also uses a proprietary method to counteract the effect of gravity on the liquid—think of the way soap bubbles always have a slightly heavier side when they break free from a bubble wand—keeping the capsules it forms perfectly spherical. Now up to 150 microns in size, the hollow capsules can be filled with live cells, powders, gases, or other materials. Resnick filed for a patent for his system in 1986, the first of 26 he’d go on to secure.

After patenting the device, Resnick teamed up with Pittsburgh-based Petrol Rem Inc. to market the Petroleum Remediation Product (PRP), beeswax capsules filled with a variety of yeast capable of breaking down hydrocarbon bonds in oil. The capsules repel water and absorb oil, which is consumed by the yeast and turned into water and carbon dioxide. When the internal pressure becomes too great, the capsules explode and release the harmless byproducts into the environment.

First used to remediate water in Prince William Sound in Alaska following the Exxon Valdez spill, PRP was later used to clean up the Gulf of Mexico following the Deepwater Horizon spill in 2010. Spun off into a series of products, including Bio-Sok, BioBloom and the Bio-Sok Bilge Maintenance System, PRP was inducted into the Space Technology Hall of Fame in 2008 (Spinoff 1994, 2006).

Resnick later started his own company, Lenoir, North Carolina-based RMANNCO Inc., to continue developing the microcapsules. Thanks to the availability of stainless steel tubing in ever-smaller diameters, the capsules can now be made in sizes ranging from 1 to 8,000 microns, or from one-fiftieth the diameter of a human hair to the size of an average ladybug.

Being able to make the capsules smaller has increased their possible uses, Resnick says.

NASA had envisioned using microcapsules for time-released antibiotics, and Resnick has worked with medical companies on products incorporating microspheres that achieve that goal while also increasing the proportion of received medicine or vitamins that are available for use by the body. The more efficiently the body can process a dose of medication, the more active ingredients in each dose can be reduced, he says, thereby decreasing the amount of medicine wasted and potentially shortening treatment time.

Resnick’s improved microspheres can also be manufactured to adhere to substances, a feature that’s attractive to food manufacturers. As he points out, food salted at the table tends to taste saltier than food prepared with an equal amount of salt, because the seasoning is on the surface of the food, rather than mixed in, and therefore hits the tongue first. Working on the same principle, Resnick has partnered with the North Carolina AgBiotech Center, located in Research Triangle Park in Raleigh, and Flavor Sciences Inc. of Lenoir to use the capsules to create new flavor enhancers. The ability of the capsules to preserve ingredients and stick to the food reduces the amount of ingredients wasted through aerosol or powder applications.

He’s also worked with cosmetics manufacturers to incorporate the wax microcapsules in lipsticks. “Microcapsules are produced to enable microencapsulation of the basic tint used as the primary color or shade,” he explains. “Once applied, the wearer can refresh the color simply by pressing her lips together, breaking the microcapsules open.”

Most recently, Resnick has used his NASA-derived microspheres to develop a new supplemental food supply for the Melipona beecheii variety of stingless honeybee. Through research conducted in both the United States and Malaysia, Resnick has developed a hybrid pollen using waxy microcapsules—which cling better than natural pollen to the bee’s bodies—filled with a synthetic stevia solution that can be used as a source of food for the bees during the winter and monsoon seasons, when other sources of pollen and nectar are scarce.

“Using the microcapsules as the delivery system, I can place any physiologically compatible substance into the microspheres and feed it directly to the bees,” he says. Later, when the hive’s honey is harvested, it could be packaged and sold as a specialty honey that, thanks to stevia’s use as a food source for the bees, is suitable for consumption by people with diabetes.

Finally, Resnick also has been working on a treatment for working and military dogs injured in the field. The product, called Poochie-Peds, is made from beeswax microcapsules containing essential oils and antiseptics, and it works in just seconds to seal injuries to the sensitive pads on the bottom of dogs’ feet, which can be fatal if left untreated for too long.

He credits NASA and his original partnership with the Agency for much of his success. “I just can’t say enough good things about NASA,” Resnick says. “I know firsthand the opportunities NASA innovation provides: for 30 years, I’ve worked with everything from monomers, isomers, and oligomers to oils, powders, sprays, and the heaviest gas in the universe, and I don’t see an end to it.”

Abstract
Tiny capsules made of beeswax, dreamed up by engineers at Marshall Space Flight Center and perfected by Lenoire, North Carolina-based RMANNCO Inc., have revolutionized the way oil spills are cleaned. Joe Resnick, who worked with NASA to perfect the capsules in the 1980s, has made them even smaller and has developed a host of products, ranging from medical kits for dogs to synthetic pollen that could result in natural honey suitable for diabetics. 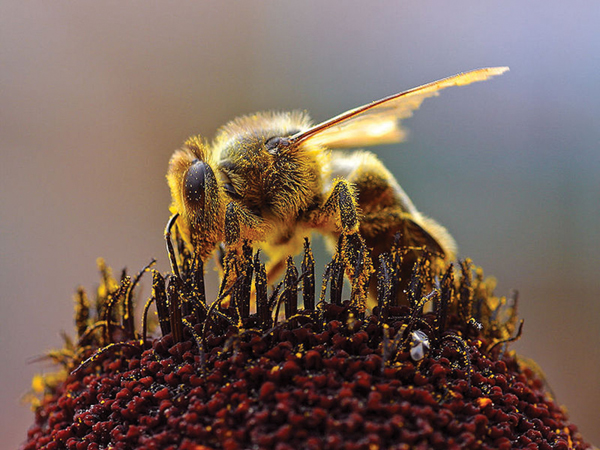 One new use of RMANNCO’s microcapsules, made from beeswax, is a hybrid pollen made from wax and extract from the stevia plant. The pollen clings to the bees better than regular pollen, and the honey the bees make can be sold commercially for people who cannot consume regular honey. 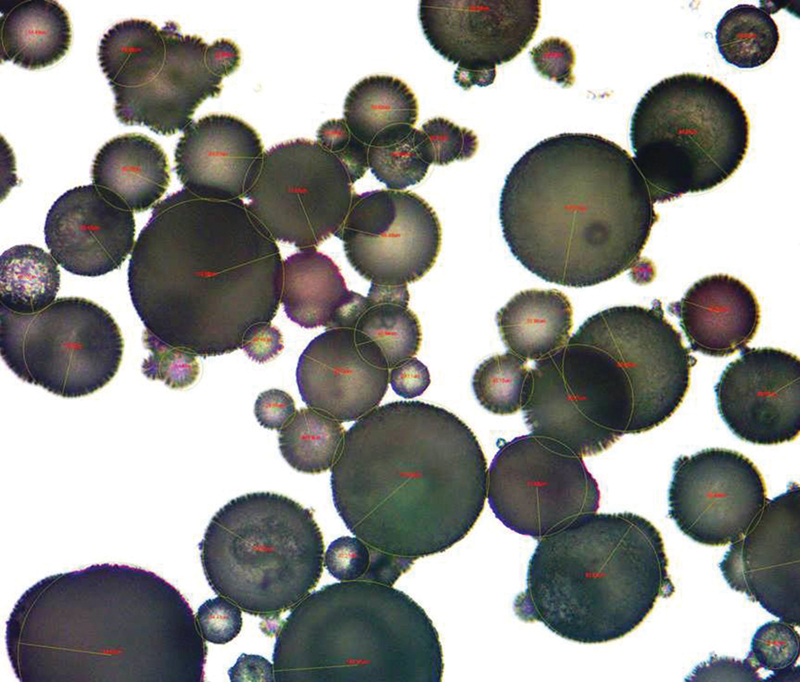 Microcapsules made from beeswax are a safe, natural way to enhance the flavor of a product such as grape juice.

NASA developed a method for making spherical, uniformly shaped microcapsules. Joe Resnick, a scientist and inventor, built on NASA’s research and now works with companies to incorporate microcapsules into products ranging from foods and beverages to cosmetics, like these capsules used in lipstick to refresh color after application.