There has been much talk of self-driving cars lately, as various automakers and technology companies such as Google race to put the first fully autonomous vehicle on the road. But in farm fields, where driving is more loosely regulated, farmers have enjoyed self-driving tractors for more than a decade, in part due to a partnership between John Deere and NASA’s Jet Propulsion Laboratory (JPL).

The Global Positioning System (GPS) was still new in the mid-1990s when John Deere, based in Moline, Illinois, started using it to enable precision agriculture.

Working primarily with NavCom, which the company later purchased, John Deere engineers began developing GPS receivers that enabled capabilities such as yield mapping, which incorporates mass flow and moisture data from sensors on a harvesting combine with GPS location data to determine how much of the harvest is coming from each part of the field. Such information can help farmers allocate future resources and determine which hybrids and management practices are the most productive.

The challenge was that uncorrected GPS can be off by up to around 30 feet due to data errors, drift in the GPS satellites’ internal clocks, and inaccurate orbital parameters. What the company ultimately wanted was a system that could correct the signals with a high enough accuracy that GPS could be used to actually guide the tractor.

Meanwhile, scientists at JPL, where the first global tracking system for GPS satellites had already been developed, were working to stream satellite tracking data in real time via the Internet, rather than collecting it intermittently by phone lines. A major infusion of research and development funding from the Federal Aviation Administration, which wanted to provide pilots with reliable GPS data, enabled them to develop the necessary software, says Yoaz Bar-Sever, who was supervisor of the Orbiter and Radiometric Systems group at JPL at the time.

The result was the Real-Time GIPSY (RTG) software. GIPSY refers to the GNSS-Inferred Positioning System, wherein GNSS stands for Global Navigation Satellite System. One of the world’s more complicated acronyms, RTG also ended up being one of NASA’s most important contributions to modern society, enabling highly accurate GPS navigation anywhere on the planet.

“Once we were able to demonstrate real-time tracking on a global scale together with real-time data processing, it represented a breakthrough capability, and we were approached by many companies,” Bar-Sever recalls. One of those was John Deere.

By this time, in late 2000, the company had just introduced its StarFire GPS receiver, which was capable of accuracy down to about six inches.

A number of companies purchased—and continue to purchase—the real-time satellite clock and orbit corrections RTG produces, but in 2001 NavCom licensed the RTG software itself and also contracted with JPL to receive data from the center’s global network of reference stations.

While it was testing the JPL-based system in the field, the company continued to work on its own technology for correcting GPS signals and released its first GPS-based guidance system for tractors in 2002. The system, known as AutoTrac, was initially available only in North America and Australia, with Europe following shortly thereafter. By the following year, John Deere had begun developing a highly accurate self-guidance system based on a technique known as real-time kinematics (RTK).

While it was accurate down to about an inch, the RTK-based navigation system wasn’t entirely reliable, as its radio signal could go down or be lost behind a hill, says Terry Pickett, currently manager of the Advanced Engineering group at John Deere Intelligent Solutions Group. Moreover, it was expensive and required the purchase of one or more signal towers.

By 2004, the company officially released the first StarFire receivers to tap into NASA’s global network of ground stations and incorporate JPL’s software, which it licensed. “John Deere based their system on our technology lock, stock, and barrel,” Bar-Sever says, noting that the agreement also allowed JPL to use John Deere’s GPS reference stations. “We linked our systems quite tightly.”

“It was a great springboard for going from a more U.S.-based system to a global system,” says Steve Wilson, who joined NavCom as the GNSS product manager in 2002, noting that engineers at the company and JPL worked together to improve the software. “In the early years, it was a team effort to have the network up and running and data flowing in.”

The system was accurate down to four inches, which was a significant improvement to AutoTrac. More importantly, with this solution, John Deere could finally offer self-driving agricultural equipment to its customers worldwide.

“That allowed us to get machines in the field all over the world that would guide themselves with a lot less overlap, and that meant a lot to our customers,” Pickett says.

Typically, when a farmer crisscrosses a field pulling a seeder, plow, or other equipment behind the tractor, the rows that are created overlap by about 10 percent, Pickett explains. This means a significant portion of the field receives double the necessary seed, fertilizer, and pesticide, and the job also takes longer than necessary.

Eliminating overlap also cuts down on fuel costs, wear and tear on the machinery, and the time for which a farm had to pay a tractor operator. (An operator is still required in the cab to monitor operating conditions and avoid collisions.) And higher accuracy means more reliable yield maps.

The RTG-based system was more affordable than RTK-enabled guidance, but it could also be coupled with John Deere’s RTK solution for a feature called RTKX. Available for AutoTrac, RTKX relied on the low drift of the corrected GPS signal to extend RTK-quality accuracy for up to 15 minutes whenever the RTK radio link was lost, a common occurrence in the hills of many farming areas.

Another feature introduced in 2004 was Swath-Control Pro, which allowed a sprayer or spreader, and eventually planters, to turn off parts of the equipment overlapping areas that already had fertilizer, pesticides or seed applied, eliminating overlap entirely. The second-generation StarFire receiver enabled the iTEC-Pro capability, which the company released in 2007. This allowed a tractor to finish a row, lift the equipment it was pulling, turn around, and pick up exactly where it left off, all with no input from the driver.

“Self-guidance had a big impact on the cost of the product farmers were producing, the amount, and often the quality,” Pickett says, adding that AutoTrac was shown in several university trials to save producers on the order of 15–20 percent through efficiency and reduced input costs. In addition, many customers claim to gain improvements in yield of up to 10–15 percent by better management techniques enabled by yield mapping and analytics used with that data.

All the while, John Deere was perfecting its own means of precision guidance, and the company let the NASA license expire in 2015, now relying on its own system.

But Pickett says the accuracy that originally came from the company’s partnership with JPL not only gave rise to significant improvements to John Deere’s guidance technology but also served to help popularize the notion of precision agriculture. “Guidance was what drove it, and what drove guidance was accuracy,” he says.

Wilson notes that StarFire receivers became more accurate than the GPS on a military fighter jet. “Yoaz and his team know what they’re doing, and we were able to leverage what they’d developed and provide a very good service,” he says.

Abstract
With a license for software created by the Jet Propulsion Laboratory (JPL) to stream corrected GPS data and a contract to receive data from JPL_s global network of reference stations, Moline, Illinois-based John Deere released StarFire receivers that let tractors drive themselves, were affordable, didn_t require a local radio tower, and could be used all over the world. Automated guidance reduces the time and resources needed to care for fields and increases crop yield and quality. 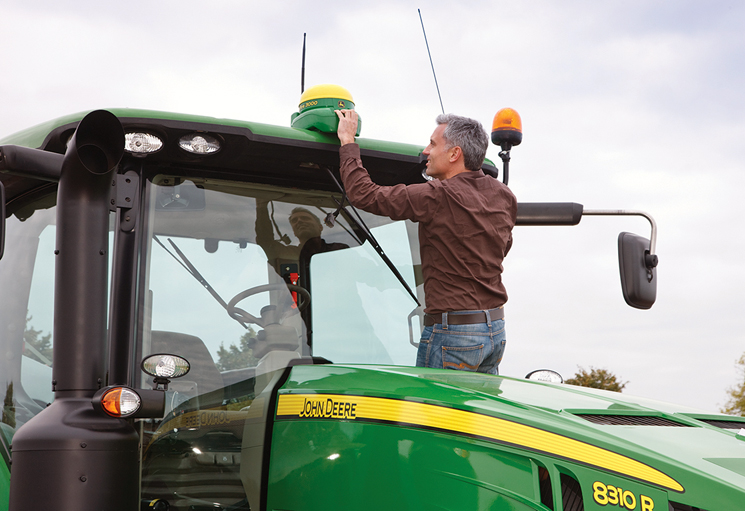 A long partnership with the Jet Propulsion Laboratory helped John Deere spread self-driving tractor capabilities all over the world, lowering costs and improving yields for farmers while popularizing the idea of precision agriculture.

For more than a decade, John Deere’s StarFire GPS receivers used NASA’s global network of ground stations and the JPL software, which the company licensed, to enable self-guided tractors. 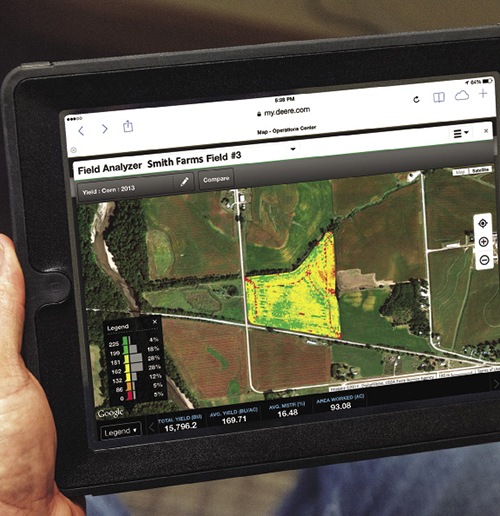