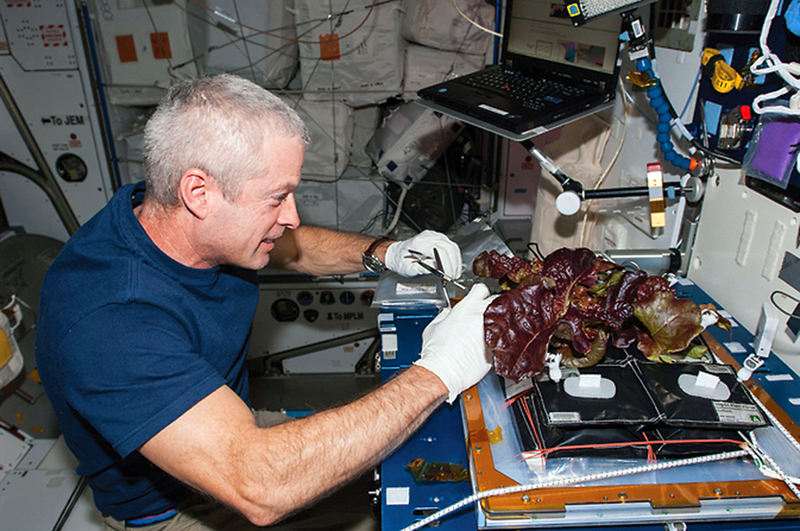 Astronaut ice cream may be an exotic treat for kids, but for real space explorers, it turns out a fresh, crunchy salad could sometimes really hit the spot. The ability to grow food in space could also prove crucial for longer-duration voyages envisioned for the next decades.

Growing plants in a spaceship, and one day on another planet, is a complicated endeavor, as Gioia Massa, science team lead for the NASA Veggie project at Kennedy Space Center, will tell you. But one tool making it much easier is a specially formulated fertilizer, developed years ago with NASA help, that has also drawn huge accolades from growers on Earth.

The fertilizer, blended by Sarasota, Florida-based Florikan, is coated in polymers that control when and how much of each ingredient—macronutrients like nitrogen, phosphate, and potassium, and micronutrients like magnesium and zinc—is released over six months to a year.

“We don’t use soil, because soil is very nonuniform and makes it hard to ensure a good outcome,” Massa explains. Instead, the Veggie plant-growth platform aboard the International Space Station (ISS) uses a porous, baked-clay substrate. That clay holds the roots and the water in place, but it doesn’t provide any nutrition for the plants—that all comes from the fertilizer.

“Having the ability to add a controlled-release fertilizer—which adds the right amount of nutrients over time without any mixing or any chemicals that you have to measure out—makes it much simpler,” Massa says.

There is still research being done to optimize the fertilizer for different plant types, including modifying the blend of ingredients and release rates and examining how different fertilizers impact the nutrient content of the harvest. But using a single-application, controlled-release fertilizer means that, day-to-day, the astronauts and the Veggie research team can focus on other challenges, like how often to water the plants and how best to use lighting to promote growth.

Their efforts have already borne fruit—or, technically, leaves—with red romaine lettuce grown and eaten on the ISS in 2015, and zinnias cultivated through 2016. Future experiments are planned for 2017 and 2018 to grow dwarf tomatoes and Chinese cabbage, with a second Veggie plant-growing module to be sent up to increase the variables able to be tested.

“We’re learning a lot. We’ve certainly had our challenges, but we’ve also had tremendous success,” Massa says. She is excited about breaking new ground with these experiments—and confirms Florikan controlled-release fertilizer will continue to play its important role.

Florikan founder Ed Rosenthal didn’t intend to push the frontiers of where plants are grown when he first began developing his award-winning fertilizer. But he saw how fertilizers, including those sold by the company he and his wife had founded in 1982, were getting used, and saw an opportunity.

“I went to see a very good friend of mine: a PhD, who produces ornamental plants,” Rosenthal recalls. “He’s throwing bags of water-soluble fertilizer, must have been 40 or 50 bags, in the tank. And as I’m watching it, some is floating to the top, some is segregating to the bottom. He has to turn on an agitator just to keep the fertilizer in the solution.”

Rosenthal was dismayed—if farmers were dousing their plants with this poorly mixed solution, a huge proportion of the nutrients would leach out into the groundwater. That was terrible for the environment and not very helpful for the plants.

He started studying the problem and eventually told the grower, “I believe you’re wasting more than two-thirds of your nitrogen: it’s going straight into the groundwater.”

The segregation was occurring because different nutrients dissolved in water at different rates, and that gave Rosenthal an idea. Although not a chemist by training, by 2002 he’d spent decades working with fertilizers and polymers at Florikan and before that at a company that manufactured polymer-based plastic plant containers.

“I wondered if I could separate each nutrient based on its relative solubility and when it was needed by the plant,” he says. If he could then coat each nutrient in a different polymer, some with a larger-porosity polymer to let a lot of water in to dissolve the substrate and release the nutrient as quickly as possible, some with a smaller porosity to slow down the release, he thought he could create a fertilizer that delivered exactly the right amount of each nutrient at exactly the right stage of growing.

Florikan’s clients had typically been applying fertilizer monthly. “For example a nursery with 100 acres of potted calamondin orange,” would have a huge workforce applying a tablespoon per pot, 12 times a year. Rosenthal’s new staged-release fertilizer would get the same results with just four tablespoons applied once a year, according to his calculations.

He brought the prototype to a leading nursery grower who was skeptical but agreed to let Rosenthal try it out on a few acres of plants. “In six months, when the grower saw our plants looked the same as the ones he had already hit with six applications, he said, ‘Ed, you got any more of that stuff?’”

The new product innovation, dubbed Staged Nutrient Release (SNR), was quickly embraced by the market, and in 2004, Florikan was recognized by the state of Florida and by the National Society of Professional Engineers for making one of the year’s most innovative new products. The latter award came with a special perk: 40 hours of free consulting with a Federal agency to take the innovation forward. Rosenthal chose NASA.

“I knew NASA was working with some space-age polymers, really sophisticated polymers that had yet to make it into the mainstream commercial field,” he says. He was connected with Kennedy researcher Chris Gilfriche in October 2005 through the Space Alliance Technology Outreach Program (SATOP).

At the end of the 40 hours, the NASA researchers recommended a whole new approach: coat the nutrients in a single, impervious polymer, and then treat them with a chemical to open up pores to the exact specifications required. That spurred two more years of lab work to perfect the formula, including a continued back-and-forth with the SATOP group. By 2008, Florikan had two new patents, one for staged nutrient-release fertilizer and another for the polymer coating it was using.

“The ornamental industry—the nursery industry producing foliage plants—was the first to embrace the change to the controlled-release fertilizer,” Rosenthal recalls, saying he soon had enough business to open a coating facility in Florida. Since then, he has sold both patents to agribusiness giant J. R. Simplot Company, which has introduced the technology across the western United States and overseas. Florikan retains a license in perpetuity to manufacture and sell the fertilizer in 32 eastern U.S. states, and its business has also grown in recent years, prompting a need for a brand-new 85,000 square-foot plant in Hardee County, Florida, and creating some 80 new jobs.

Rosenthal credits a huge portion of this success to the guidance he got from NASA. “For us to be able to coat the fertilizer here in Florida and introduce it into the market, that was a result of NASA’s SATOP help, no doubt. It made the product commercially affordable and made us become a huge manufacturer.”

The key advantage to Florikan’s staged nutrient-release fertilizer is that growers need to use far less of it, far less often than traditional formulations. That significantly reduces the harmful environmental impact of nutrient runoff, and it also means less labor and lower costs for growers.

“With fertilizer, you want to put it where you intend it to be used, because if it goes into the groundwater, it may create problems,” Rosenthal explains. Nitrogen, in particular, has been linked to harmful algal blooms, which can release toxins that harm, and even kill, marine wildlife including dolphins, manatees, and sea turtles.

“If you can apply less fertilizer overall, there is less of a potential impact from all nutrients. Applying fertilizer once a year or once every six or nine months is better than every 30 days.”

One of Florikan’s early formulations was called Florikan Nutricote 18-6-8, for its ratio of nitrogen, phosphate, and potassium, and it was designed specifically for ornamental plants so they would get the right amount of each nutrient when they needed it without waste.

“Florikan’s research for continuous improvement in controlled-release fertilizer formed the basis for the successful introduction of Nutricote in the United States,” Rosenthal says. “From there, Florikan’s commitment to innovative technology helped form the NASA SATOP partnerships, resulting in new polymer coatings for the custom-blended Florikan Nutricote and Florikote fertilizers and now for Simplot’s patented Gal-XeONE product line.”

As Florikan has grown, it has expanded its offerings into other types of plants, creating special blends for citrus groves and, more recently, sugar cane, where standard practice had been to drop fertilizer from airplanes five times a year. Florikan proposed a new fertilizer that farmers could apply just once when the cane was first planted. “They’re now buying significant quantities for several thousand acres. Without NASA and SATOP, none of it would have happened,” Rosenthal says.

“In a global world, it’s ultimately about feeding more people in an efficient manner that is sustainable,” he emphasizes, saying this enhanced-efficiency fertilizer does that extremely well.

And when NASA called Florikan for help with its Veggie project, Rosenthal created a new blend for flowering plants, like the tomatoes next heading up to the ISS. The new blend, which Florikan has since also released commercially, has a 14-4-14 nutrient ratio, designed to be applied every 100 or 180 days. “If we’d talked to him ahead of time,” Massa notes, “we’d probably have tested that 14-4-14 formulation for the zinnias.”

“NASA’s expertise helped us advance our development by years,” Rosenthal emphasizes. “We were happy to pay it back.”

Abstract
Fertilizer helps crops grow better, but nutrient runoff can lead to serious environmental problems. Ed Rosenthal, founder of Sarasota, Florida-based Florikan, had an idea to control the nutrient release to avoid runoff and maximize the benefit to the plant. He perfected the formula thanks to 40 hours of NASA consulting, and the fertilizer is now sold around the world_and also used on the ISS for project Veggie. 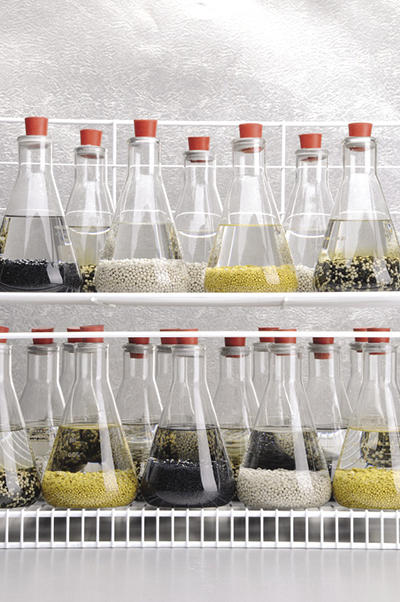 Every batch of Florikan coated fertilizer is tested to ensure the polymer coating allows the nutrients to dissolve at the expected rates. Small samples are placed in distilled water and held in an incubator at 100 ºF for seven days. The quality control team checks the sample after one, three and seven days. 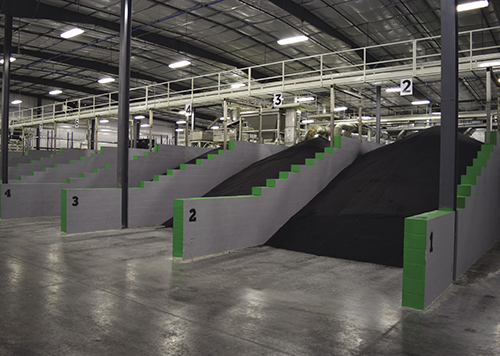 Here, large batches of the Florikan fertilizers await quality control testing before being bagged up and sold. The high-tech process to coat the fertilizer in a porous polymer to control how quickly the nutrients dissolve in water was perfected with help from NASA. 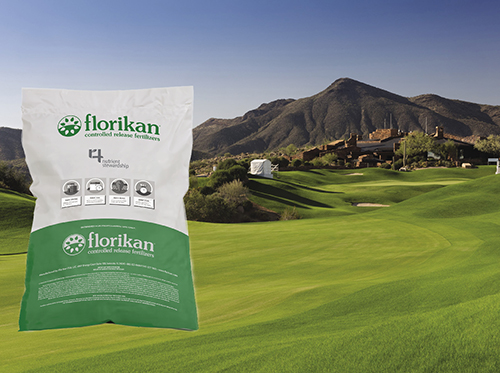 Fertilizer made with Florikan’s patented formula, now owned by J.R. Simplot and sold as Gal-XeONE, nourished this lush grass at a golf course in Arizona. J.R. Simplot was interested in the product because it was more efficient and better for the environment.