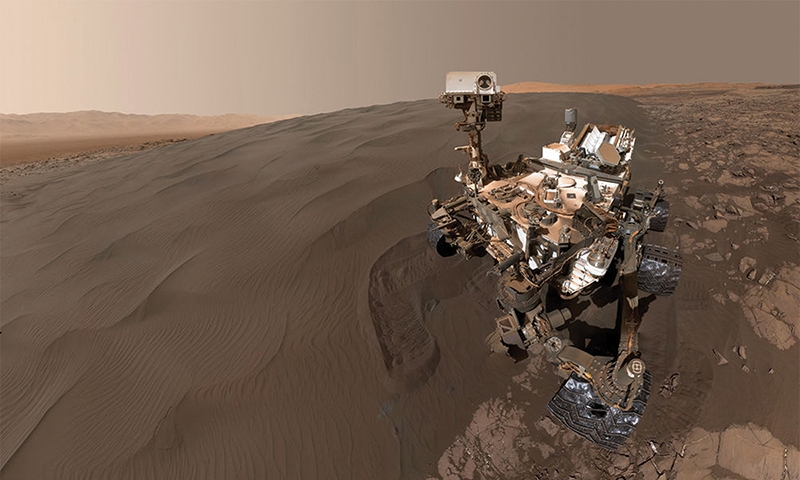 Mineral Analyzer Shakes Answers Out of Soil and Rocks

How do you search for signs of life on a planet you’ve never been to? If you’re NASA, you send robots to do your dirty work, sifting through the soil and rocks for clues. The tools sent with those robots need to be hardy and maintenance-free—qualities that make them appealing here on Earth as well.

On the Curiosity rover, a tool called CheMin—short for Chemistry and Mineralogy—is helping scientists determine just what minerals make up the Martian landscape and whether organisms, single-celled or more complex, could once have thrived there.

CheMin sends an X-ray beam through tiny samples of Martian soil or rock, recording how the beam scatters as it bounces against atomic planes of the different minerals contained within. The technique, called X-ray powder diffraction (XRD), has been around for a long time, but the tools commonly used were not practical for a robotic mission millions of miles from the nearest human hands.

“To do powder diffraction and get good data, you need to have roughly a million grains of the same type within the volume you’re analyzing,” says Philippe Sarrazin, who was the lead developer of CheMin at Ames Research Center and later founded a company that sold commercial instruments based on its technology. Technicians would grind a fine powder, with grains just 10 to 50 microns in diameter, press it into a flat cake between two pieces of plastic, reminiscent of a microscope slide, and put it in a massive XRD machine, which points an X-ray beam at it from different directions.

Absolutely no part of that process made sense for a robot on Mars: “Everything relies on very precise motions and very heavy equipment,” Sarrazin says.

The biggest problem was that, to make the instrument smaller, the sample chamber also had to be smaller. But since traditional XRD still requires a million grains to get enough data points, that meant the grains needed to be even smaller as well. NASA engineers first considered making grains smaller than one micron in diameter, or less than a hundredth the width of a human hair. The task proved basically impossible, Sarrazin says: by the time you ground the material that finely, even if you could do so reliably on Mars, you’d ruin the crystalline structure you were attempting to analyze.

Then they stumbled onto a game-changing discovery: when you vibrate a bed of grains, they flow in a predictable, cyclical pattern. It’s called granular convection, and it had been seen before, but no one had ever thought to apply it to XRD. The CheMin team quickly realized this phenomenon could solve all the problems they were encountering.

“All we had to do is shake constantly, and the powder would flow. We could shoot a small X-ray beam and material comes into it and out of it. It also turns the grains around, and by turning the grains, offers different crystalline orientation, which further enhances the quality of the data,” he explains.

Because they were able to see grains from so many different orientations, they could use fewer, bigger grains, about the texture of sand. That was a huge plus, explains David Blake, CheMin principal investigator at Ames: “Bigger grains are easy to transfer from one place to another. They’re also easy to make: when the drill operates on Mars, it creates samples that are about 150 microns and below.” All the sample-handling instrument had to do was pour the dirt into a sieve and shake that into the CheMin sample chamber.

Sarrazin immediately began working on a design for a miniaturized XRD device using a shaker hacked from a $2.99 RadioShack buzzer. “It was nothing like the final instrument, but it made the point. If you vibrate the material, you can get good data from poorly prepared samples,” Sarrazin recalls.

“That was the eureka moment. I remember going backand telling my wife, ‘This is going to Mars. It’s going to make it work.’”

Sarrazin worked with NASA lawyers to file for a patent covering the vibration technique in 2003, knowing it was something that could have applications in industry. Shortly afterward, he left NASA to form his own company, inXitu Inc., but his work on the instrument continued.

In 2004, Ames granted inXitu two Small Business Innovation Research (SBIR) contracts to pursue the project, which was now destined to travel to Mars on the Curiosity rover. Although the vibration concept worked, there were still a number of practicalities to figure out, including how to vibrate the sample at high intensity without vibrating everything else at the same time.

Sarrazin also needed to test whether the process would work on Mars, where gravity is around a third of Earth’s gravity. The models the team was using suggested they would need to scale down the shaking proportionally. They didn’t have the funding, though, to run tests to verify this on suborbital flights, which can run $750,000 each. So Sarrazin, who was earning his pilot license at the time, devised an enterprising solution.

“With my instructor, we went over the ocean and did our own microgravity flight with a small Cessna. Doesn’t replace a proper microgravity test, but we didn’t have that, so it was the only data point we could collect for the money we had at non-Earth gravity.”

“We couldn’t sustain low gravity for more than a few seconds, and our results were not very precise. But what we found more or less validated the model,” Sarrazin says.

The design for CheMin was completed at the Jet Propulsion Laboratory, and the instrument incorporated into the Mars Science Lab, where it is successfully analyzing samples gathered during Curiosity’s trek across Mars. “We have actually seen suites of minerals that suggest that conditions were suitable, and energy was available, to early organisms, if they existed,” Blake reports. “It’s really exciting.”

And Sarrazin was able to use the work he did for CheMin to create a product for his new company: “I put in everything we had developed in CheMin: the same technique for collecting the sample, the same methods to for processing the data. All the things I’d put into the prototypes for NASA, I put into this first product we developed.”

The product incorporated the work he’d done during the SBIR contracts, and it was also based on a license for the patent he filed while working for NASA.

inXitu’s XRD mineral analyzer was unlike anything else on the market: it was small, easy to use, and extremely rugged, and the company could sell it at a fraction of the cost of other instruments.

“There was a lot of expertise that went into using an XRD instrument,” says Sarrazin of the previous laboratory-based versions, especially in preparing the sample to the correct specifications to get a good reading.

His new design “allowed a very simple sample prep method that you can do in the field, whether it’s hot or cold or you’re wearing gloves,” he explains: take a hammer and knock out a rock fragment, and use that same hammer to crush it. Then pour it into the sample cell; the XRD analysis is “pretty much a one-button operation.” The unit could be used by anyone in the field, eliminating the need for a highly-trained technician to perform the XRD analysis or the long wait for a sample to be sent to a lab for analysis.

Olympus, based in Waltham, Massachusetts, bought inXitu in 2011 and now sells the XRD device in two models: TERRA and BTX II Benchtop. The instruments are largely identical, though the Terra comes in a rugged case and runs on a battery pack.

“With TERRA, you can be on the side of the mountain taking rock samples, doing XRD right at the site,” Walker says, and where laboratory XRD equipment can cost hundreds of thousands of dollars, the Olympus models cost less than a hundred thousand.

One of Olympus’ largest markets is oil and gas exploration: by analyzing the minerals the drill is encountering, you can determine when you’ve hit the “pay zone” where the oil or gas is. “Particularly in shale gas, where they use directional drilling, XRD analysis is even more important, because they will take a look at the mineralogy to determine where they want to steer the drillhead,” Walker explains.

Pharmaceutical companies and drug watchdog groups are also big customers. They use the XRD device, typically the BTX II Benchtop model, to test drug composition, to ensure the manufacturing is being done correctly, and to weed out counterfeits. “We’re also expanding into areas of hazardous materials identification, important for global security. Quick identification of explosives and other hazardous materials is helping to enable the safety and security of the world,” Walker adds.

Sarrazin credits a huge part of the success of the XRD instrument, both at NASA and in the private sector, to the SBIR contracts he got in 2004. “Both sides really benefited from the SBIR program, and none of that would have happened without that seed money.”

Abstract
A small, rugged X-ray diffraction (XRD) tool, CheMin, went to Mars on the Curiosity rover, and one of its inventors, Philippe Sarrazin, started a company to sell devices based on the same technology. The final product incorporated SBIR-financed work as well as a license for a patent filed while Sarrazin worked at Ames Research Center. Now Olympus Scientific Solutions America, based in Waltham, Massachusetts, sells the XRD devices to mining and drug companies as well as Government drug watchdogs. 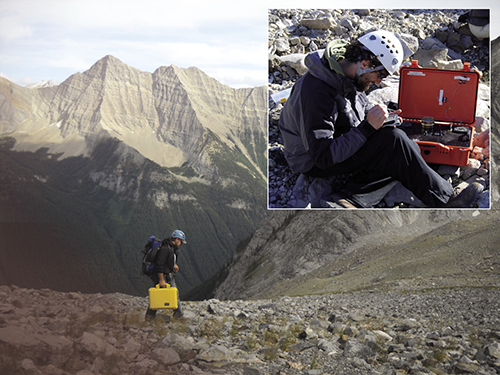 In commercial mining, XRD can give detailed information about the minerals found on site, which the geologist or mine manager can then use to make important decisions about the viability of and plan for the mine. Olympus Scientific Solutions America makes a portable, rugged, easy-to-use device called Terra, based on the technology used in CheMin, which provides answers far more quickly than if samples need to be sent back to a central laboratory. 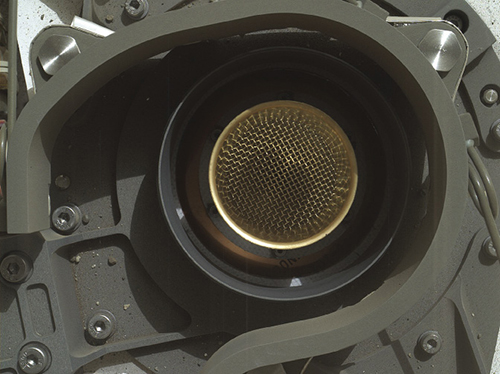 The key innovation of CheMin was that it didn’t require samples to be finely ground into powder. In fact, the rock grains need only to be small enough to fit through this screen installed on Curiosity, through which the Mars rover funnels the samples it collects with its robotic arms.

This self-portrait of NASA’s Curiosity rover was taken at the Namib Dune on Mars, where activities included scooping up soil for analysis. One tool it uses to analyze the minerals in the soil is an X-ray Diffraction (XRD) device called CheMin, designed to be smaller, more rugged, and more automated than previous XRD machines.